The Broken Land is a late 50s Western, if you’re with me. I mean that it has all the attributes of a 1950s oater, with a straight-down-the-line plot and no post-modern revisionism or self-questioning, even if it was made in the 60s. It’s nice to look at, being in CinemaScope and Technicolor, and well shot, by Floyd Crosby, no less, in lovely ‘Western’ locations round Old Tucson and the Apacheland movie studio (started in 1969 and burnt down in 2004). The cast is slightly less than stellar, though it has its interest. 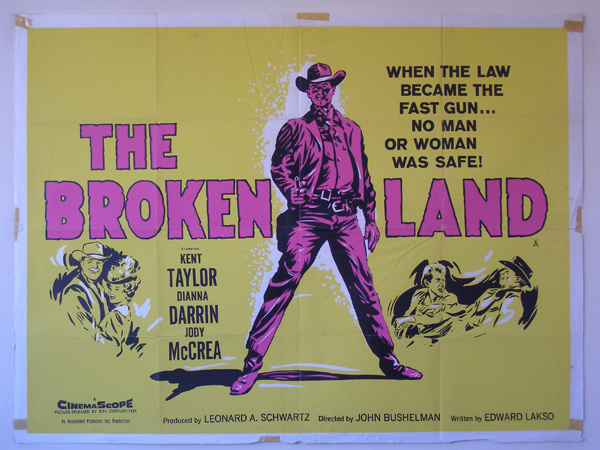 Watchable but not special
The line-up was headed by Kent Taylor, not perhaps the greatest of Western actors but a solid and experienced hand. As a young man he had good looks and a pencil mustache and he was a sort of Clark Gable wannabe. But he hadn’t quite the x-factor and tended to play second lead roles in A-pictures or top the cast in B ones. Westernwise, he went right back to 1933, when he appeared in Paramount’s Henry Hathaway-directed Zane Grey tale with Randolph Scott, Sunset Pass. He topped the bill in another Paramount Zane Greyer, The Mysterious Rider, this time directed by Fred Allen, later the same year. It was a good, if rather ‘B’ start. He was Doc Holliday in Tombstone, The Town Too Tough To Die in 1942 (a movie I’d love to review but which is very hard to find). He was Bob Dalton in The Daltons Ride Again in 1945 but didn’t do another Western for a decade, and then tended to concentrate on TV oaters, notably as Capt. Jim Flagg in The Rough Riders. The Broken Land was a fin-de-carrière Western for Kent, his last as lead, there being only a small part as an attorney in the Dale Robertson picture Law of the Lawless in 1964 to come. He plays the corrupt and sadistic marshal of an Arizona town and he handles the thuggishness quite well. 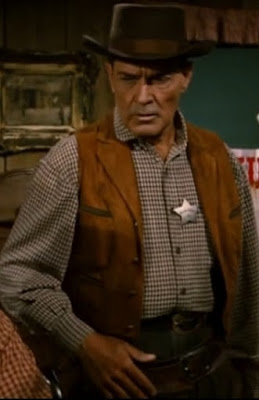 Kent nearin' the end of the trail
Also in the cast we have Jody McCrea, Joel scion and just as tall and strapping, as a decent deputy Ed Flynn and a young but already charismatic Jack Nicholson as Will Brocius (probably a relative of Curly Bill’s), a prisoner who breaks out (by slugging Jody) and goes on the run from the brutal lawman with other young fugitives. Jody had started as Gunman (uncredited) in his dad’s Wichita in 1955, when he was 20-odd, and had first led in a Western in a TV movie, Johnny Moccasin, the following year. He often appeared with pater, notably co-starring in the TV version of Wichita, Wichita Town. 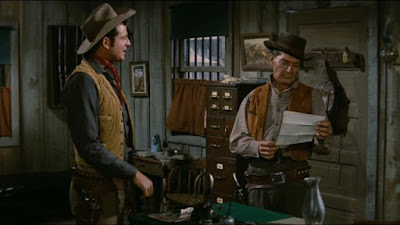 Kent ignores his decent deputy Jody
Nicholson had done some TV Westerns but this was his first feature oater. He would get noticed in those two cult Monte Hellman pictures in 1966, The Shooting and Ride in the Whirlwind, and in the 70s do The Missouri Breaks with Marlon Brando and lead in Goin’ South, the latter which he directed but neither a good Western. 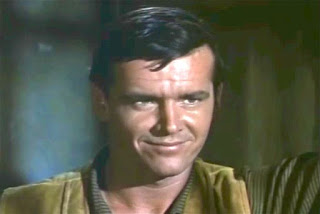 Jack already one of the stronger actors
The others who go on the run with Brocius are second-billed Diana Darrin, as unwilling waitress Mavera, and Robert Sampson as drifter Dave Dunson (probably not a relative of the Red River Thomas Dunson). This was Ms. Darrin’s biggest Western role (she didn’t really do the genre as a general thing) and Mr. Sampson got work on a number of Western TV shows but also only did a handful of big-screen oaters, with small parts. I’m afraid neither Darrin nor Sampson stand out in The Broken Land at all. With them is a simple-minded youth Billy (Gary Sneed), charitably given work in the general store, and this was Mr. Sneed’s only credit as an actor. He’s actually quite good. 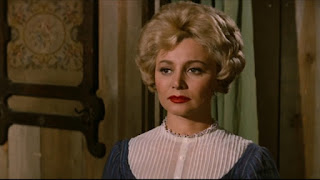 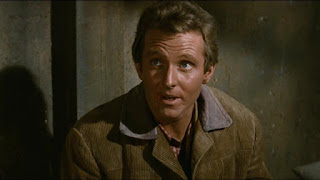 ...and Robert,
neither very charismatic, I fear.
The four are chased by the marshal’s posse, eventually this posse turns on the swinish peace officer and all’s well that ends well for the survivors (to know who those are you will have to watch the movie).


Frankly, it’s pretty average stuff. The director was John A Bushelman, one of only five movies he helmed and his only Western.


You could watch it. But don’t expect too much.