You wouldn’t necessarily expect Hallmark and TNT to produce King Lear for TV. But in 2002 they did just that, setting the tale in post-Alamo/San Jacinto Texas and casting Patrick Stewart as ranch patriarch John Lear. Sir Patrick, when not commanding the Enterprise or managing the X-Men, has of course distinguished himself on the Shakespearean stage, though I am not sure he has ever been Lear in Stratford or London. He goes the whole hog in this movie, though, with a very un-Picardian white mane and other Old-Testament-prophet attributes too. 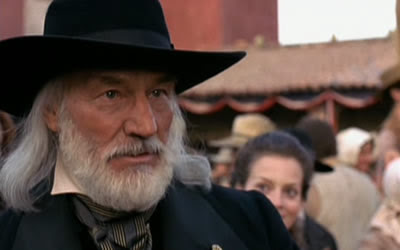 Stewart's Lear goes for a Willie Nelson/OT prophet look
Stewart’s Lear, however, rather pathetically feels victimized and he is pretty vigorous rather than the senile and doddery figure we are used to. He’s a Texas rancher who has built an empire, a figure we are well used to in Westerns. In oaters such men usually have weak and immoral sons, of course, and sometimes a decent, strong son-like figure who really ought to inherit – and sometimes does. Lear has not had the foresight to produce a son who survives so is saddled with his ghastly daughters. 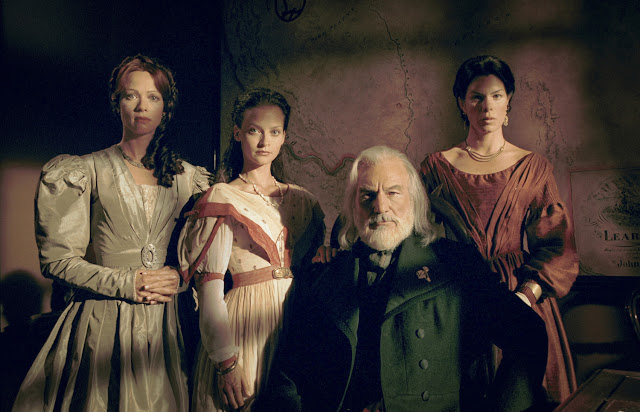 How sharper than a serpent's tooth it is To have a thankless child
The director, Uli Edel, known for TV movies such as Tyson and Rasputin, and his writer, Texas historian Stephen Harrigan (Murder on the Orient Express, Take Me Home: The John Denver Story, etc.) took considerable liberties with the Bard’s play but that’s OK. Actually, both had some track record in the Western arena, Mr. Edel having directed Purgatory and Mr. Harrigan having written The Colt, both of which have considerable merit.


Foolish, petulant and egocentric though Lear is, we can’t help feeling he didn’t deserve his appalling daughters, and Marcia Gay Harden, especially, and Lauren Holly give us really foul women with great skill, I thought, as Susannah (Goneril) and Rebecca (Regan). The Cordelia figure, Claudia Lear, played by Julie Cox, has a lower profile and comes across as a straight goody. In the end she is not hanged but falls victim in the battle to her father’s stupidity and disobedience. 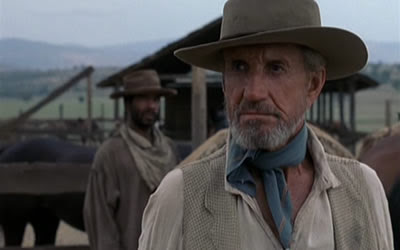 Scheider excellent
The Gloucester figure is neighboring rancher Westover, played by the admirable Roy Scheider (what a pity he didn’t do Westerns) and it is Susannah who blinds him. There’s no king of France, of course, but instead there is Mexican landowner Menchaca (Steven Bauer). Lear has promised his friend Sam Houston that he will not attack Menchaca’s enclave but his ne’er-do-well family have other ideas, prompting invasion and the climactic battle in which Claudia is shot and Lear dies, finally, of grief, we are to suppose.


The king’s fool is rather good; he is the slave Rip (David Alan Grier) who, like all good fools, speaks wisdom, and truth unto power. Grier is known as a comic actor but there’s nothing comic about this fool. 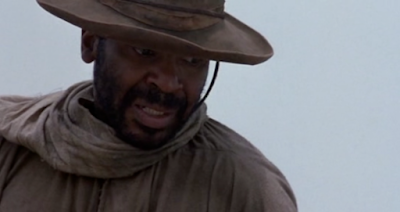 Grier is the Fool
Visually, the movie is fine with Durango locations standing in for Texas photographed by Paul Elliott and Guillermo Rosas. It’s a good widescreen DVD with high quality picture.


Not the first adaptation or re-setting of Lear for the screen (one thinks of Kurosawa’s 1985 Ran and the 1997 A Thousand Acres), this one is certainly worth a look. Whether it is a Western is open to debate.