In 1939 Warners joined the rest of the big studios in turning out a big-budget Western for grown-ups. Fox started it with their big star Tyrone Power as Jesse James, Paramount had Joel McCrea in Union Pacific, Universal put James Stewart in Destry Rides Again and in April ’39 Errol Flynn strapped on a gunbelt (rather unwillingly) in the Michael Curtiz-directed Dodge City. Of course it was also the year of John Ford’s Stagecoach. Suddenly Westerns were big news again - and big Hollywood stars were mounting up. The likes of Power, Flynn and Stewart (whose classic Anthony Mann Westerns were still a decade in the future) were not natural denizens of the saddle or Stetson wearers. But the movies were big hits and the theater-goers’ dollars came rolling in. In the last scene of Dodge City Warners set up the inevitable sequel by having Flynn and Olivia de Havilland leave Dodge in a wagon heading for Virginia City. 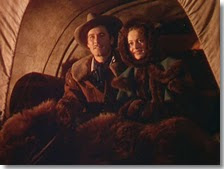 In the last reel of Dodge City, Errol & Olivia set off for Virginia City
But somewhere along the trail between Dodge City and Virginia City de Havilland seems to have got lost. By the time the sequel came out in March 1940 Miriam Hopkins had replaced her as Errol’s true love. Olivia would be back in the Curtiz/Flynn Western Santa Fe Trail (with Ronald Reagan as Custer) in December 1940, and the following year, of course, she would be Custer's wife Libby to Flynn’s own dashing general in Raoul Walsh’s rollicking They Died With Their Boots On. But audiences would be disappointed if they were looking for the Flynn/de Havilland magic in Virginia City. 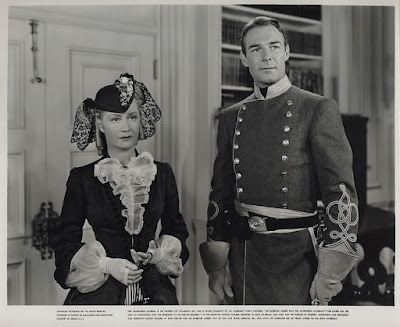 Hopkins replaced de Havilland. She hovers between two captains, Randy, in this shot, and Errol. But they are on opposite sides...
Not that la Hopkins was bad. She was a posh Southerner and well cast as the glam Confederate spy (although less convincing as singer in a rowdy Nevada saloon). After a successful career on Broadway she had signed for Paramount in 1930 and she had some smash hits. But she failed to get the part of Scarlett O’Hara and by the end of the decade the decent parts that had been flowing in had slowed to a trickle. She only made two movies in 1940 and would soon return to Broadway. She had no track (or trail) record in oaters, having only done the semi-Western Barbary Coast in 1935. (She would return as The Duchess in The Outcasts of Poker Flat remake in ’52). 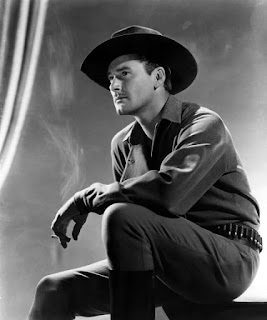 Though he preferred buckling swashes, he was also good with a six-gun
Flynn himself, though he may have been doubtful about the genre, was excellent in Westerns of the period. He had all the dash you could want and his Australian/English accent didn’t seem to matter at all. He cleaned up Dodge with aplomb in ’39 and we have few doubts that he will win the war for the Union in Virginia City. That's right, it’s a Civil War-out-West story, set in 1864. Captain Bradford, with his trusty lieutenants Swenson and Marblehead (Alan Hale and Guinn ‘Big Boy’ Williams, Curtiz regulars) make repeated efforts to break out of Libby military prison, ‘The Devil’s Warehouse’, but are foiled by the clever commandant, Capt. Vance Irby, played by an also well-cast Randolph Scott. 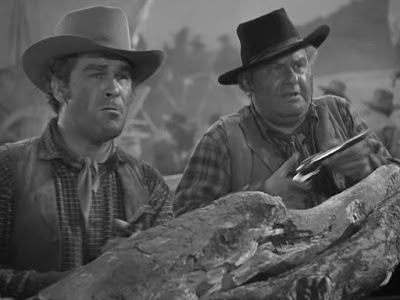 His two sidekicks are Big Boy Williams and Alan Hale
Scott seemed destined to star only in B-Westerns and to play second fiddle in A-ones. The year before he had backed up Tyrone Power in Jesse James and soon after Virginia City he would do the same to John Wayne in The Spoilers. The Western he had led in the year before Virginia City, Frontier Marshal, was very much Fox’s minor Western, with none of the bally-hoo Jesse James received – though in fact it was a big hit at the box-office, the Fox moguls notwithstanding. But Scott was a modest and generous man and never hogged the limelight; he had no problem standing back to let ‘bigger’ stars take center stage. He is very good in Virginia City, at least the equal of Flynn, and gets about the same screen time. 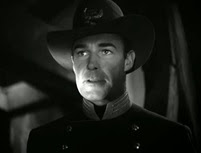 Noble Confederate captain. Nice lighting.
The picture was in black & white and after the big, bright Technicolor Dodge City it might have been a disappointment to viewers. But DP Sol Polito (who did both) was a real talent and I think Virginia City is, visually, just as good as its predecessor. Polito had started out as a professional still-photographer and as cinematographer had done some fine Western work on Harry Carey oaters in the 1920s before becoming a Warners stalwart in the 30s. His color shooting on the Curtiz/Flynn The Adventures of Robin Hood in 1938 is still hailed as one of the best ever uses of Technicolor. The picture quality on my DVD of Virginia City was really excellent (though it had annoying subtitles you can’t turn off). 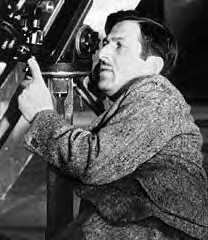 Sol Polito
Actually, the reviews of Virginia City at the time were pretty damning. Frank Nugent (himself a Western writer of some note) in The New York Times called it “depressingly pat” and wrote that “Mr. Flynn is about as mobile as a floor walker; Miss Hopkins recites her stilted lines by rote.” Others called it “ultra-conventional” and slow. In his fine guide Western Films, Brian Garfield called it “a hackneyed over-budgeted B-oater”. It has certainly been overshadowed by Dodge City. Myself, although I don’t think Curtiz ever really ‘got’ Westerns, I esteem Virginia City the best of the three he did with Flynn. 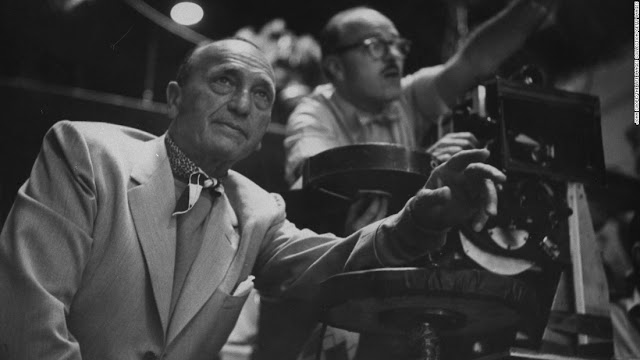 Michael Curtiz
There are typical Curtiz touches, such as the big crowd scenes or the patriotic singing (a feature of Curtiz’s most famous picture, Casablanca, as well as Dodge City). And there’s certainly plenty of action as Capt. Scott in Nevada organizes a shipment to Richmond of five million in gold ingots hidden in a wagon train of ‘settlers’, and Capt. Flynn does everything possible to thwart him. Thrown into the mix is the guerrilla leader Murrell and his band of killers. They want the gold too. Curtiz on the set of Virginia City with Polito (center) and Scott
Unfortunately, though, Murrell is played by Humphrey Bogart, in a laughably bad performance. It is difficult to judge which is sillier, his mustache or his ‘Spanish’ accent. Bogie would be supremely good in Casablanca two years later but in Westerns, of which he did mercifully few, he was completely hopeless. I make an exception for The Treasure of the Sierra Madre, of course, which was absolutely superb, but I mean traditional Westerns, set in 19th century Western states or territories. The only other one he did was The Oklahoma Kid, in 1939, with an equally unsuited James Cagney. 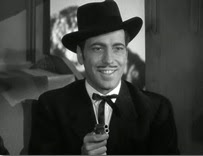 Bogie ridiculous. But he does have a derringer.
Apart from the headline names, we get Ward Bond in a brief part (as in Dodge City), checking on the stagecoach but never seen again, which is a pity; Russell Simpson the Great as a Reb-sympathizing blacksmith; Charles Middleton (aka Ming the Merciless) as Jefferson Davis; Paul Fix as a Murrell henchman; Lane Chandler an orderly in Libby; and Hank Bell, complete with famous mustache, as an uncredited barfly, among others. It is in fact a huge cast, as was often the case with Curtiz.


The opening scenes center on a classic POW camp escape-tunnel (John Sturges must have seen this picture) and much of the later part is equally classic wagon-train movie material. In between we get a big noisy saloon, a fight on top of a stagecoach, great stunts (Yakima Canutt was second unit director) outlaws, and much shootin’ to go with the rootin’ and tootin’. Conventional it may have been but it’s done with great gusto. Not only that, Bogart holds up the other stage passengers with a derringer! What more could you want? Little does Bogie know, though, that Errol has just surreptitiously unloaded it. 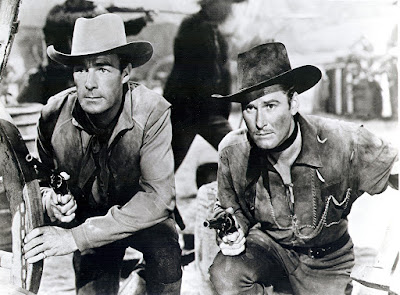 But for the war, they could have been friends. As it is, they are respectful enemies.
It’s supposed to be a true story, though the intro tells us that “Only the characters are fictional. The story is true.” In other words, it’s hogwash. For one thing, they have 1870s Colts. Never mind, we aren’t watching a documentary.


At one point the Flynn character says he learned his soldiering skills in Afghanistan, and that was true: Errol spent the 30s cavorting with Olivia on the British Empire’s far frontier in the likes of The Charge of the Light Brigade. In fact the whole A-Western genre migrated there in that decade. It only really came back West of the Mississippi in the 40s. 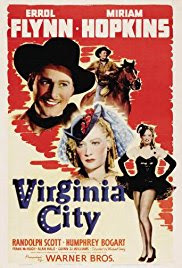 Worth a look
At another point it falls to a girl to call someone “You dirty rat”, which must have made the Bogart-Cagney clan annoyed at their line being stolen.

Of course a decade or so later Randy would be back in Virginia City, laying down a railroad from Carson City. But that's another story.


At the end of the picture Errol gets court-martialed and sentenced to death for being frightfully decent towards the brave Rebs but at the last mo’ he is pardoned by a saintly and silhouetted President Abe Lincoln (Victor Kilian), a sort of counterpart to Ming the Merciless’s President Jeff Davis at the start of the movie. And he gets the gal, natch. History does not relate if Olivia was jealous. 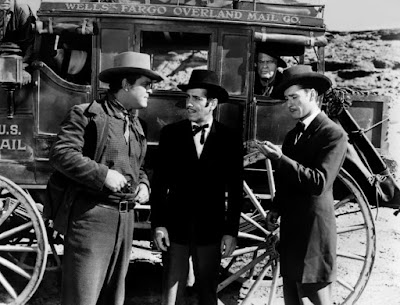 I bet Bogart regretted taking the part
Robert Nott, in his entertaining book The Films of Randolph Scott, tells us that when the film premiered in Virginia City, Nevada, in 1940, the townspeople were charged an exorbitant admission fee (for those days) of $1.10 per customer. This was owing to the fact that Errol Flynn, Miriam Hopkins, and others from the cast had been scheduled to make a personal appearance on stage after movie's showing. However, when Flynn and the others failed to appear, enraged audience members stormed out of the theatre and took the Warner Brothers entourage (including 5 busloads of studio personnel) hostage, demanding they get their money back. Eventually, the theatre's manager agreed to make up the difference by refunding the audience 70 cents apiece, thus reducing admission to its usual 40-cent fee.


You have to like Errol Flynn Westerns, really. They aren’t the greatest examples of the genre but they are hugely energetic and fun. And this one has Randolph Scott in it – and a derringer. Ergo, it’s a must-see.