Durango sets up the series 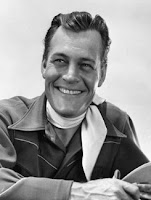 Charles Starrett (left) took over from Tim McCoy as Columbia’s chief B-Western star in 1935, and made a whole series of oaters for the rest of the decade (some of which we’ll look at another day). But in 1940 he made The Durango Kid, which was to be the first in a very long series, lasting for seven or eight pictures a year right up until The Kid from Broken Gun in 1952, which we reviewed recently. In a way, though, The Return of the Durango Kid, which followed The Durango Kid after a five-year wartime pause, was the movie that launched the series. It established the norms, as it were, and had little in plot terms to do with the first one. In it the good guy occasionally dons a Zorroesque black costume and mysteriously appears in town to Right Wrongs.


Most of the later Durango Kid pictures would be directed by Ray Nazarro or Fred F Sears but The Return and the ten subsequent Durango movies were directed by Derwin Abrahams, who had been assistant director on numerous Hopalong Cassidy Westerns in the late 30s before himself graduating to directing Hopalong (and the odd Bob Steele oater) in the early 40s. He would later be a regular TV director of Hopalong Cassidy and Cisco Kid episodes.


Starrett was no singing cowboy and the obligatory songs were provided by a five-piece outfit called The Jesters (no relation to the 50s doo-wop or 60s garage bands). I must say their songs are a lot of fun. We also get some crooning in the very first scene as Durango’s pal Jim (Tex Harding) sings a song about a pinto and his cowboy pal. It’s a lovely voice, though sadly it was not Tex’s own but dubbed, the real baritone belonging to James "Bud" Nelson, as his son or daughter relates on the IMDb web page for this movie. Never mind, it’s a nice song. 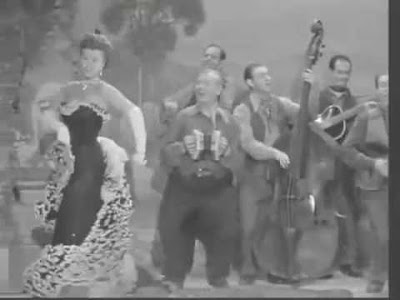 Saloon gal Paradise dances to the musical accompaniment of The Jesters
Although most of the future conventions are laid down in the film, there are some that are not quite yet established. For example, Durango’s alter ego, the ‘Clark Kent’ version as it were, is Bill Blayden. In later pictures he would be Steve Something – the surname varied but he was always Steve. And he only rides Raider: later on, Steve’s mount would be the paint Bullet while Raider was reserved for Durango. Furthermore, in this one Bill seems quite relaxed about revealing Durango’s true identity. Later on, not even his comic sidekick Smiley Burnette would be aware of Steve’s double life. 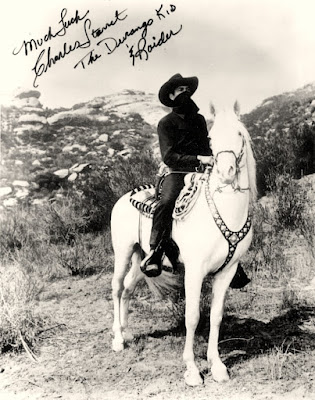 Durango on Raider
There’s no Jock Mahoney to do the stunts yet but Ted Mapes is on hand (and to be a henchman). Mischa Bakaleinikoff trotted out the music, as he would de regularly to accompany Durango’s derring-do. Veteran Hopalong writer J Benton Cheney, who had also scribbled down Starrett Westerns since 1937, tapped out the screenplay. 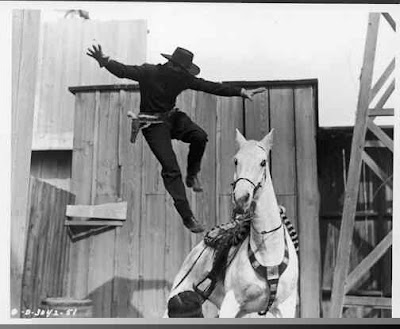 Good stunts
Bill has no sidekick yet, only a pal, Jim – Tex Harding, the musical shotgun messenger, as I said. Poor old Tex’s career kinda faded away and he ended up as a meat cutter in a supermarket in Spokane County, Washington State, but he is personable enough as the hero’s friend. He would return playing a character named Tex Harding in the next half-dozen Durango oaters – once even the Reverend Tex Harding. The comic angle, though, is provided by old-timer stage driver Curly (Britt Wood, curiously uncredited for such a big part).


We’re in Silver City, Texas, 1875. It’s a skullduggery Western, obviously – they all were. The chief villain, Lee Kirby, owner of the saloon The Crystal Palace, is played by John Calvert, who parallel to his movie-acting career was also the world's oldest performing magician. On stage from the age of eight, he fulfilled a lifelong ambition when he appeared at the London Palladium on his 100th birthday. Not bad, huh. He didn’t die till 2013, aged 102. He’s very good as the slimy and murderous bad guy, especially because he has a derringer, which he draws no fewer than nine times in the course of the movie. Being besotted by derringers, I was in seventh heaven. 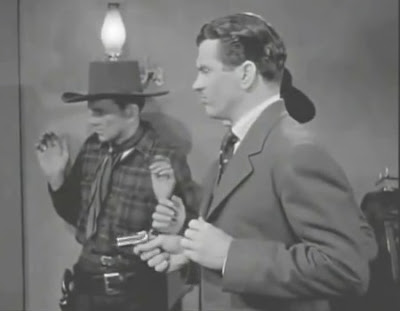 Bad guy Kirby thinks a derringer will do against Durango - as if.
The love interest is provided by his saloon gal, Paradise (Jean Stevens, who would return in Frontier Outlaw, another Durango outing the following year). She is in cahoots with Kirby and his henchmen-stage robbers but, as was right and proper, had a heart of gold and develops a bit of a soft spot for Bill.


I liked too the widowed stage-line owner, Buckskin (Betty Roadman, also disgracefully uncredited) who has a Jane Darwell vibe to her. She’s a tough cookie who stands up to Kirby and his thugs (with the help of Bill and the Jesters, of course).


At the end, having shot Kirby (“I’m not wearing a gun,” he pleads, but we know he has that sneaky derringer) Bill/Durango leaves town because some outlaws are on the rampage and “there’s more work for Durango”. So he sets up the rest of the series nicely, to the lasting joy of many (chiefly youthful) viewers who would flock to the movie theaters to follow his escapades – until TV came along and Durango would be seen no more. Sic transit gloria mundi.