Westerns liked states (or territories) for titles. California, Arizona, Nevada, Texas, and so on. And in fact Sam Peckinpah’s The Deadly Companions in 1961 had New Mexico as an alternative title (obviously, as it was set in Arizona). The 1951 New Mexico is not a bad member of the league, though like many of these pictures it could have been set anywhere in the generic Southwest in the 1860s, 70s, or 80s.


It’s a cavalry/Indians B-Western but it was no zero-budget program-filler. Shot in Ansocolor (though sadly seen nowadays on DVD and on TV in black & white) in glam New Mexico locations, and weighing in at 76 minutes, it also had a strong cast. 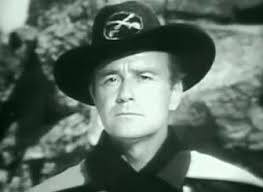 Unusually, it starred Lew Ayres (left). Greta Garbo’s leading man in The Kiss in 1929, Paul Baumer in All Quiet on the Western Front (another kind of Western, that) the year after, then Dr. Kildare from ’38 on, Oscar-nominated for Johnny Belinda in ’48, he was quite a star, but he didn’t do Westerns as a rule. He did some TV oaters later on, notably Frontier Justice, but New Mexico was his first and last big-screen Western. He isn’t bad, actually, as the principled and rather pro-Indian Army Captain Hunt battling obnoxious and stupid superiors to try to bring peace to the territory. 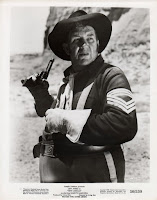 He is backed up by some good Western character actors: we have Andy Devine (right) as a slightly comic sergeant, only huge in 1951 and not yet gargantuan. Jeff Corey is rather good (as far as the limited script allows) as the Indian Army scout Coyote, who dies heroically. Raymond Burr is the racist bully Private Anderson (pre-Perry Mason Ray had quite a line in Western heavies) who shoots dead the young son of Chief Acoma, and Acoma himself is played by none other than our old favorite Ted de Corsia, who was often an Indian when he couldn’t be a thuggish gunman. Ian MacDonald and Jack Kelly are other troopers. It’s not a bad line-up. 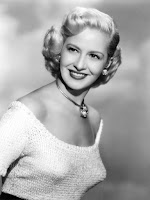 The leading lady (for of course no matter how unlikely that a professional singer would be with the soldiers as they are besieged by savage Indians on a New Mexico mesa short of bullets and water, there had to be a glamorous blonde up there to entertain the troops with songs) was Marilyn Maxwell (left). A Monroe wannabe, Ms. Maxwell is described in the IMDb bio thus: “Tall and blonde with good looks and a pleasant singing voice, she scampered through a bunch of breezy, forgettable film roles.” She preferred light comedies to Westerns; this was the first of only three she did.  She has to play one of those really annoying dames who ignore warnings of danger, get it into life-threatening situations because of their stupidity and then have to be rescued by the very fellow who told her to stay away from Indian territory.


The picture was directed by Irving Reis, who had worked for RKO and Fox but whose only Western this was. It was produced by Irving Allen – this and a Brian Donlevy B-Western the same year were his only oaters. Considering all these non-specialists, the movie turned out quite well – probably because of Devine & Co. 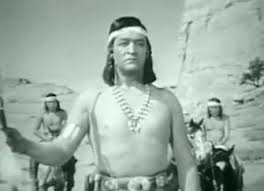 Ted is Chief Acoma
It opens with a very saintly and noble Abraham Lincoln (Hans Conried) who has come out to New Mexico to make peace with Chief Acoma. You didn’t know Abe went out West between the end of the war and his assassination? Well, he did. He must have. It shows it in the movie. The bearded and stove-pipe-hatted president often appears in Westerns but usually back in DC planning to unite the nation by building a trans-continental railroad or something. He isn’t often seen getting out of a stagecoach in the dusty West to talk to Apache chiefs. In this picture he is assassinated with an 1870s .45, not Booth’s nasty little derringer. 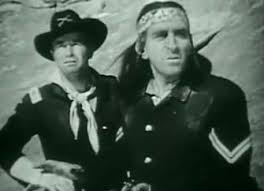 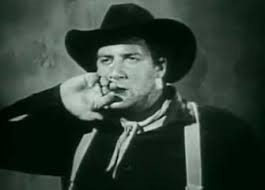 Jeff and Ray are in the platoon too
Once he is out of the picture (in all senses) his successors oppress the Indians. Stupid martinet Col. McComb (Walter Greaza) and corrupt & cowardly Commissioner Wilcox (Lloyd Corrigan) blunderingly destroy Abe’s carefully-made peace and steal Indian land, and rather understandably Acoma and his thousand braves go on the warpath. That’s the plot. Nothing very original but reasonably well handled, and you’ll probably quite enjoy it if you give it a go. 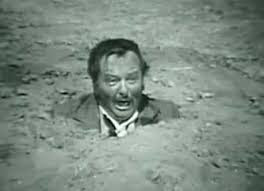