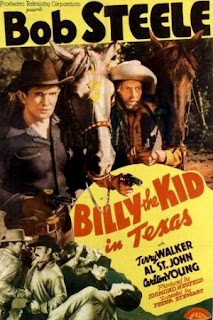 
These Billies were of course goodies, falsely accused of the crimes laid at the Kid’s door. I was saying in the review of Gun Justice that he even became a lawman once, though that was in Sheriff of Sage Valley when Buster Crabbe had taken over the role. Well, it was evidently something of a habit, because in Texas too Bob’s Billy is made sheriff by the townsfolk, and faithful Fuzzy (Al St. John) proudly gets to wear a deputy’s star.


Audie Murphy would start his Western career as Billy, in The Kid from Texas, when, probably because of Audie’s Texas roots, they decided that William Bonney was a Texan. He wasn’t, but he did go to Texas and was in the Panhandle from time to time, rustling stock or carefully avoiding detection. So Billy the Kid in Texas does have some plausibility.


In the story he arrives in Corral, TX, where, obviously, bad guys have treed the sheriffless town. They are cowhands from the Lazy 8 but these aren’t simple cowboys hurrahing the place (though they do that too) but crooks and thugs who hold up the express company’s deliveries. 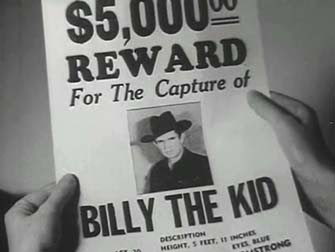 He's may appear a baddy in black but actually he's just ridin' the West doin' Good
It all starts with a robbery, which Billy foils, and much galloping and shooting - one of those chases where they fire six-shooters with abandon on horseback, hitting nothing of course, and the revolvers have at least twenty shots in them before needing reloading. Anyway, ‘Billy Clark’, as he calls himself, recovers the stolen money and proves himself adept with a firearm so is the ideal candidate to wear the sheriff’s star. No one knows (yet) that he is Billy Bonney, you see. 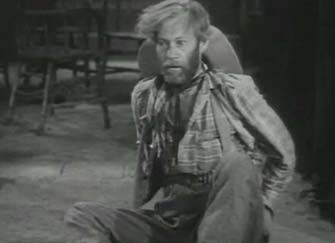 Al amuses the juvenile audience
Now in Gun Justice, Carleton Young would be his other sidekick, Jeff, but this time Carleton (misspelled as Carlton in the credits) is Billy’s brother, Gil. He has allied himself with the bad guys and is tasked with shooting down the new Sheriff Clark. At the last mo’ he recognizes his bro, and they fudge the showdown and hatch up a plot together to foil the baddies. 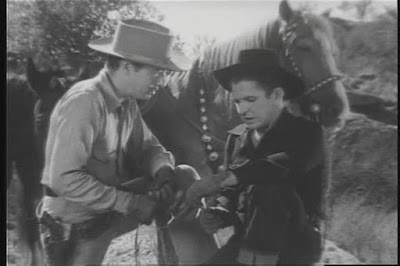 Carleton and Bob, brothers
It’s all predictable (note, I did not say corny) and formulaic. Director (Sam Newfield this time) and writer Joseph O’Donnell go through the motions and tick all the boxes (on a very limited Poverty Row budget). There’s a saloon where fisticuffs can take place, as was compulsory in them days. Naturally there’s a fair maid in town, Mary (Terry Walker), and some comic antics from Fuzzy. Slim Whitaker is the driver. Billy is dressed all in black and rides a fancy palomino. Maybe he’s trying to be Randolph Scott. 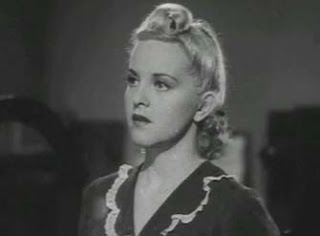 The fair maid
It’s all enjoyable fun, even if history teachers would be well advised to stay away, to avoid having palpitations. 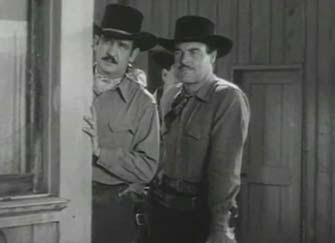 Obviously bad guys. You can tell from the mustaches.