Roy's up in Deadwood now 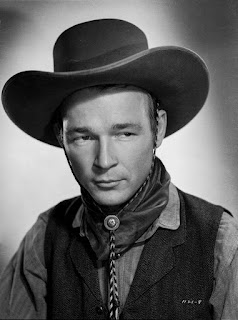 I kinda prefer early Roy Rogers Westerns, before Trigger got so darned intelligent. Roy had emerged from the Sons of the Pioneers in 1938 to lead in oaters and he’d been Billy the Kid, Buffalo Bill, Wild Bill Hickok and Jesse James by 1941, not a bad achievement. When Sheriff of Tombstone in May ’41 he’d been Brett Starr, and he returned as Brett Starr, though under the assumed name of Bill Brady, up in Deadwood in September. Later on, of course, he abandoned all these characters and played ‘Roy Rogers’.


Notice that the title refers to a ‘bad man’ and not a ‘badman’. Western badmen were semi-goodies, indeed Roy himself, saintly as he was, could sometimes be a badman, that is a fellow who had been on the wrong side of the law but was deep down a goody – witness all those Jesses and Billys and so on. They were usually set back on the path of Righteousness by the redeeming love of a good woman. No, bad men were a different breed altogether – the villains. In this one the title refers to the scheming Deadwood newspaper editor Ted Carver (Henry Brandon, well before he became Scar). Carver comes across as law-abidin’, if rather pusillanimous, and even sets his cap at his glam assistant Linda (Carol Adams) but in reality he is a skunk, the leader of the crooks who have treed the town.


Irrefutable evidence of Carver’s skunkery is given later in the picture when he disposes of two of his co-conspirators (Hal Taliaferro and Jay Novello) who were about to skip town on the first stage with the loot, and he does it with a derringer! Derringers, as you know, are employed by crooked saloon owners, disreputable gamblers and louche saloon women. Actually, later still, in the last reel in fact, Carver, in the rocks outside Deadwood, manages to shoot Roy’s hat off at a thousand yards with the pop-gun, a feat of marksmanship which would have had the editors of the 1880 edition of the Guinness Book of Records reeling with disbelief. 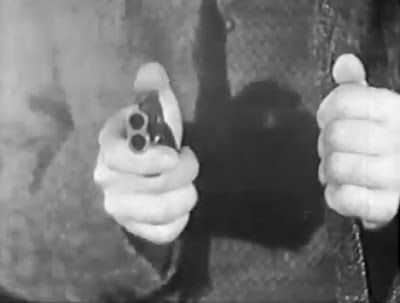 Brett – I mean Bill – first appears in Deadwood with Gabby Hayes’s traveling medicine show. He is the singing crack-shot artist who entertains the crowd (actually, though, Roy hardly sings at all in this picture). Gabby does his usual comic old-timer act, and has some good lines. I liked it when Roy is shot (only a flesh wound, natch) and he whips out a bottle of his elixir. When asked if it works, he replies, “Why, it makes bullet wounds plumb beneficial.” 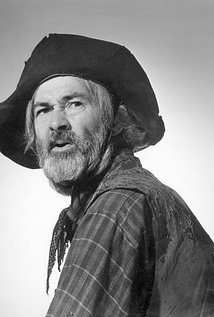 There’s a corrupt sheriff (good old Monte Blue) in the pocket of the crooks, as was traditional. It doesn’t take long to work out that Roy will be wearing that star by the end of the movie, and indeed it ends with him pinning it on (again), so now he has a steady job and can ask for Linda’s hand in marriage (for of course she has seen through her skunkish employer).


Trigger is there, of course, and carries Roy about but the fancy palomino isn’t even named; he’s just Roy’s horse. And he doesn’t do any tricks and isn’t at all (yet) the smartest horse in the movies. He was probably still learning. 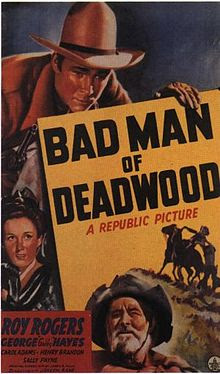 There’s a good armored stage, a sort of prototypical war wagon, which Roy and Gabby rob – not to keep the money, of course, just to get evidence against the evil Carver.
It may be Deadwood but there's no sign of Wild Bill or Jack McCall. 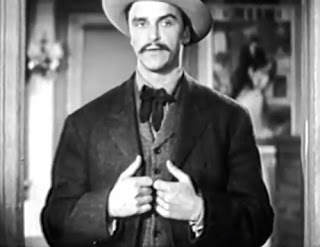 Henry Brandon before he became a Comanche
Still, there’s a lot of gallopin’ and shootin’, and the US Cavalry arrives at the last moment. All good stuff. They weren’t junk, you know, these Republic oaters. They were positively big-budget compared with the Bob Steele/Buster Crabbe PRC Billy the Kid programmers we have been reviewing lately. This one, like so many others, was directed by Republic regular (I nearly said hack) Joseph Kane, also billed as associate producer. Mind, he could have done it in his sleep.


Worth seeing for the derringer.