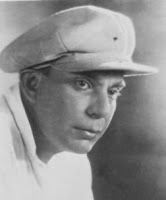 When reviewing The Covered Wagon last year, I wrote of its director James Cruze (left) that “He was no DW Griffith or John Ford. Though one of the highest-paid directors of Hollywood at the time, Cruze made films which were (with exceptions) rather plodding and unimaginative. This is especially true of his big American history pictures such as Old Ironsides and Sutter’s Gold. Cruze seldom moved his camera and cared little for editing. As William K Everson points out in his book A Pictorial History of the Western Film (The Citadel Press, New York, 1969), the US Cavalry’s ride to the rescue is staid and uninspiring. Even the usually foolproof runaway horse sequence is done in one single long shot. And the ‘riders’ on barrels jigging up and down in front of back-projection were embarrassingly bad, even for the time.”


I’m glad now, though, that I put that “with exceptions” proviso in because I have just watched for the first time Cruze’s follow-up Western to The Covered Wagon, namely The Pony Express, also for Paramount. And actually, I think it’s rather good! 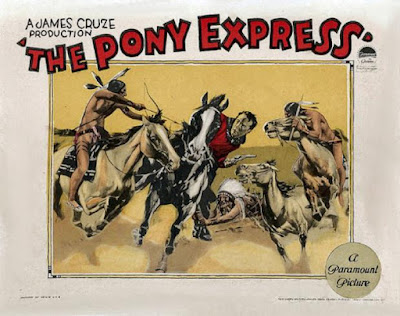 It is certainly ten times better than the very tawdry 1953 picture Pony Express (also Paramount) with Charlton Heston hopeless as Buffalo Bill. That Heston version was, however, vaguely a remake, in the sense that it repeated the (rather silly) California secession plot.


Of course the 1920s and 30s were the heyday of big Manifest Destiny pictures which described the spanning of the continent and the building of a nation.


Another reason I like the 1925 one is that it makes much of the notorious Jack Slade. I was yakking on about Joseph A Slade the other day when reviewing the 1953 Allied Artists picture Jack Slade; I was saying how few celluloid Slades there had been. Well, this one, played by a splendidly villainous George Bancroft, is probably the best we have had. 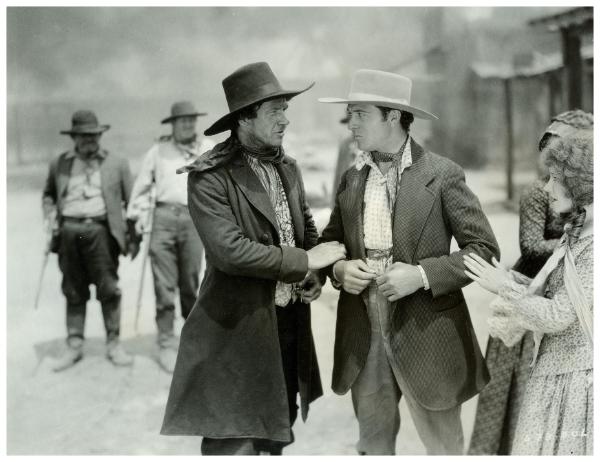 Bancroft excellent as Jack Slade
We open in Sacramento, 1860, with the meeting of a secret society (un)known as The Knights of the Gold Circle. Their bigwig is Senator Glen (Al Hart, already in his eighteenth silent Western). They plan to take California out of the Union, invade Sonora, Mexico and set up a separate republic. To do this they want at all costs to prevent news of Lincoln’s nomination and election getting through to the west coast. So Glen goes to Julesburg, on the proposed new Pony Express route, to recruit Overland superintendent Jack Slade to their nefarious schemes. All very preposterous, I know. 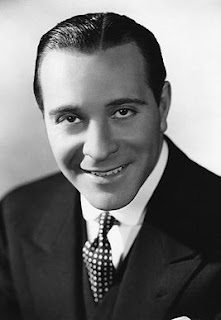 Ricardo Cortez
While these skullduggers are plotting in Sacramento, though, handsome and smiling top-hatted gambler Frisco Jack arrives. He will be the hero of our tale. He is played by Ricardo Cortez, brother of cinematographer Stanley Cortez. Actually, Ricardo was born Jacob Krantz, of Jewish immigrant parents, but in the climate of the times the studio thought a less Jewish and rather more dashing name would go down better, so they chose ‘Ricardo Cortez’. Paramount was grooming him as the next Valentino. He would be Sam Spade in the first Maltese Falcon. He only led twice in Westerns but I think he was very good as the fast-gun gambler determined to foil the dastardly Senator Glen’s cunning plan. 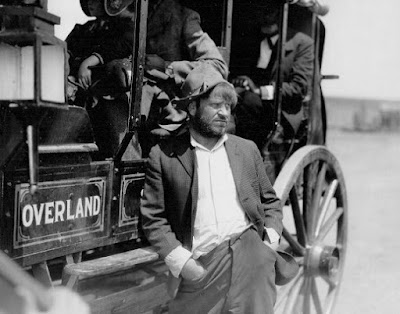 Beery as sidekick
He is greeted by his long-lost pal Rhode Island Red, played by Wallace Beery hamming it up as usual – but of course he could get away with it as a sidekick in a silent movie. He tips Frisco Jack off that the senator is going to have him murdered – he will soon be “decorating a lamp post”. But in a classic move in the saloon, Frisco Jack shoots out the lights (something I’ve wanted to do all my life) and gets away. He follows the senator to Julesburg – no longer in flash clothes – and is just in time to rescue the stagecoach from a hold-up, casually shooting down the bandits and instantly winning the heart of an admiring Molly (top-billed Betty Compson, formerly Roscoe Fatty Arbuckle's leading lady, a famous Paramount contract player, and, coincidentally, I am sure, within a month of the movie’s release to become Mrs. James Cruze). The senator does not recognize his Sacramento opponent and recruits the brave fellow to be a Pony Express rider. 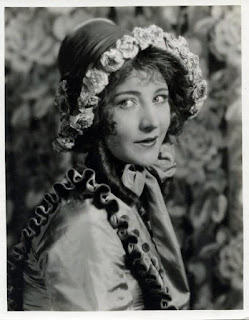 Betty soon to be Mrs. Cruze
This is when we meet Jack Slade, big, burly, dark of mien and clearly a baddy. His hat is splendid. Bancroft carried the part off very well. He’d had reasonably big roles in a couple of Tom Mix Westerns in 1924 and another in ’25. He never topped the bill in an oater but he would of course find Western fame in 1939 up on the box alongside stage driver Andy Devine in John Ford’s Stagecoach. In The Pony Express, not only does he plan to interfere with the US Mail, itself a heinous crime, but he also gets his Indian allies to murder some Oregon Trail settlers and rob them. His half-caste henchman, Charlie Bent (Frank Lackteen) is deputed to whip up the redskins into a frenzy for this purpose. However, he blunders: he doesn’t spot a little girl in a wagon, who survives, and in the last reel the child IDs him. Slade is pitiless: “String ‘im up!” he commands.


Mordaunt Hall, in his review of the time in The New York Times, wrote:


Slade is a big man, who wears topboots, a frock coat, a black, wide-brimmed hat and carries long-barrelled pistols. Unlike the ordinary villain, Slade smiles. It is not an ingratiating smile, but one that forebodes ill. Yet when he is on the warpath for a man who wants to pump him full of lead, his optimistic mouth straightens and his eyes blaze with burning hate. He drinks occasionally, and when the word goes round Julesburg that Slade is drunk the inhabitants eagerly seek cover. The people of Julesburg fear him more than anything on earth, and the reason why is easily understood.


We also meet Mr. Russell of the Overland (William H Turner, stalwart of silent Hoot Gibson and Bob Steele Westerns) who is setting up the equine relay service. And what a pleasure, we also meet Buffalo Bill. Not the stupid Charlton Heston one, who is ridiculously supposed to have started up the express with Wild Bill, but a fourteen-year-old boy (Johnny Fox) desperate to be allowed to ride. 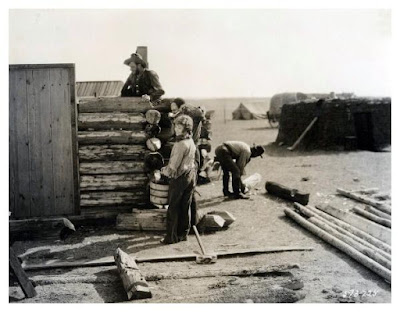 Building the church
There’s a sub-plot about Molly’s dad, Ascension Jones, a preacher, played by Ernest Torrence, Jim Bridger’s old-timer pal in The Covered Wagon. Frisco Jack ‘persuades’ the other gamblers in Julesburg (at gunpoint) to contribute to a church for Mr. Jones. No one (apart from Frisco and Molly) wants to attend, though, until Jack Slade gets drunk and the whole population scuttle into the church for safety.


There’s a climactic Indian attack but bold Frisco Jack rides off and brings back the US Cavalry, in (already in 1925) time-honored fashion. So it all ends well (except for Charlie Bent). Frisco Jack gets news of Lincoln’s election through, Senator Glen is unmasked, California does not secede and Frisco, Molly and the rescued wagon-train girl form a family unit and set off for a new life in California, in the best Western tradition (see Hondo, Yuma, The Tin Star and any number of others). And young Billie Cody takes over from Frisco Jack as rider.


Actually, it even ends well for Jack Slade. He is not unmasked and indeed is promoted by Mr. Russell. As we know, though, it didn’t end well for Jack finally… 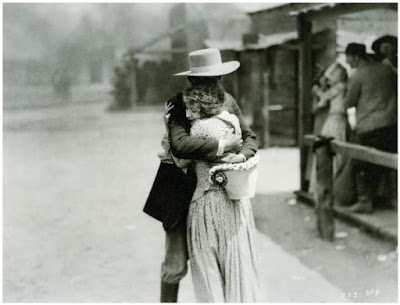 How sweet
Various reviews criticized this picture as stodgy and slow. It isn’t. It is leavened with humor, has plenty of action, and the cast is strong. Mordaunt Hall liked it anyway, and rightly concluded his review by saying, “Motion picture producers come in for their share of blame for unworthy films, end it is only just that they should receive full marks when they make such a sterling story as "The Pony Express." Indeed, Mr. Hall.