The 1950s black & white B-Western didn’t die on January 1st 1960. It went on for some time to come. The Robert E Kent-produced Five Guns to Tombstone, directed by Edward L Cahn, was an example. 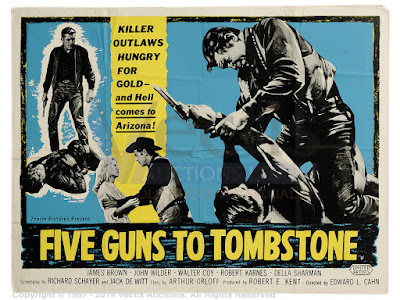 Three Guns for Texas, Four Guns to the Border, Five Guns to Tombstone, it was a popular title. However, it is far from clear who the five guns are in this case, as there are a considerable number involved in the over-complex plot.


The cast was less than stellar. James Brown is Billy Wade, former outlaw going straight. No, not that James Brown. This Brown was an athletic Texan who had smallish roles in war films and had bit parts in big-screen B-Westerns from 1947 on. He was most famous, to stretch the meaning of the word famous, as Lt. Rip Masters on Rin Tin Tin. He led in three of these Kent/Cahn efforts in 1960 and ’61. 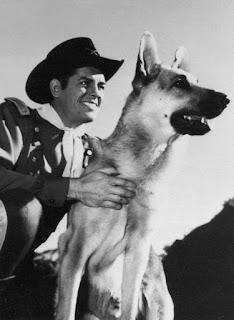 James Brown (left)
His brother Matt (Robert Karnes) is broken out of the territorial prison by crooked saloon owner Landon (Willis Bouchey, good as ever and about the biggest star on the set). Matt is tasked with getting brother Billy to come in on the Wells, Fargo bullion heist he has planned. Billy lives with his impressionable young nephew (Matt’s son) Ted (John Wilder, later writer, producer and director) and they are trying to make a go of their cattle ranch. Billy wants to complete his going-straightness by marrying the glam Arlene (Della Sharman) but that’s a pretty perfunctory part of the plot. 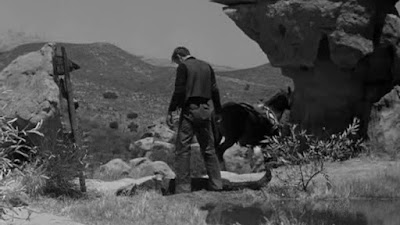 James Brown stands over the corpse of his brother. They were struggling and the gun went off, you know how they do.
I won’t try to explain all the ramifications of the story as that would take all day and not be worth the bother. Suffice to say that it involves much double-crossing and a good deal of triple-crossing as well.


Boyd ‘Red’ Morgan (who also did the stunts) and Gregg Palmer have small parts.


There are relatively few good bits. One is when Landon’s henchman Ike Garvey (Walter Coy) is blackmailing him and Landon pulls a derringer on him, which Garvey looks at mockingly and tosses aside.

The movie’s poster tagline was ‘The Story That Gave Tombstone Its Name’, which it wasn’t.


It’s all done very cheaply and the production values are very reminiscent of the one-hour programmer Westerns of the old days, or a 50s TV Western show. It is supposed to be Tombstone, AZ but the few location exteriors are shot somewhere behind the studios in California. It ends with an unexciting shoot-out in the rocks.


All in all this Western is eminently missable. It was a remake of the much better Gun Belt, a 1953 color George Montgomery Western produced by Edward Small. That one had a much stronger cast and pacier direction, by Ray Nazarro. If I were you, I'd go for that one.