Track of the Cat was a Robert Fellows/John Wayne production under the Batjac label. They got William A Wellman to direct, thus guaranteeing an arty, intense, interesting picture. Wellman went right back to the silent days (he directed three pictures with Buck Jones) and had later done such fine pictures as The Ox-Bow Incident, Yellow Sky and Westward the Women. He was admired by both Howard Hawks and John Ford. Track of the Cat was his most stylized film. 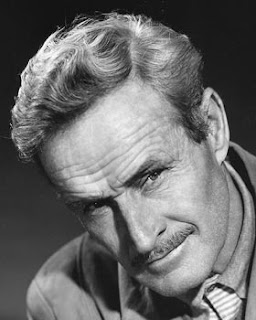 William A Wellman
But to counteract the artiness they got Robert Mitchum, whom Wayne admired, to star. Mitchum was hardly the producer’s friend but even when on auto-pilot (i.e. usually) he was superb, and this time he seemed to spark and was even better. He provided the Western grit to what might otherwise have been an overly talky theatrical piece. Track of the Cat was derived from the novel by Walter van Tilburg Clark, who had written the source novel of Ox-Bow, a picture Mitchum admired (he said he watched it every year). 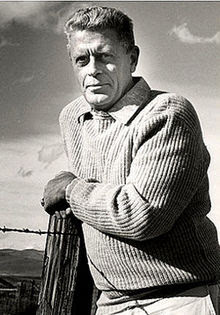 Walter van Tilburg Clark
Talented novelist and screenwriter AI Bezzerides was engaged to adapt the Clark novel into a screenplay. “I finished the first draft of the script. And John Wayne called me in … and said how wonderful it was … I said it was just a first draft. It needs cutting … But Wellman didn’t want it changed. I said, ‘Bill, it needs cutting.’ … Wellman said, ‘No, it’s perfect.’ … And oh my God, that’s going too far. I’m not untouchable. But he wouldn’t listen.”


And indeed the finished film is rather overwrought. It is curiously cloven: on the one hand it is an action Western as men with rifles hunt a ‘painter’, as they call the cat, in the snowy wastes (these parts were shot in the Rainier National Park in Washington and the White Mountains in Arizona). This cat is a symbol of evil or hatred or an ancient curse. Or something. But on the other hand at least half the scenes are staged as interiors or on a sound-stage ‘exterior’ around the ranch, and here we have a family psychodrama, what seems for all the world like a Broadway play by Eugene O’Neill or Tennessee Williams: bitter and hateful people verbally claw at each other.

Gwen wears what little color is allowed
We are somewhere in northern California at the turn of the twentieth century (no exact date is given but a book figures which was inscribed in 1896). A family lives on a remote ranch that risks being snowbound. The parents are a dominant matriarch, a poisonous and manipulative Bible-reading old woman brilliantly played by Beulah Bondi, and a drunken and almost gaga father (Philip Tonge) who has given up all responsibility for anything.

Bondi brillaint as the poisonous old woman
They have three sons and a daughter. Mitchum is the eldest son Curt, supported in everything by his mother and a real swine. Mitchum handles this superbly. Art is more sensitive, a poetry reader and the only one in the family who is kind to the sinister centenarian Indian factotum Joe Sam (played by Carl ‘Alafalfa’ Switzer, the kid from Our Gang, who, amazingly, was only 26) who is abused, even hated by the others.

Tab Hunter plays Harold, much younger, perhaps an afterthought, who has a girlfriend who is staying in the house, Gwen (Diana Lynn, excellent) but who hasn’t the gumption even to kiss her, still less ask for her hand. He is completely cowed. Hunter was never the most charismatic of actors but that was exactly what was needed for this part.

And Teresa Wright, with whom Mitchum had acted in another dark Warners Western, Pursued, in 1947, is also very good as the disappointed spinster sister who loves Art but hates her mother. That’s it. It’s a small ensemble cast (which gets smaller when early on Art is killed by the cat) and as they are all (except Harold) articulate and passionate you can see it would have been ideal as a stage play in the theater.

Curt and Art
The Roy Webb music is cleverly symphonic, matching the different scenes, so by turns, dark, cold, raging.


The picture is fascinating visually. Wellman and Batjac had to extort widescreen color and expensive locations from Warners. Jack Warner was, however, furious when he found it had been used to produce a black & white picture: Wellman had all the characters wear black and white.

The scenery and props are monochrome too. Only Gwen, as an outsider, is allowed a flash of yellow under the black, and Mitchum has a blood-red mackinaw that stands out incredibly in the snow scenes. This jacket, however, figures in the plot and Mitchum’s character early trades it for Art’s black & white cowskin one, which he wears for the rest of the movie.

Even when they are laying out Art’s body, the mother says, “Wrap him in that black and white spread. He always loved it.” The coffin is painted black, as is the cross. DP William Clothier managed to attenuate the tints generally and saturate the rare flashes of color. Art director Al Ybarra also did a wonderful job and Clothier, Ybarra and Wellman were delighted with the result. The color-coding is as noticeable as it is in Nicholas Ray’s Johnny Guitar, photographed by Harry Stradling Sr, which Republic had brought out six months before. Jack Warner said, “I’m spending five hundred thousand dollars more for color and there’s no color in the damn thing!” Wellman replied tersely, “If he doesn’t like it he can go shit in his hat.”

Splash of color
Andrew McLaglen, the assistant director, had to manage the snow scenes. On July 4th up on Mt Rainier they had a blizzard. After the storm it was perfect. Many of the long shots of ‘Mitchum’ are his stunt double, easily disguised in that hooded mackinaw, Mitch himself doing the close-up sound stage ones. But Mitchum did enough outside himself for him to say it was the toughest shoot he ever did.

Brrr
Equally cold is Mitchum’s character Curt, “a cheap, dirtymouth bully”, the most unsympathetic role the actor had yet attempted. Bezzerides, on the set, later said, “Bob Mitchum was fantastic. He carried scenes that need to be polished [Bezzerides was still vainly hoping for rewrites] and his performance made some of it work. I got to know him very well and I thought he was a wonderful guy. But cynical, God is he cynical.”

Holed up in a cave
One problem is that Mitchum is alone, mostly, so the only way he can communicate his thoughts (easily done in the book) is to talk to his horse, or, once he has sent the nag home with his brother’s body, himself. The sight of Robert Mitchum wading through think snow or holed up in a cave muttering to himself is odd.

The ranch
The panther attacks are well handled. We never see the cat (it’s supposed to be an abstraction of evil, I suppose) and this works, just as those Westerns with threatening Indians that are never seen work. But the audience didn’t warm to the picture. Perhaps they wanted to see Mitchum torn to pieces by the cat at the end. ”The audience’s imagination failed to imagine,” said Wellman. It was a box-office flop and also panned by the critics, some of whom were more savage than the black panther. 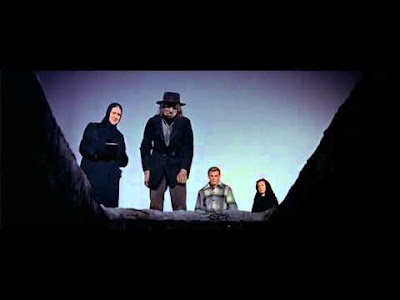 Arty camera in the grave
It’s a very fine film, though, in my opinion anyway.