Paramount were still releasing 1950s B-Westerns in 1965. Town Tamer could easily have been made ten years before, and with the same cast. In fact its cast is the best thing about it: it’s a veritable Burke’s Peerage of Western character actors. 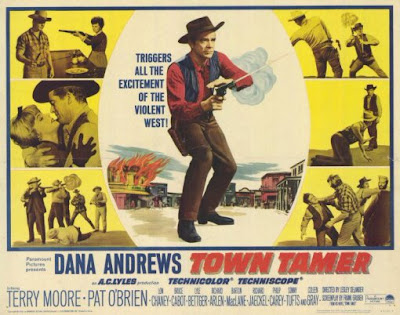 Classic stuff
Producer AC Lyles (born 1918) was asked by Paramount to do a Western when they realized they had none on their schedule of releases. They asked him how many he could do a year and he replied "five". He was given the green light to produce more second features for the studio. He filled his cast with many older, experienced actors who were his friends.


Writer Frank Gruber (1904 - 69) churned out Western stories, novels and original screenplays for decades. He was responsible for The Kansan in 1943 and White Comanche in 1969 and 208 others in between. It was he who said that there are only seven Western plots. If you are interested, they are:


1.       Union Pacific story. The plot concerns construction of a railroad, a telegraph line, or some other type of modern technology or transportation. Wagon train stories fall into this category.


2.       Ranch story. The plot concerns threats to the ranch from rustlers or large landowners attempting to force out the proper owners.


3.       Empire story. The plot involves building a ranch empire or an oil empire from scratch, a classic rags-to-riches plot.


4.       Revenge story. The plot often involves an elaborate chase and pursuit by a wronged individual, but it may also include elements of the classic mystery story.


5.       Cavalry and Indian story. The plot revolves around "taming" the wilderness for white settlers.


7.       Marshal story. The lawman and his challenges drive the plot.


Director Lesley Selander (1900 – 79) was one of the most prolific directors of feature Westerns in cinema history, having taken the helm of 107 Westerns between his first feature in 1936 and his last in 1967. He was a real pro, reliable and skillful, who brought in his pictures on time and on budget.

Lyles, Selander, Gruber
Dana Andrews topped the billing, looking a bit long in the tooth (there’s a scene when he looks at the teeth of a horse he is thinking of buying and I wondered if the producer and director did that to him). In the script it is said that he is forty; actually he was in his late fifties and does rather look it. But heck, who am I to talk? He does his quiet, solid, brave act, a bit like Joel McCrea I think. 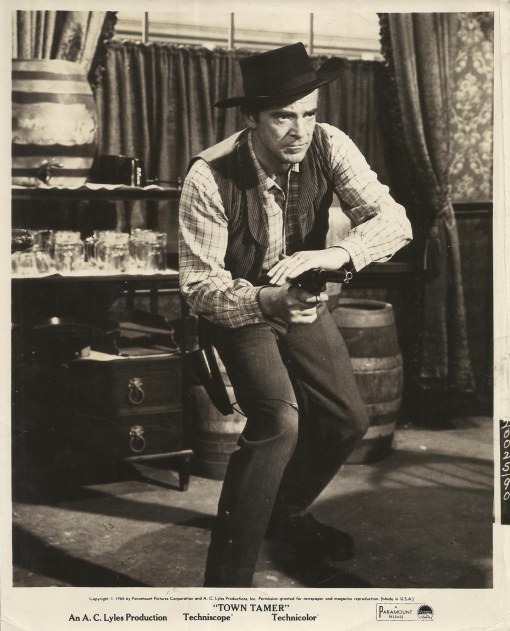 Dana cleans up the town
Chief villain is good old Bruce Cabot as the crooked saloon owner Riley Condor. After rescuing Fay Wray from King Kong he was Magua in the 1936 Last of the Mohicans, did several of the Errol Flynn Westerns, was screen-tested for John Wayne’s part in Stagecoach, became Duke’s drinking buddy, and was just great in Western after Western. Lyles had used him on Law of the Lawless in ’64. 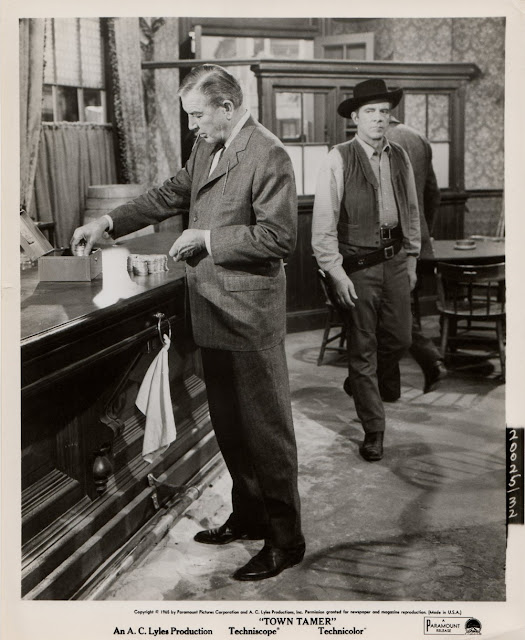 Saloon owner Bruce Cabot better watch out: Dana's coming
In the first reel he pays hired gun Lee Ring $2000 to kill Marshal Tom Rosser of Broken Lance, Kansas (Dana). Ring makes a hash of it, though, accidentally killing the marshal’s wife Carol (Western stalwart Coleen Gray, in her last oater). And who should Lee Ring be but Lyle Bettger! One of my favorite villains. Later, Dana goes up to the railroad boom town of Great Plains, Montana on a revenge quest where Condor has a new saloon and has treed the town. And who has Condor appointed as marshal? Why, Lee Ring, of course. 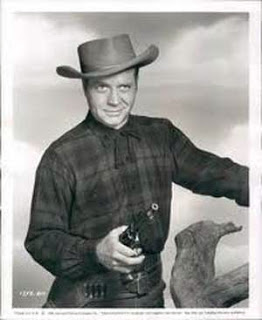 Gunman Lyle
And Richard Jaeckel is his thuggish deputy. And Philip Carey, whose character’s name is, amusingly, Akins, is Condor’s henchman in the saloon. See what I mean? It’s shaping up to be a great cast.


But I haven’t finished yet. Barton MacLane is the railroad baron who wants to oust the crooks and bring law ‘n’ order to Great Plains. Mayor of the town and liveryman is Lon Chaney. DeForest Kelley is a slimy gambler. Don ‘Red’ Barry is a cowboy after the bounty Condor has put on Rosser’s head. Richard Arlen is the doc. Bob Steele is in town too. And writer Frank Gruber is the hotel clerk! I bet they were all having huge fun. 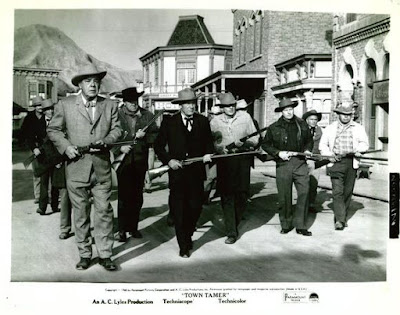 Lon leads the vigilantes
Well, even without a badge Dana cleans up the town (whence the title) and he does it with toughness, too. It all climaxes, as it had to, in a gun battle in the saloon which results in more bodies than Act V of Hamlet.


The ensemble verges on a parody of a 50s Western – but an affectionate one. I loved it!