I don’t mind John Payne Westerns. He was not maybe in the very top rank of Western actors, nor was he an especially charismatic actor; many will remember him most as The Restless Gun on TV. But he was solid and some of his big-screen efforts were perfectly creditable. Such a one is his 1953 outing, for Paramount, no less, The Vanquished. 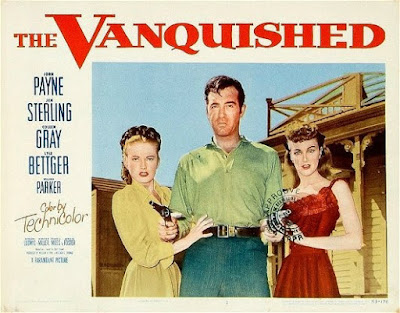 Payne saves the town - and has a choice
I also like this picture because Lyle Bettger is the villain, and I am a bit of a Lyle fan on the quiet. This was in fact only his second feature-film Western (he had been Sterling Hayden’s smiling sidekick in Denver & Rio Grande the year before). Blond men make good villains, for some odd reason, and none better that Mr. Bettger, who villained his way from Western to Western all through the 1950s and 60s. The only trouble with The Vanquished, though, is that he doesn’t smile enough. He’s just a dead-straight out-and-out bad guy. Lyle was at his best when being charming. Like a snake. 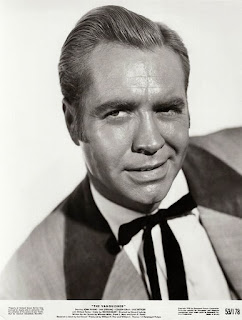 Great villain
The Vanquished is no great classic. The studio brought out Shane that year and The Vanquished is certainly not in that class, nor can it really compete with Warner Bros’ Hondo or MGM’s The Naked Spur. But it can hold its head up among the likes of, say, Thunder over the Plains (a movie with which it has certain things in common), The Nebraskan or The Moonlighter, and it was a lot better than the clunky Pony Express or noxious Arrowhead (both the last two also Paramount).


It’s a Reconstruction story. Usually in Westerns (such as, indeed, Thunder over the Plains) this is an unmitigated Bad Thing. Reconstruction stories are always about evil and dishonest carpet-baggers, backed up by Union troops, oppressing the decent Southern folk with taxes and appropriations. No mention of the benefits of Reconstruction is ever made and if African-Americans appear at all they are referred to as darkies and are the object of derision. There is usually a courageous ex-soldier (Union or Confederate) who takes up the cause of the (white) locals and bests the crooked Northerners.


But The Vanquished is slightly more subtle than that. Yes, it does have an ex-soldier hero (Payne) thwarting the oppressor (Bettger) and true, there are no African-Americans to be seen except as silent servants. But the military authorities, in the shape first of General Hildebrandt (Charles Evans) and, when Bettger murders him, General Morris (John Dierkes, splendidly bearded) are full of integrity, and they are decently determined to stamp out corruption, which they do. And Bettger, and his mistress Rose (Jan Sterling), a former seamstress for the rich folk, are local people getting their own back, not Northerners.


Three people worked on the screenplay, including Winston Miller, who had collaborated with Selznick on the script of Gone with the Wind, but he said, “Westerns happened to be what I could do best. There are a lot of pictures I couldn't do, like a highly dramatic Bette Davis picture. I can only speak for myself, but you find your niche, you find that other people like it. I never took an assignment I didn't think I could make a good picture out of.” He did My Darling Clementine for John Ford, and wrote smaller but classy Westerns such as Fury at Furnace Creek and Station West. So that’s probably why the screenplay of The Vanquished is as interesting as it is. 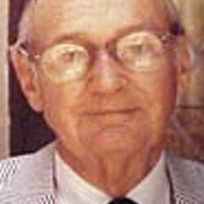 A bit grainy but the only photo I could find of Winston Miller
The director was Edward Ludwig, who had been an actor in silent movies, then screenwriter, and had started directing in the 1930s. He made the successful war film The Fighting Seabees with John Wayne at Republic, and later directed a lot of Western TV shows, notably those Restless Gun ones with Payne. He didn’t do many big-screen Westerns, though. This was his fourth of only five. 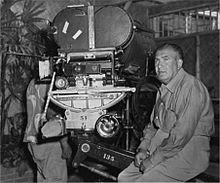 Ludwig
It may have been Paramount but it was still a B-Western. You can tell it’s low-budget. There are few exteriors and most is done in the studio. Still, it is in Technicolor.


It’s 1866. In the first reel Payne rages to the military at the injustice of the corrupt administration of Roger Hale (Bettger) in his (unnamed) Southern home town, but as soon as he gets there he declares to the town notables in the saloon that he has no interest in opposing Hale, and indeed he goes to work for him, foreclosing and such. Of course we know that he is undercover, working to get the dirt on Hale, but the townsfolk don’t know that and they ostracize him. Well, Hale has personally hanged a citizen in the main street in the first reel so no wonder he and his henchpersons aren’t very popular. Willard Parker is one of those. He is the corrupt Army captain in on Hale’s nefarious schemes. 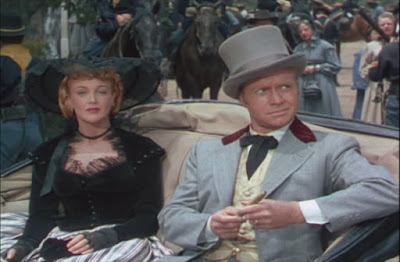 Lyle lords it over the town with his lady - I mean, woman, Jan Sterling
Apart from Rose, who, Hale says, will be a rich woman, but never a lady, there is the doctor’s glam daughter Jane (Coleen Gray) who used to love Payne before the war and now re-falls for him. She is demure and proper but plucky and determined. Ms. Gray was a former Fox starlet who had had the honor of being fifth-billed in Red River and then appeared in three B-Westerns. Jan Sterling, Rose, was an actress who specialized in the sulky pout and the year after The Vanquished would be Oscar-nominated for her part in The High and the Mighty with Wayne. Earlier in ’53 she had been ‘the other woman’ to Rhonda Fleming in the rather dire Pony Express. 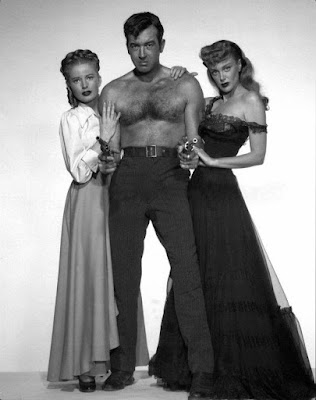 Oh dear, these studio publicity stills...
There’s a good bit with some scissors which has a Hitchcockian tinge and also reminds you of The Furies. 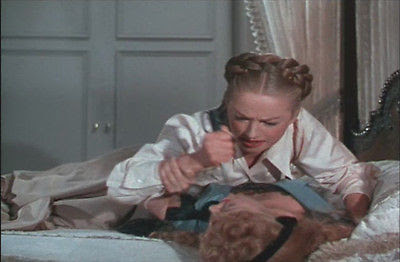 Scissors
Worth a look.