The Lone Ranger rides (yet) again

The Lone Ranger first appeared in 1933, broadcast on a Buffalo, then on a Detroit radio station. The show was written by Fran Striker. Buffalo actor John L Barrett was the first masked man, a few weeks before George Stenius (who later changed his name to George Seaton) took over. Striker went on to script various Lone Ranger novels, two movie serials, and The Lone Ranger comic strip. We owe him much. 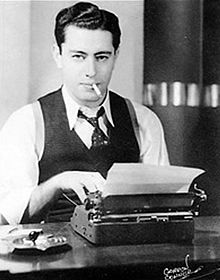 Fran the Great
Much earnest and scholarly historical research has revealed that the character was originally believed to be inspired by Texas Ranger Captain John R. Hughes, one of the 'four great captains', to whom the book The Lone Star Ranger by Zane Grey was dedicated in 1915. Though when you read about Hughes you find it hard to see why.

The 'four great captains', John Hughes on the left. He doesn't look much like Clayton.
In 1949 the masked man moved to TV. Perhaps, on radio, he hadn’t even been wearing a mask. A frightening thought. Eight small-screen series followed, for a total of 221 episodes, and it was a big hit for ABC. As a small boy I thought it was the best thing ever. The masked man, as everyone knows, was Clayton Moore. Clayton's tenure was interrupted. There were legal wrangles – the whole Lone Ranger franchise has been beset by lawsuits - and he was replaced in series 3 by John Hart (who played the crusading newspaper editor in the 1981 movie). Clayton rode again, though, from series 4 on.


Tonto was the great Jay Silverheels. The character Tonto hadn’t even appeared until the eleventh episode of the radio serial but thereafter was essential to the whole show. The Lone Ranger had to have someone to talk to. But poor Tonto was basically a servant and often had to take instructions, meekly saying, “Me do.” 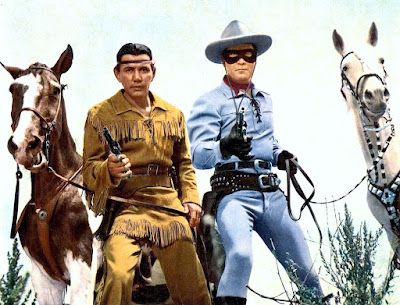 
But in 2003 Turner made a TV-movie, entitled simply The Lone Ranger. 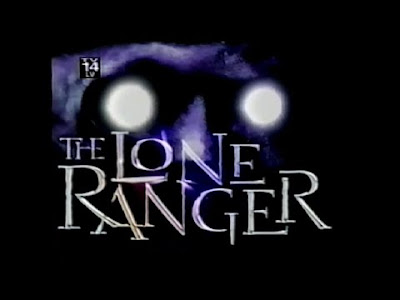 It’s a very 21st century take on the tale. It is accompanied by turn-of-the-century rock music and stars young actors with perfect teeth and tans. The dialogue – and the diction of the cast delivering it – is anachronistically modern. It was directed by Jack Bender, about whom I know little. Present day politically correct elements are introduced. All in all, it is pretty ordinary. Still, I suppose it’s no worse than many of the B-Westerns of yore.


A young boy dreams of a white horse, then he is suddenly grown up and on a stagecoach West. It is a certain Luke Hartman (no Reids here), graduated in law from Harvard, going to join his Texas Ranger brother Harmon in Dallas. Harmon rides off with other (badge-wearing) Rangers to track down a gang of Regulators selling guns to the Indians (a crime in Westerns that comes somewhere on the scale of wickedness between cannibalism and matricide). This gang surprises the Rangers in camp and slaughters them. These bad guys are not headed by the wicked Butch Cavendish, though, but by a turncoat Ranger, Kansas City Haas (Dylan Walsh).


Luke rode out to join his brother but though badly wounded, he survives. In town before leaving he had gallantly saved an Indian girl (Anita Brown) from some thugs in an alley and the girl’s brother, Tonto, is duly grateful. So Tonto follows Luke and is on hand to nurse him back to health.


This Luke, who will, obviously become the Lone Ranger, is played by Chad Michael Murray. I don’t know any of these actors. He’s OK, I guess. Tonto is Nathaniel Arcand, ditto. They both look very young but that’s alright. The masked man and Tonto, 2003-style
Now we enter a period when Tonto (advised by his wise shaman Wes Studi, who adds a bit of weight to the cast) becomes apprentice to Tonto, learning Indian skills. He finds it hard when urged to free his spirit. “I’m from Boston. I don’t have a spirit.” (So there is one good line at least). There’s some mumbo-jumbo when he eats some jerky that Wes gives him and hallucinates, seeing the ghosts of his brother and dad. He also meets Silver. There are some continuity issues as he was all unshaven and dirty when tripping but is suddenly all clean and shaved. Still, he soon becomes an honorary Apache (yes, Tonto is an Apache this time) and has mastered all sorts of kung-fu-like martial arts.

Don't worry, Nothing homoerotic. They invented a sis for Tonto so the masked man could canoodle with her
It’s all family-friendly. Luke gets it on with Tonto’s sis in the bath in soft focus but discreetly, you understand (anyway then he wakes up and it was all a dream), and our hero is a substitute dad to his little nephew. “I love you, Uncle Luke.” It’s all heart-warming, sigh.


The dialogue is weak, occasionally asinine. “Sometimes I feel like my heart’s just gonna burst out, go flying around, make a big mess. You ever feel like that?” 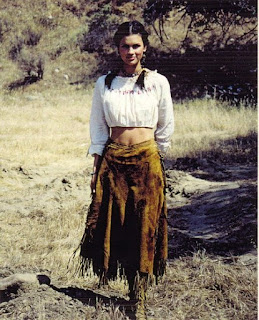 Tonto's sister, the masked man's inamorata
Well, it all goes on and Tonto and the new Lone Ranger, given his mask by Shaman Studi (rather creepily made from his dead brother’s leather vest) kill Kansas City, beat the bad guys and, rather suddenly, the strains of Rossini rise, the masked man and his sidekick gallop off and it’s the end.


Well, quite a bit of the Lone Ranger lore is here, though there are no silver bullets. Luke is neither Lone nor a Ranger. It’s unobjectionable but it’s rather saccharine and, I don’t know, I wouldn’t want to watch it again. 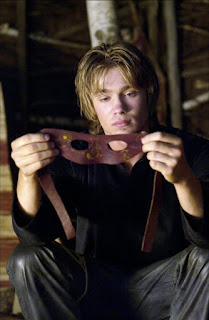 Slightly creepy
It’s actually difficult to see who it was aimed at. Judging by the youth of the cast and the music, it was for late teens or early twenty-somethings. But they wouldn’t have heard of the Lone Ranger and wouldn’t probably care if they had. It’s too ‘young’ to be aimed at old duffers like me.


Any of the other versions would be a better watch. I gave it two revolvers instead of one because, well, they made a Lone Ranger picture, so they deserve some credit.
Posted by Jeff Arnold's West at 8:31 AM