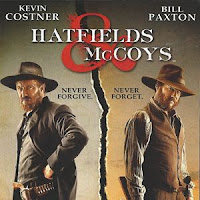 This TV three-parter was the History Channel’s first venture in dramatized history. Fact or fiction, let’s call it faction. Most Westerns go for a pseudo-historical approach but usually play fast and loose with historical truths, concentrating more on action and romance – though quite a few claim factual accuracy, usually falsely. With the History Channel, however, we have a right to faithful presentation of the actual events, Western movie or not. I am not enough of a historian to know if the channel has delivered on that and given us the, er, real McCoy, but the TV shows do conform to what I have read anyway. As to the motives of the participants suggested, well, that is anybody’s guess.


The feud is so famous that the History execs, director Kevin Reynolds (who worked with Kevin Costner on Waterworld and Robin Hood) and scriptwriters Ted Mann, Bill Kerby and Ronald Parker were perhaps sticking their necks out. Many people think they know what happened, and, believe it or not, there are still partisans of one side or another. There had already been a 1975 mini-series, The Hatfields and the McCoys, with Jack Palance in the Devil Anse Hatfield role and Steve Forrest as Randall McCoy, but that was not renowned for its historicity. In 2012 they had to be more careful.


Casting Kevin Costner as patriarch Anse Hatfield was slightly weighting the balance. Costner is a goody. After all, he was the noble Army officer who befriended the Sioux in Dances with Wolves. He was the courageous, town-taming marshal Wyatt Earp. He fought for the rights of decent folk alongside Robert Duvall in Open Range. By casting him as a Hatfield, the producers (of which Mr. Costner was one) were slightly predisposing us viewers to one side. Still, the film does not scruple to give us prejudice and idiocies on both sides. 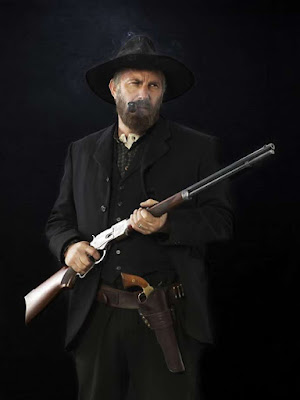 Costner is Devil Anse
It starts in the Civil War with fellow-Confederates Hatfield and McCoy fighting side by side. Anderson Hatfield is brave and saves Randall McCoy’s life but later deserts and returns home, which embitters Randall, who sticks it out and comes home much later to find Hatfield doing well from the timber business.


The events then unfold without glaring falsehoods and we get the theater-of-the-absurd trial of the pig – which has been et, your honor. 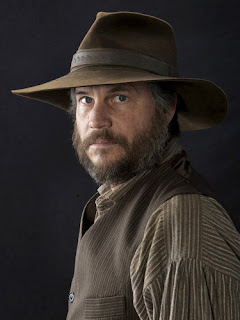 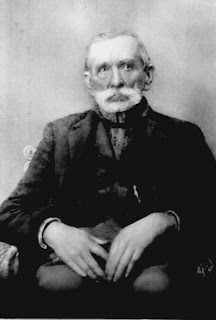 Randolph (or Randall) McCoy
The overriding impression one is left with is the stubbornness, the clenched-teeth gut-hatred but above all the sheer stupidity of these people. And fueled by locally-produced liquor and with firearms ubiquitous, grudges were almost bound to flare up into violence.


The Romeo & Juliet romance is made the most of (some Hatfields did in fact marry McCoys). 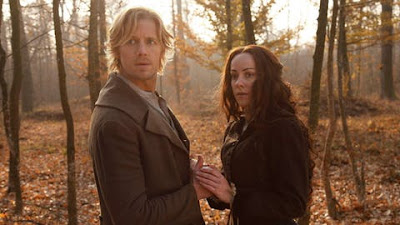 A rather dumb Romeo & Juliet
Of the actors, Costner is impressive and patriarchal, ditto Bill Paxton as the leading McCoy. Especially enjoyable is Powers Boothe as the Hatfield judge (though you can’t help thinking of his Cy Tolliver). I thought Tom Berenger excellent as the even-more moronic and violent Uncle Jim. Several of the actors (and make-up people) manage similarity to known photographs. 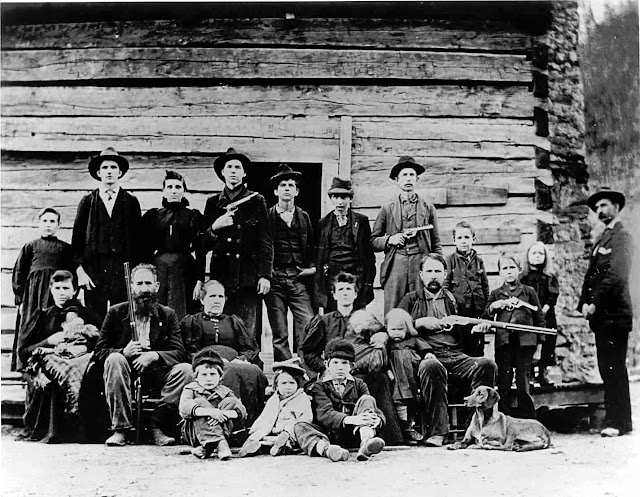 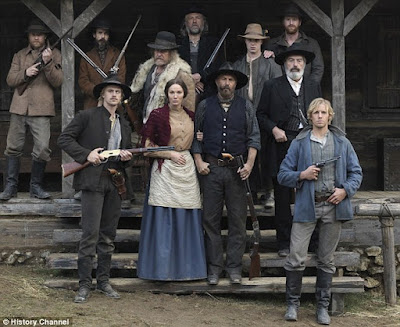 TV version, 2012
The other impression I was left with is how long it is. The story spans decades, and it sometimes feels like it. This is something of a Costner failing, actually (Wyatt Earp and Dances with Wolves can feel interminable). As it is difficult to sympathize with one side or the other – they both seem complete morons – the series does begin to drag after a while. The total runtime of 290 minutes might usefully have been cropped. At least I was able to watch it on Netflix. The very frequent fades-to-black indicate that it must have been hell on earth to see it on TV.


It was filmed in Romania. I guess that’s the nearest we can get to nineteenth-century West Virginia/Kentucky terrain these days. 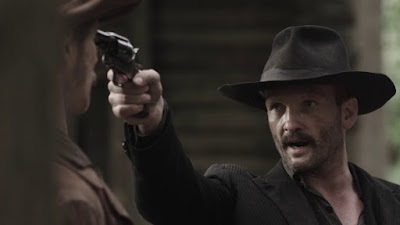 
As the crimes multiply you do find yourself wishing it came with a family tree. Who are these people? You just begin to lose track. People at the time probably did, too.


Well, you could watch it. It’s not bad. But you’ll need some stamina. 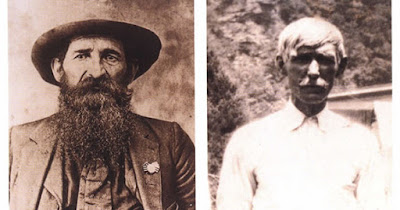