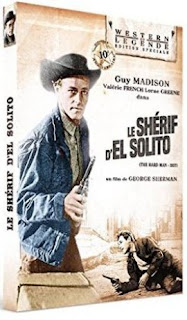 Commenting recently on a post about Guy Madison’s first Western, Massacre River, reader Bart recommended The Hard Man, a later Madison effort. It’s quite a rare film (for example it never got a theater release in France) but it is available on a Sidonis DVD. Sidonis have annoying subtitles you can’t turn off and furthermore you can’t search the catalogue by title – you have to know the French name of the movie - but the picture quality is excellent and they do choose some rarer Westerns, often quite good ones that have been overlooked. Anyway, I ordered it and watched it last night.


Madison had found Western fame in the long-running TV show Adventures of Wild Bill Hickok, in which he and his portly sidekick Jingles (Andy Devine) roamed the West doing good, as TV Western heroes were wont to do. It ran pretty well all through the 1950s. But the big-screen oaters he occasionally did between Hickok seasons were grittier and more adult. He’d led in the Gordon Douglas-directed The Charge at Feather River (to be reviewed at some point) in 1953, and Warners’ The Command in ’54. More importantly, he was second-billed in The Last Frontier in ’55, directed by Anthony Mann. In 1956 came Reprisal!, directed by George Sherman.

The diminutive Sherman (right) began his career in the movie business in the mail room at Warner Brothers before working his way up to assistant director. By 1937 he had graduated to directing in his own right at Republic. He specialized in B-Westerns there, including the Three Mesquiteers series, with a young John Wayne. Variety, writing about his handling of the series, even commented on his imparting a "poetry in motion" to his "unified timing of cowboys mounting, riding, wheeling, galloping and dismounting of steeds", which was probably a bit over the top, but he was certainly a pro who knew his business. And just occasionally he turned out a really solid picture, like Comanche with Dana Andrews, Hell Bent for Leather with Audie Murphy and (especially good) Dawn at Socorro with Rory Calhoun. B-Westerns by many people’s standards (it depends on your definition of a B-Western) some of his pictures were taut, well-written, acted and photographed, and noticeably well directed. The Hard Man is one such.


Madison was not perhaps the strongest of Western leads. He did best in roles where he was an ordinary Joe who has to step up to the plate when the going gets tough. In this one, though, he is Texas Ranger Steve Burden, with a rep for not bothering about the …or alive part in WANTED posters. In the first scene, very reminiscent of the opening of Warners’ Seven Men from Now of the year before, Burden comes up on his quarry (Myron Healey), and, though reluctant, nevertheless shoots him dead. The Ranger captain (Francis De Sales) doesn’t approve and is happy to accept his resignation but a visiting sheriff (Robert Burton) thinks that here is the guy (or Guy) he needs. The sheriff is aging and has lost his willingness to brace dangerous gunmen. He believes Burden will do that for him. As Burden thinks the man he shot was framed back at the sheriff’s town and may have been innocent, he takes the job of deputy – in effect, hired gun – in order to find out. 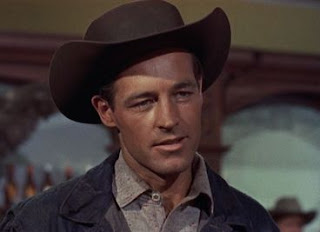 He's the Guy
The rest of the tale is a tense town drama whose central figure is a woman. Valerie French had been Mae in the Delmer Daves-directed Jubal the year before and there are definite similarities between Mae and Fern, the part she plays in The Hard Man, a manipulative, ruthless rancher’s wife. The movie could almost have been called The Hard Woman. Her husband is the town boss but she is ready to make up to any man who will kill him so that she may inherit. Because she is beautiful and seductive, several men fall for her wiles. She also reminds me of Connie in Ramrod – the glacial Veronica Lake. 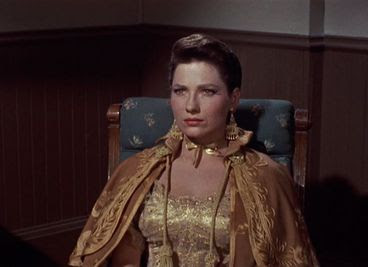 The Hard Woman
The husband, Rice Martin, is very well played by Lorne Greene. He is no decent Ponderosa patriarch here, but a really unpleasant crooked rich man ready to resort to murder to get his way. The part would have suited Lyle Bettger or David Brian, or a shade earlier Victor Jory. But Greene does it very well. 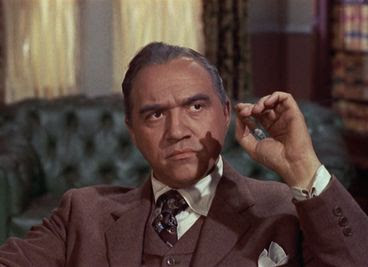 Bad guy Lorne
Well, hard man Guy does his job – all too well. The sheriff begins to have qualms when the man he has hired faces down and kills Martin’s henchman Rodman (Rudy Bond, quite good as tough guy who likes killing). But we know Guy isn’t really just a bloodthirsty hired gun because he is nice to a boy (Rickie Sorensen), son of a rancher being forced out by grasping Martin. When Martin’s men murder the father, Guy unofficially adopts the lad. Of course no one who is kind to animals or children in the first reel can be bad. 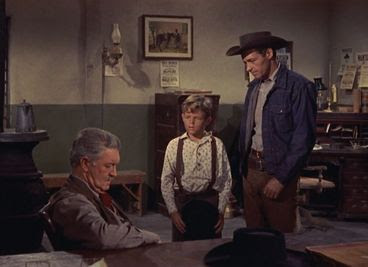 The aging sheriff, orphan boy and protective deputy
Trevor Bardette is good as Willis, the alcoholic spy in town of Martin, and Frank Richards adequate as the other henchman, Kane. George Dennison (Barry Atwater) is the smoothie lawyer retained by Martin and doing his nefarious bidding while secretly romancing his wife – a dangerous game. Martin disposes of him pretty ruthlessly. 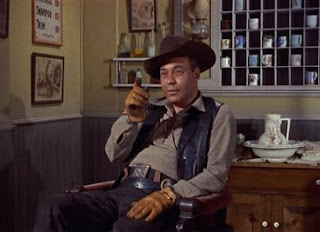 The henchman about to be broken by the lawman
Sherman has some good touches, for example first building up Fern’s reputation (mention of her name silences conversation), delaying her entrance and then showing her hidden in shadow. It’s well done. I also liked the many references to time: at one point Guy kills time by shooting a High Noonish clock.


The climax is also very well handled (Sherman was good at that) when Martin hires in another thug to shoot down the deputy. Guy knows the man is in town but doesn’t know who it is. We too don’t know, though finally suspect when we only see the man’s chaps-clad legs – again the figure is at first hidden. At last we suddenly see he is wearing an eyepatch, and we have been told that the hired killer had a patch. Martin is thus left to face the deputy one on one, as Guy always told him he would. And there is a clever trick with Martin’s pistol.


This is a good Western. It might have been better with a slightly stronger lead, Rory Calhoun, say. But Madison isn’t bad. And the whole picture is skillfully crafted. 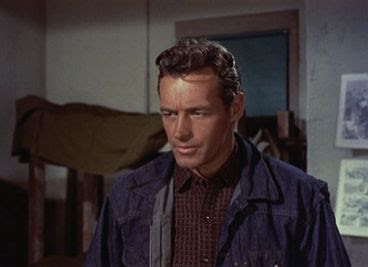