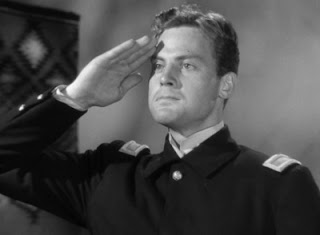 John Agar (left) first appeared in Westerns for John Ford in Fort Apache in 1948, with his wife Shirley Temple, and returned in She Wore a Yellow Ribbon the year after. So it was a five-star Western debut. After that he was rather miscast as one of Kirk Douglas’s deputies in Along the Great Divide in 1951 and had secondary roles in a Republic Rod Cameron picture, Woman of the North Country, in ‘52 and an independent B-movie, The Lonesome Trail, in ’55. So he had some background in the genre. Star in the Dust, a reasonably well-budgeted Technicolor offering from Universal, was his first Western as lead. He was OK, I guess.


It’s not quite clear why it’s called that. Agar is a sheriff but never throws down the badge, High Noon-style. I guess it was just a snappy name.


It’s a very Tom Horn-ish story. The Horn figure is Sam Hall (Richard Boone, in rather dudish Have-Gun black with dashing red kerchief) and Sheriff Agar is holding him in a cell waiting for sundown, the hour appointed by the judge for the hanging – for he has been convicted of murdering three farmers, including a boy, the Willie Nickell figure, obviously. The rich cattlemen hired him to kill homesteaders to dissuade others from settling on ‘their’ open range. 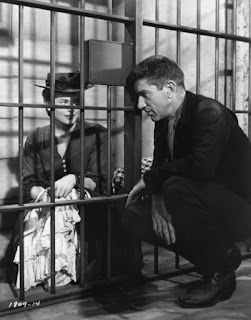 Killer Hall gets lover Nellie to help him escape
The town is split into two camps, both armed and ready to ride. Leif Erikson is the ruthless boss of the ranchers, with Harry Morgan as his pugnacious lieutenant, and the farmers are led by decent Stanley Andrews, with unpleasant schoolmaster Robert Osterloh as their spokesman. The ranchers want to bust Hall out of jail and get him out of the country while the farmers want to break into the jail and lynch him. The sheriff is piggy in the middle.


Paul Fix is Agar’s deputy, so that’s good. There’s also a semi-comic old-timer (James Gleason) who builds the gallows and becomes another deputy, and he turns out to be more resourceful than first imagined. So the sheriff is well supported.


This was Clint Eastwood’s first Western and he has a walk-on two-line part in the first reel as a cowpoke. 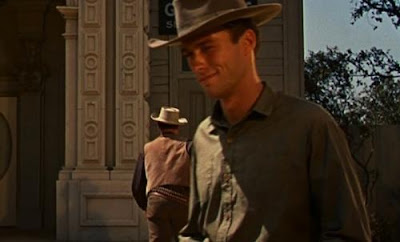 Clint's debut
There are dames, of course. The sheriff loves Leif’s sister Ellen (glam blonde Mamie Van Doren) but she appears conflicted in her loyalties. And Harry Morgan’s wife Nan (Randy Stuart) used to be Leif’s lover and she agrees to help smuggle a gun to Hall. Later she realizes she has been duped. Then there’s Nellie (Coleen Gray) who has fallen for Hall. Actually, to be fair, these characters are quite strongly delineated, and Ms. Stuart anyway rather good. 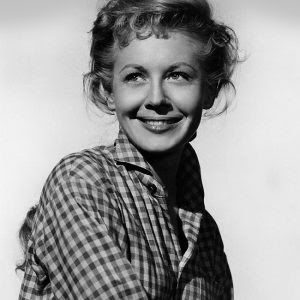 Randy is good
It’s all a bit cliché-ridden, to be honest. At one point Fix says, “Sure is quiet” and later Agar says, “Too quiet”. Original it ain’t. The writer was Oscar Brodeny, from a Lee Leighton novel. Brodney had worked on the screenplays of Harvey and The Glenn Miller Story and did some Westerns, notably Frenchie.


There’s a minstrel who sings a running commentary which rapidly becomes annoying. It’s Terry Gilkyson, and I’m afraid his ditty is pretty banal but he wrote Bare Necessities for The Jungle Book, so we forgive him, for Bare Necessities is of course the greatest song ever written in human history, eat your heart out, Schubert.

Gets a bit annoying
There’s an attempt at psychological Western with Agar constantly being reminded of how good a sheriff his dad was. That isn’t original either. Agar wasn’t exactly charismatic as an actor but in a way the role required that. He is supposed to be “not the man his father was.” 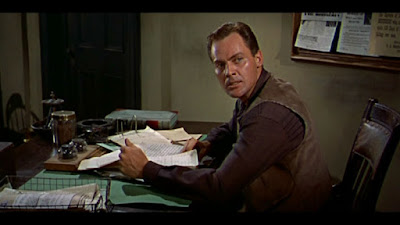 John Agar, not the sheriff his dad was
It’s shot in Universal’s attractive Western town (you’ll recognize it from countless other oaters) and the color is bright and print-quality good.


The gallows is burned down (good) but it doesn’t save Boone, for an oak tree stands handy. There’s a melodramatic ending on a rooftop.

The end is nigh
The director was Charles Haas who had been an extra at Universal, promoted to assistant director, and produced and wrote various pictures, several with Marilyn-wannabe Van Doren. This was only his second picture in the director’s chair, and first Western. 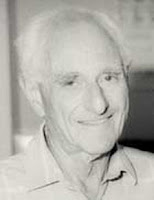 Haas
Boone was reliably good. In this he reminds me a bit of Claude Akins in jail in Rio Bravo. Agar is no Sheriff John Wayne, though (actually, Wayne liked Agar and gave him parts in several of his later Westerns).


But all in all the picture is a bit average. It’s pleasant enough, and the acting passable. I hesitated between a two- and three-revolver rating, and may have been a bit mean. I liked the bit where the sheriff beats up the schoolmaster, wrecking the schoolroom to the delight of the kids, then fines himself for disorderly conduct. 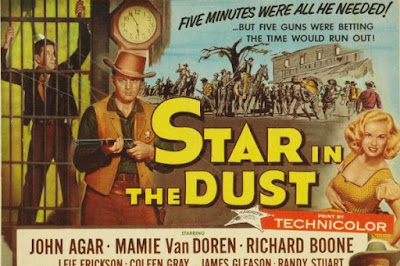