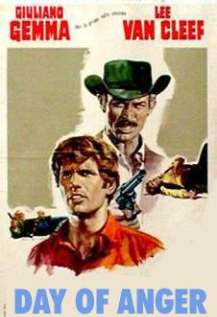 Day of Anger (original title I giorni dell’ira) was a classic spaghetti western with Lee Van Cleef. It was directed and co-written by Tonino Valerii, well known to spaghettisti for My Name is Nobody. He was a Leone acolyte and contributed to the script of A Fistful of Dollars, and directed other spaghettis with Craig Hill and James Coburn. So I guess if you like spaghetti westerns he’s a top guy. Certainly the opening titles of Day of Anger are pure late-60s spaghetti, absolutely classic, with lurid colors, cartoon horses galloping, whiny gunshots and jangly music – the works.


Lee Van Cleef was of course a top spaghetti name, having been Colonel Mortimer for Sergio Leone in For a Few Dollars More in 1965 and Angel Eyes in The Good, The Bad and the Ugly in ’66. He went on to do a whole series of spaghettis. He was soon to be Sabata. In Day of Anger he plays a typical Van Cleef type, an infamous and lightning-fast gunfighter who comes into town and cleans the place up. Then he goes a bit crazy and shoots everyone in sight.


We are told that “since Doc Holliday died at the OK Corral”, Talby (Van Cleef) is the most feared gunman in the West. These spaghetti writers and directors were admirers of proper Westerns and Tonino Valerii seems to have taken his version of history from My Darling Clementine.

Lee rides in
Van Cleef’s co-star was the top-billed Giuliano Gemma, a former stuntman who got into spaghetti westerns early and under the name Montgomery Wood was Ringo in 1965. You’ll recognize him if you watch Day of Anger. He plays a put-upon and bullied town youth with the unenviable job of emptying the night soil in Clifton, Arizona. When Lee rides in he gets a new champion and friend.

Bullied youth becomes feared gunfighter
As may easily be guessed, Lee teaches the boy to become lightning fast with a gun too, and the day of anger – or rather bloody vengeance – nears. There are the inevitable plot twists to keep us awake, and they almost do.


The New York Times review of the time said


For "Day of Anger" there is not much good to say. It is a strange and muddled film, very long and mostly boring, depending for its plot upon notions of class and caste that seem foreign to the genre if not to real history.


Which probably gets it about right.