Duke goes through the motions

During the 1930s John Wayne made a long series of B-Westerns: three dreadful ones for Columbia 1931 - 32, six rather fun ones for Warners 1932 - 33, sixteen formulaic and very low-budget oaters  for Monogram/Lone Star 1933 – 35, and then Republic, where he was to remain right through into the 1950s. He made four Republic Westerns in 1936, one of which was Winds of the Wasteland. They were OK, I guess, and at least he was working. 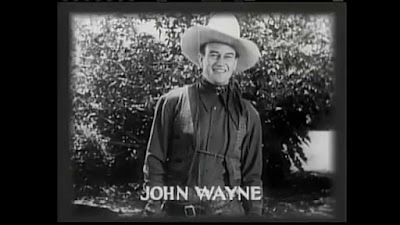 The film is announced in the screen text intro as a telegraph picture and so we think we are going to get Republic’s answer to Warners’ (relatively) classy The Telegraph Trail of 1933, but that is a false hope for the building of the telegraph is very peripheral to the plot, which is essentially about how John Blair (Wayne was nearly always John Something) and his pard Larry (plummy-voiced Lane Chandler, who had flirted with cowboy stardom at Paramount but was now settling in to support roles and character parts), laid off by the Pony Express, start up a stage line. 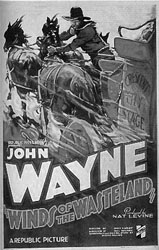 They are conned into buying the franchise of the route to a thriving community which turns out to be a ghost town (they were too dumb actually to go there and check before paying up) by crooked stage-line owner Cal Drake (Douglas Cosgrove) but they decide to make a go of it anyway. They hear of a race which will be run for which the prize is $25,000 and a mail contract (the plot is a bit short on plausibility) and they decide to enter. Of course crooked Cal wishes to foil their efforts and he and his evil henchmen (among whom is Yakima Canutt) will stop at naught to thwart them, indulging in all kinds of skullduggery. 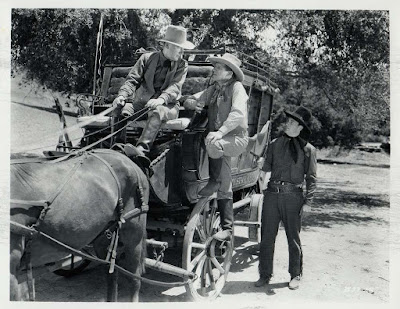 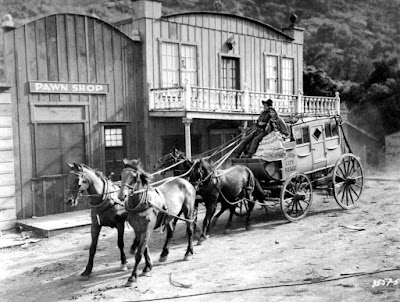 The rival stages
There’s a gal, naturally, Barbara (Phyllis Fraser) who first finds John bossy and superior but then, equally naturally, falls in love with him, and, may it be said, vice versa. If I tell you that Ms. Fraser, whose only Western this is, is best known for this picture you will gauge the level of her stardom. 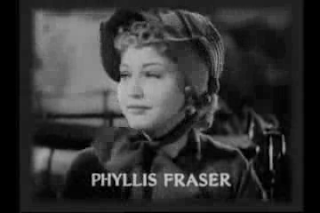 There also obviously has to be a comic old-timer and this time it’s Rocky (Lew Kelly, a veteran of Westerns dating back to the silent days). He inhabits the ghost town and is mayor, sheriff, postmaster, et cetera. He’s quite amusing, I suppose. He closes proceedings in the last reel by appearing with a tame skunk on a lead. 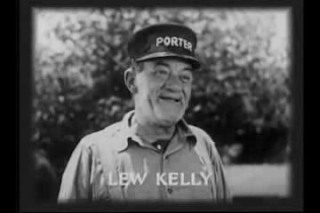 The stage race is all very dramatic, though I felt sorry for the poor horses. There’s arson, dynamiting, mucho shooting of course, and the odd fistfight (sadly no sign of Duke’s classic roundhouse). Someone wins the $25,000 prize by a short head but no prizes to you for guessing which stage crosses the line first. 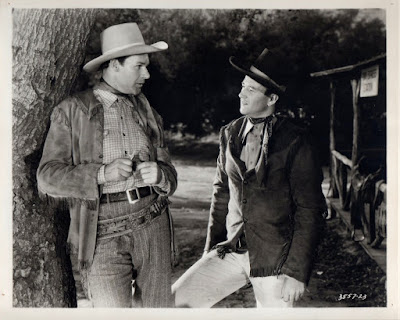 The pards
Posted by Jeff Arnold's West at 2:18 PM