Possibly the best of 'em

OK, yes. I agree. I know I said that was enough John Wayne B-Westerns for a while. But I did quote General MacArthur and say, “I shall return”. To the theme, I mean. I agree, it took Doug over two years to arrive back in the Philippines and the local population (not to mention the Japanese) would have been mighty surprised if he had turned up the Wednesday after leaving. Still, as far as blogposting is concerned, a man’s gotta do what a man’s gotta do, as any Western-lover knows, and when Western bloggers are on a kick, they are on a kick. I can’t help it.


And there’s another reason. The Trail Beyond is the last Monogram/Lone Star John Wayne Western to be reviewed on this blog. We have now watched, ruminated on and discussed all of them. As you know, there were sixteen, from Riders of Destiny in October 1933 to Paradise Canyon in July 1935. And do you know what? I think The Trail Beyond might be the very best of them! 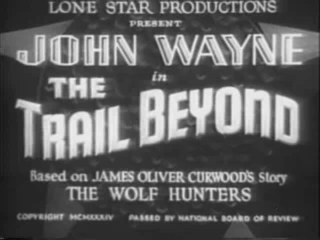 OK, there are a couple of classic elements missing. There’s no crusty old-timer, Gabby Hayes, for example, and Duke rides a bay, then a palomino, and not his white horse Duke. And there’s no sign of Yakima Canutt either (he did the stunts OK but didn’t appear as a henchman). But everything else is there and the usual suspects firmly in place: RN Bradbury directed, at his usual breakneck pace; Archie Stout was at the camera, giving Rob those flashy fast pans and snazzy fades he liked so much; Paul Malvern produced; Lindsley Parsons wrote the script. Yup, all’s right with the world. 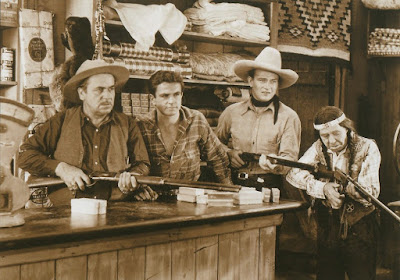 Another reason I like this picture is that it was one of the few times Noah Beery Sr. and Noah Beery Jr. appeared in the same movie. There they are together, left, with Duke and an unnamed Indian. Portly Beery Sr. (who challenged leading lady Verna Hillie to a drinking contest on the set of The Trail Beyond; history does not record who won) was a veteran of the silent days who made the transition to talkies, appearing in 50 Westerns from 1917 to 1945, and his son Beery Jr., only 21 at the time of The Trail Beyond, first appeared on the screen as a child actor in 1920, when he was seven, and was still doing TV shows in 1986. He outdid his dad by appearing in no fewer than 174 Westerns, over a period of more than sixty years. I actually think Noah Beery Jr. was a fine Western actor. (As well as being great as Jim Rockford’s dad). 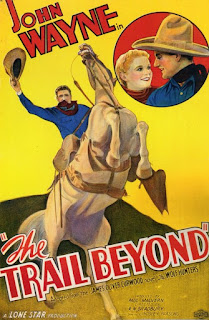 In The Trail Beyond he plays Wabi, a “half-breed”, wanted for murder (but falsely accused of course) who is an old school pal of our hero Rod Drew (Wayne, who unusually was not John Something) and Rod helps Wabi escape from a speeding (and very modern) train. They plunge into the water (or their stunt doubles do anyway) while the train passes over a high trestle.


You see Rod has been asked to go up to Canada (yup, it’s a Canadian story, with redcoats instead of bluecoats, but to all intents and purposes it’s a straight Western, with attractive Sierra Nevada locations doing duty for ‘somewhere in Canada’). Rod is charged by a friend (James A Marcus) with finding a lost niece, daughter of his disappeared brother, and bringing her back to live with her uncle and inherit his ranch. That’s when Rod bumps into Wabi. Thenceforth they get into all manner of scrapes together.


Purists regard movies set in Canada, or indeed in Mexico or other countries than the US West, as not true Westerns at all. But this one is pure B-Western, regardless of setting. All the classic Western action takes place. It just happens to be north of the border. 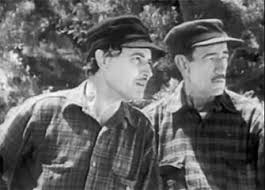 Now, not only do we have a brace of Beerys, we also have Earl Dwire the Great, habitual character actor in these Lone Star oaters, noted for his lugubriosity, and he plays Benoit, a French-Canadian henchman of the bad guy Jules LaRocque, renegade trader, played by Robert Frazer. The two bad guys, in their French-Canadian uniforms, are pictured left. The ‘French’ accents of both Dwire and Frazer are alone worth the purchase price of the DVD.


There’s a classic B-Western scene when Duke and Noah Jr. burst into an abandoned cabin and find two skeletons at the table. They also find a sack of gold and the map to where the gold mine is. Now you and I might find this all rather implausible, but remember the gullibility and average age of the audience then. Of course LaRocque gets wind of the map and will stoop to any skullduggery to get hold of it. 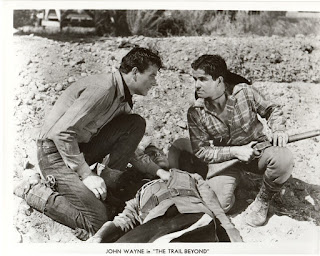 There are the usual stunts, especially the horse falls, which I hate. At one point Duke and Noah Jr. gallop up to a cliff over a lake. “We’ve got to jump!” cries Wayne. What he meant was, our poor mounts have to jump. At one point the hero is supposed to leap from the saddle of his galloping steed onto the buckboard of the baddy, but it goes wrong and Yak (presumably) doesn’t make it, falling into the dusty trail. But he gamely remounts, gallops alongside again and this time he succeeds. They left it in, and it looks more realistic than many a stunt.


There’s a canoe chase which was probably the prototype for Bullitt. Duke makes good use of his classic roundhouse punch. It all culminates in an attack by LaRocque and his gang (inc. Earl) on the trading post of Newsome (Noah Sr.). Benoit has hitherto emptied all the ammunition boxes in Newsome’s post but it doesn’t seem to affect them. They hold the gang off with a rate of fire that may only be described as profligate while Rod rides to the nearby police post to return with the Mounties at full gallop.


So it all ends well and Rod gets the girl (oh, I forgot to say there was a girl, but you knew that). 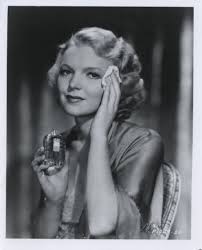 Hillie. I wonder who won that drinking contest? My money'd be on Noah.
You know, these Lone Star Westerns were huge amounts of fun. There were nine in 1934 alone, and as I said earlier, I reckon this one could be the pick of the bunch.


Someone forgot to renew the copyright on them with the result that they are all in the public domain. The downside of that is that many have been copied and recopied, and even edited, until the print quality is dismal. So you take pot luck. But the print I saw of this one was good.


Do watch them if you get the chance. 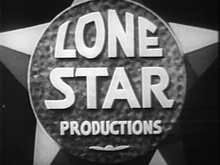