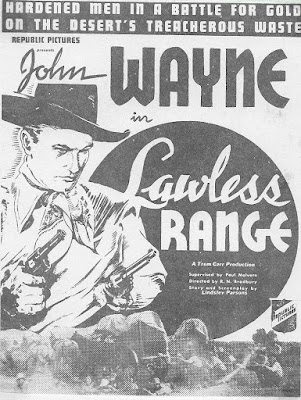 Lawless Range was the third Western John Wayne made for Republic in the first year of a long career with the studio. It had a classic line-up: Paul Malvern produced, RN Bradbury directed, Archie Stout was at the camera, Frank McGlynn Jr. was the villain and Yakima Canutt did the stunts and was a henchman. Perfect. And as if that were not enough, my hero Earl Dwire is in it too, playing the leading townsman.


It’s actually a lot of fun, in its formulaic way. John Middleton (Wayne was nearly always John Something) is a bulldogging star who sacrifices glory at the Cheyenne Rodeo when his pa (Sam Flint) asks him to go help out an old friend, fellow rancher Hank Mason (Wally Howe), who is in trouble. John dutifully sets off and gets recruited by the local marshal (Jack Curtis) in his office marked MARSHALL (a common mistake). John is to be an undercover deputy to infiltrate the rustling gang of Butch Martin and bring the ne’er-do-wells to justice.


As he rides off to the Mason spread on his white horse Duke, he sings to the strains of his soft guitar. Fortunately his singing voice is dubbed (by a rich and fruity tenor). He gets another song later, serenading Ann (Sheila Bromley, B-Western regular who was also Duke's gal in Westward Ho the same year), glam niece of Hank Mason (who has been kidnapped) - but that’s equally dubbed.


Once in town, you can tell who the baddie is right away because he is the banker and has a thin mustache. And it’s Frank McGlynn.


Other characters have very original names. A short fellow is called Shorty and a fat one Chubby. I don’t know how they think them up.


Everyone jumps to conclusions, assuming John to be on the opposing side, and they all try to shoot him or lynch him. But none quite succeed. 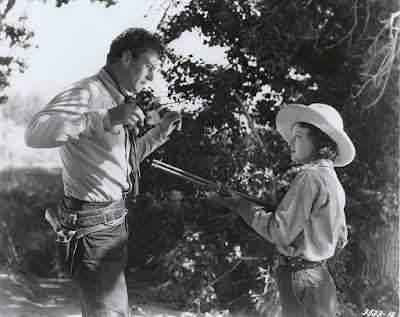 She jumps to conclusions
Unusually, though, this time there is no small boy (perhaps a younger brother of the gal) to be plucky and for the audience (average age about ten) to identify with, nor is there a comic old-timer. We have to make do without. 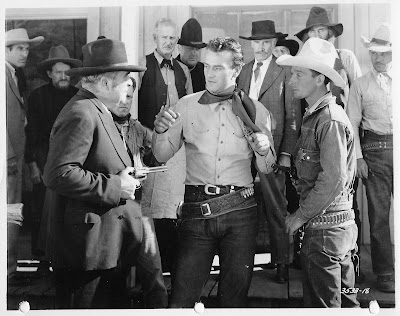 So does the marshal(l)
Still, Henchman Yak makes up for it by being really villainous. And, oh joy, featuring as henchman’s henchman, i.e. Yak’s No. 2, is Glenn Strange the Great! Any picture with Glenn in it is worth watching. 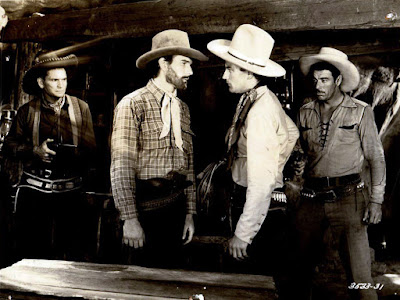 While baddy Frank McGlynn talks to Duke, Yak Canutt and Glenn Strange hold him at gunpoint
The print quality is poor to middling, I fear. Why no one has remastered these priceless masterpieces is a mystery.


Well, after being bold, brave and valiant, John wins out, saves the day, unmasks the villain (by removing his false beard) and gets the gal. No spoilers here, you will agree.


It’s all undemanding fun, predictable and painless, and you will have 53 minutes of amusement if you watch it.