They called him Shanghai


“I am Shanghai Pierce, Webster on cattle, by God, sir.”
Abel Pierce, when asked his name by a hotel clerk.

Abel Head Pierce was born in Rhode Island in 1834, the son of a blacksmith. He received a rudimentary school education. Aged fifteen, he was sent to work in the store of his mother’s brother, for whom he was named, but grocer Abel Head was so pious and sanctimonious, and so often told the lad that he would never amount to anything that the energetic and restless boy couldn’t stand it. When Chester Robbins, who also worked in the store, went off to Texas and loved it, the youth decided to do the same. 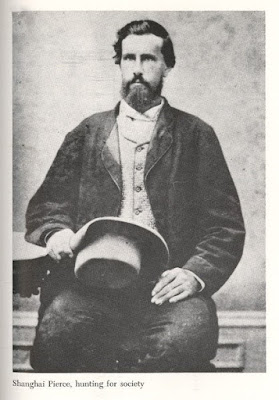 
He went to New York and stowed away on a steamer. When discovered he worked his passage and worked so hard that the crew were impressed. In June 1854, now six foot four inches, he found a job with “Bing” Grimes, a rancher who ran a slaughterhouse and packing business. Bing didn’t care for the cocky youth at first (especially because Abel set his cap at Grimes’s young sister) but the boy soon showed talent, intelligence and a willingness to work hard at any job, and Grimes promoted him. Gradually Abel began to do well and gather cattle on his own account. In fact he took his first year’s pay in cattle.


In 1860 Abel was joined by his younger brother Jonathan. History has sometimes overlooked Jonathan in favor of the more famous brother but in fact Jonathan Pierce was vital to Abel’s career. Quieter, more modest, happy to keep out of the limelight, he proved a highly talented bookkeeper and shrewd businessman. It was steady Jonathan who often ‘picked up after’ Shanghai when the blustering bigger brother’s rashness led to problems. 
Though they were Rhode Island Yankees, when the Civil War came Abel and Jonathan joined the Confederate forces, Shanghai being sent to the Matagorda peninsula and Jonathan to the Brownsville area. They both returned without a scratch but they found to their anger that in their absence Grimes had sold their cattle but paid them in worthless Confederate paper money. They had to start all over again.


The two brothers established El Rancho Grande, not so much legally owned land as open range they ‘adopted’ to gather some of the numerous unbranded wild cattle that roamed Texas after the war and ship them to market through ports like Indianola. The ‘sphere of influence’ of El Rancho Grande became huge and Shanghai boasted that his drift fence was the Gulf of Mexico. He said he owned a hundred thousand cattle. The final ranch house (they built several) was sited east of the future town of Blessing and was an impressive mansion.

Rancho Pierce
When the Chisholm Trail and others opened up the market to Texas cattle the Pierces had large herds driven north to the Kansas railheads, but they never stopped shipping out through Texas ports.


Soon after the war they both married, well. Abel wed Fannie Lacey, daughter of a rich and well-known neighbor, and Jonathan married Fannie’s sister Nannie. Shanghai and Fannie had two children, Jonathan and Nannie four.


My first recollection of Mr. Pierce was just after the close of the Civil War when he sought fat cattle all over south Texas. I remember seeing him many times come to our camp where he had contracts to receive beeves. He was a large, portly man, always rode a fine horse, and would be accompanied by a Negro who led a pack horse loaded with gold and silver which, when he reached the camp, was dumped on the ground and remained there until the cattle were classed and counted out to him; then he would empty the money on a blanket and pay it out to the different stock men from whom he had purchased cattle. He would generally buy 200 or 300 head at a time. … We all looked on him as a redeemer, and were glad to sell our cattle at any price, as money was scarce in those reconstruction days before the northern trail started.


Mr. Pierce was a loud talker and no man who ever saw him or heard him ever forgot his voice or appearance. He was a money maker, empire builder, and a wonder to his friends.


The largesse with silver and gold that Saunders mentioned didn’t mean that Pierce was a spendthrift. In fact his parsimony was legendary. Some said that he arrived in Texas with 75 cents to his name and the following year he still had 60 cents left. After completion of a cattle drive where he netted 25,000 dollars he added a note to his ranch boss to collect 50 cents from a cowboy he had loaned a pair of socks to.


But he could be generous. He once bought the lumber for a church that was being constructed. Later while riding by the church a visitor once asked, "Do you belong to that Church, Mr. Pierce?" The reply was, "No, that church belongs to me."


And he was perfectly ready to spend on himself, especially food, wine and fine tailoring. 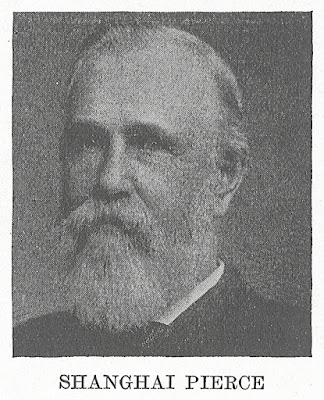 As to how Abel got the name Shanghai, there are various theories. One says he acquired the name because of his long neck which made people compare him to a Shanghai rooster, another because the Shanghai rooster was long-legged and Pierce’s height meant that he often had too-short trousers and looked 'leggy'. It may also have had something to do with the rooster’s strutting and its boastful mien.


This was a time when ranchers suffered much from rustlers. Not content with roping in unbranded mavericks, many Texans cut out branded cattle and slaughtered them for tallow and hides or sold them on. These depredations were also mixed up in the vicious blood feuds that Texas was riven by. The Pierces and their neighbors were the targets of the five Lunn brothers, who were ‘in with’ the Suttons of the infamous Sutton-Taylor feud. Shanghai and a posse of neighbors caught three of the Lunns and two other men red-handed and also found branded hides in their possession. In the rough manner of the times, the ranchers hanged all five men from the limbs of a dead tree.


A surviving Lunn brother brought charges against the ranchers, and Shanghai was summoned to appear before the Matagorda County Court. Knowing he was in serious danger, Shanghai, whose wife and infant son had just died, quickly sold a ranch for gold, handed over control of the business to Jonathan and traveled north to Kansas.


He declared that he had gone north to “hunt society” and he strutted about Abilene, spending freely and resplendent in fine tailoring and with a dashing walking cane. He was a local sensation. 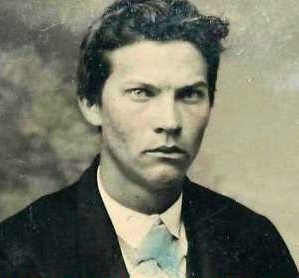 John Wesley Hardin: gunning for Shanghai?
Shanghai must have been nervous nevertheless. The noted killer John Wesley Hardin had come to Kansas (also to escape awkwardness back in Texas) and he was a known associate of the Sutton clan. Ben Thompson, too, who was a partner of Phil Coe in the Bull’s Head saloon in Abilene, was lethal with a pistol and a friend of Hardin’s. Shanghai removed to Ellsworth.


All this would really make a splendid Western movie. In fact Shanghai Pierce has not appeared that often on the screen. He featured in a 1957 episode of The Life and Legend of Wyatt Earp, The Big Bellyache, played by Roy Roberts. It’s on YouTube and you can watch it here. Shanghai, who, we are told, “kinda specializes in down-and-out show gals”, is in Dodge with a bad stomach ache and will only consult the cranky old doc there. In fact he wants to kidnap him and take him to Texas. He also doesn’t like Marshal Earp, who shoots up two of his henchmen. Luckily the doc operates successfully for appendicitis and he and Wyatt live to tell the tale. 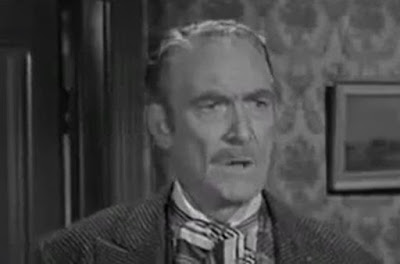 Roy Roberts as Shanghai
In 1960 Shanghai turned up in The Legend of Lily, an episode of Laramie, impersonated by George Tobias. 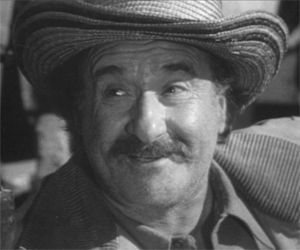 George Tobias as Shanghai
And in 1976 Howard Keel did the honors in Seventy-Two Hours, an episode of The Quest.
Perhaps most famous was Ted De Corsia’s portrayal on the big screen in Gunfight at the OK Corral in 1957. Wyatt has to deal with his shenanigins in Dodge. 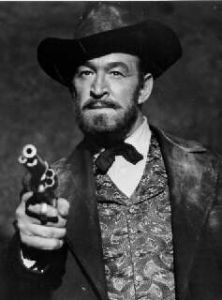 Ted De Corsia as Shanghai
None of these Shanghais came close to the real one and it’s time for a really good one to figure largely in a Western movie or HBO series or something.


Pierce journeyed to Omaha where he met Herman, one of the remarkable Kountze brothers, whose banking interests went from New York right across the West. Together they bought cheap railroad land grant certificates and combined them into huge tracts in Texas. In this way Shanghai managed to encircle the lands of his old enemy Bing Grimes, and prevent Grimes’s access to unbranded cattle. Bing eventually accepted defeat and started a new ranch in Indian Territory, leaving Shanghai lord of all he surveyed.


In 1875 Shanghai was married again, to Hattie James. 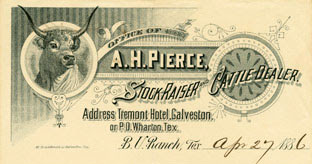 Shanghai's letterhead
Pierce got railroads built through his lands to facilitate the shipping of cattle and he built three stations, modestly naming them after himself.


Shanghai was something of a scientific rancher. In his efforts to solve the mystery of Texas fever he experimented by removing ticks and concluded that the ticks caused the fever. He toured Europe in search of a breed of cattle immune to ticks, and returned with a conviction that Brahman cattle were most likely to be tick-free, and in 1900 Brahmans were introduced to El Rancho Grande.


In the last year of his life, 1900, the Pierce holdings suffered badly from the hurricane that destroyed Galveston, from bank failure and from railroad stock. It is said that Pierce lost $1.25m. Shanghai expired from a cerebral hemorrhage, aged 66, the day after Christmas that year.


Shanghai ordered his gravesite statue long before his death so he would have time to appreciate it. He did of course beat the sculptor down in price to $2250 from $2500. It still stands today in the cemetery at Hawley, Texas as a reminder of the towering figure of the great cattleman. 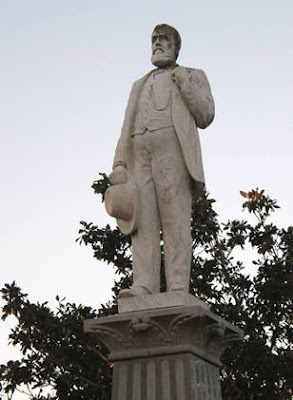 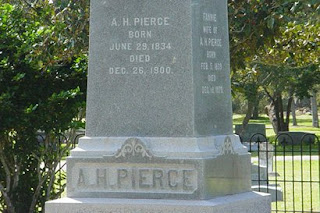 Memorial
You can read about Shanghai Pierce in Howard R Lamar’s biography of Charlie Siringo (Siringo worked for the Pierces for a time) Charlie Siringo’s West, An Interpretative Biography, University of New Mexico Press, 2005. Mari Sandoz, in her 1958 book The Cattlemen, talks surprisingly little about Pierce but is quite colorful when she does so. “Old Shang had always been a wild man,” she writes, “but since his wife and baby son died he was more than ever the lone and angry wolf, riding the range with his Winchester slung to the saddle, brooking no interference.” There is also Shanghai Pierce, A Fair Likeness by Chris Emmett, 1953. 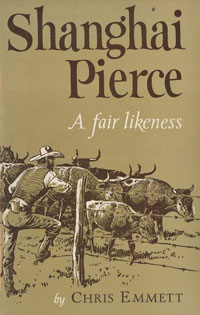 If you want to read more