The other day, when reviewing Angel and the Bad Man, the TV remake of the old John Wayne oater, I talked about the eyepatched villain of the piece played by Luke Perry. I didn’t know Mr. Perry then. Apparently he is an actor and producer, known for Beverley Hills, 90210, whatever that may be. But he has done quite a few Western TV movies and he has said, sensible chap, “I knew that I was going to do Westerns. I like ‘em.” He was one of the leads in Johnson County War, a (very) fictionalized account of that event for TV in 2002, and he also starred in A Gunfighter’s Pledge in 2008. 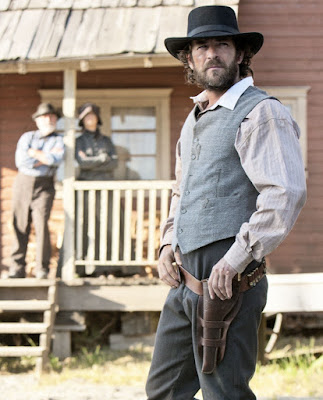 Gunslingin' judge
More recently he has starred in a series featuring one Judge John Goodnight, called Goodnight for Justice. I haven’t seen the first two of these but the third, subtitled Queen of Hearts, was on TV last night and I watched it. Perry is billed as executive producer and we read on screen that the movie was “based on characters by Luke Perry”.


The good news is that Perry got Rick(y) Schroder to be the villain in vol 3. Mr. Schroder has a good track record as a Westerner. We all remember him as young Newt in Lonesome Dove, of course. He has, er, slightly filled out since then but between then and now he did Blood River for TV in 1991, Ebenezer with Jack Palance in 1998, as well as smaller parts in various other TV oaters. Here he is Southern Colonel (he insists on being addressed as Colonel) Cyril Knox, evil gunman in a (rather ample) frock coat. 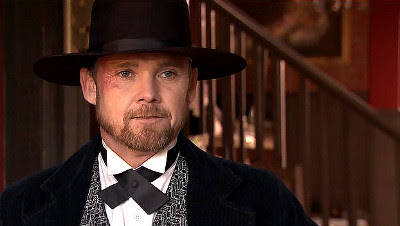 Evil Col. Ricky
The eponymous monarch is conwoman Lucy Truffaut, played by Katharine Isabelle, looking rather too 21st-century to be plausible in 1880s Wyoming but never mind. Col. Ricky is after her because she disfigured him with a broken bottle to the face, he who had survived the unpleasantness between the states and the Comanche wars without a scratch. He finally catches up with her and it seems her fate is sealed but fortunately for her there is a Pinkerton man (Ryan Robbins) in the saloon and she surrenders to him to avoid a fate worse than death or, er, death.


Col. Ricky has a gang, including an Apache tracker, and they attack the stage (a rather plush padded one) that Lucy and the Pink are on, but once again Lady Luck smiles on Lucy for Justice Goodnight happens along (he has just acquitted Butch Cassidy of horse theft) and he is very handy with a firearm and also chivalrous (he even agrees to share his bedroom with her). 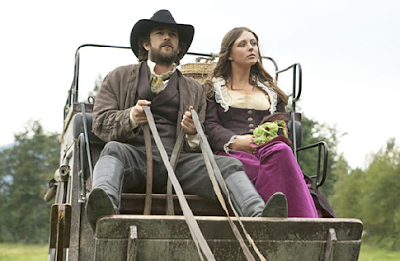 He chivalrously saves her
Well, the evil colonel doesn’t give up, of course, and there are various adventures, including a Butch & Sundance-style leap from a clifftop into the water, and the odd couple fetch up on a sternwheeler. At the end (for of course there is a showdown) Goodnight’s new double-action revolver comes in handy because it will even shoot when wet. 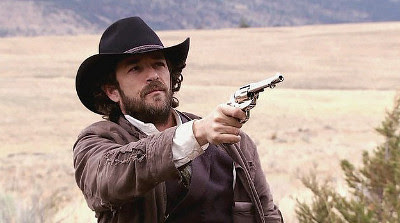 Handy
Goodnight is a colorful name but I don’t think this Goodnight is related to Charles, the cattle baron. I suppose he may be. I haven’t seen the first two episodes. But it’s time I looked at the career of rancher Goodnight in our occasional series on the cattle barons of the old West (we’ve already done Print Olive, John Chisum and Shanghai Pierce). Watch this space then.


Hallmark TV movies are OK. No worse anyway than the myriad B-movie Westerns of yore. They are ‘safe’ and risk being on the bland side but they fill a gap in the market, I guess. This one is perfectly watchable and I might seek out the others.