Only peripherally about Custer 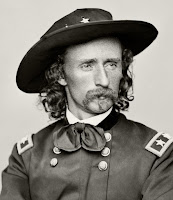 There have been oh, so many screen portrayals of General GA Custer (left). This very year Christopher Atkins plays him in a tale of Deadwood, 1876, The Hard Ride. The very first was Francis Ford, brother of John Ford, in his Custer’s Last Fight (1912). And in between we have had countless others, including Dustin Farnum, Ronald Reagan, Errol Flynn, Leslie Nielsen, Robert Shaw, Uncle Tom Cobley and all. There have been heroic and dashing Custers, half-crazed megalomaniac Custers and sometimes, frankly, rather bland and anodyne Custers. You almost get the feeling that any Western set in the 1870s feels obliged to have a Custer, or at least talk about him in the script.


One of the least plausible of all Custers, though, was Frank McGlynn Jr.’s in 1936. I do rather have a soft spot for the 1930s talkie Western serials, which were immensely popular in those far-off pre-TV days, especially with youngsters. Their cliff-hanging formula brought the kids back in the following Saturday to see if – no, how – their hero would escape the apparently certain death he was destined for at the end of the previous episode, or chapter as they were rather quaintly called. Most were produced by Poverty Row studios with minimal budgets but no one minded. They were great fun. 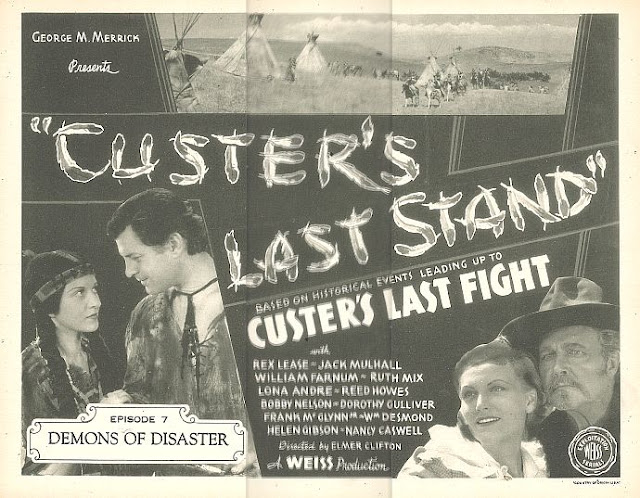 However, few would claim the status of great art, or, indeed, any historical authenticity whatsoever.


Custer’s Last Stand, which appeared in fifteen chapters in the first weeks of 1936, is immensely entertaining. But it is historical tosh. In fact, it’s really a fraud because only the last two chapters deal with Little Bighorn at all; all the rest tell a tale of one of his scouts, Kit Cardigan (Rex Lease) and how he foils the skullduggery of ‘Keen’ Blade (Reed Howes), referred to as a ‘white renegade’, and bonds with the Indians and gets the (white) girl. Of course, being historical tosh doesn’t matter. The juvenile audience may, I suppose, have believed it all but I am sure that their parents knew better and the kids themselves, when older, laughed as they recalled the preposterousness.
And there are quite a few apparently Custer movies in which the general doesn't even appear at all, like Little Big Horn or 7th Cavalry. At least we get to see Custer in this one.


Stage & Screen Productions only lasted from 1933 – 36 but they produced such memorable epics as Captured in Chinatown and The Amazing Exploits of the Clutching Hand, which doubtless thrilled the regular viewers. Custer’s Last Stand was ‘supervised by’ Louis Weiss, who also did the likes of The Cowboy and the Bandit, Pals of the Range and The Ghost Rider (these also with Rex Lease).

The director of Custer’s Last Stand was a certain Elmer Clifton (1890 – 1949), pictured left, who had acted in Westerns as early as 1914 and worked with DW Griffith in various capacities between 1913 and 1922, including appearances in The Birth of a Nation. He had then become quite a famous silent-movie director. But his career was on the wane and he had sunk to Poverty Row where he churned out cheapo flicks for quickie producers like Weiss.


As for the star Rex Lease, the IMDb bio tells us that in the 1920s “he made it into the co-star ranks of [silent movie] romantic drama, jazz-age comedy and rugged action. He made an easy transition into talking films and by the mid-'30s had become a minor league hero of dusty oaters and cliffhangers. His hero status fell aside rather quickly, however, and he soon found himself shuffled further back into the billing line, alternately playing the partner or nemesis of up-and-coming western stars Gene Autry, Roy Rogers and others. By the last two decades Rex was lucky to get any kind of billing at all. He had a durable career overall, nevertheless, appearing in well over 300 films. After a move into TV, he retired.” Rex is strapping and cheery in Custer’s Last Stand and was clearly entering into the spirit of the thing. He’s on a revenge mission, hunting down the killer of his father (played by himself in chapter one) and of course the killer turns out to be (no spoiler here) the evil Keen Blade. 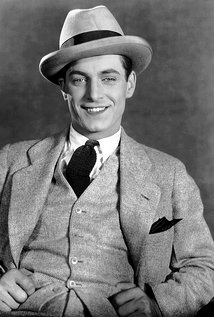 Rex in his prime
There were also some other ‘big’ stars, or anyway former big stars. William Farnum, star of the 1914 version of The Spoilers and the 1918 Riders of the Purple Sage, once paid a princely $10,000 a week at Fox, ploddingly overacts as the Indian agent Fitzpatrick. Franklyn Farnum (no relation) has a small part as a frightened Major Reno. He was another silent star who found himself well down the rankings when talkies came along. But he did huge numbers of Westerns, from The Empty Gun in 1917 to a 1961 episode of Have Gun, Will Travel. He wasn’t bad, in fact. Have a look at him as the eponymous Ghost Rider. 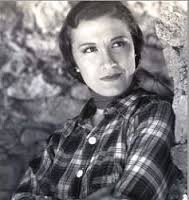 And we have Ruth Mix (right) as Mrs. Custer. Ruth was Tom Mix’s daughter but I’m afraid that she appears to have inherited few of her dad’s thespian skills (such as they were). In fact she is amazingly bad as Libby, especially in the chapter ten cliff-hanger ending when an Indian creeps up behind her with a knife and she isn’t supposed to know but you see her eyes flicker as she verifies the actor is there.


Then there’s Bobby Nelson (the screen text can’t decide whether it’s Bobby or Bobbie and alternates), then 14, who plays an orphan boy traveling with ex-Confederate Major Trent (Josef Swickard) and his peroxide-blonde daughter Barbara (Nancy Caswell). Later in the serial Bobby/Bobbie is promoted and becomes the major’s grandson. Bobby Nelson was a successful child star who was also daring and cheerful in The Ghost Rider. 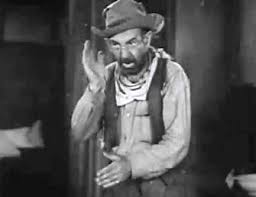 Milburn
Rex’s sidekick is the scout Buckskin played by Milburn Morante aka Moranti (above), often the comic relief in B-Westerns (or C-ones) who was often a grizzled prospector, tramp, bartender or town drunk. He’s quite entertaining. You can see him sidekicking Rex in another screen outing, Fighting Caballero in 1935. He and Bobby/Bobbie often save Kit Cardigan’s bacon in Custer’s Last Stand.


Reed Howes (below) as the chief villain, in his fancy vest, tie-down double holster and caddish mustache, was another silent era star who earned a crust through the 1930s by playing villains in talkie B-Westerns. 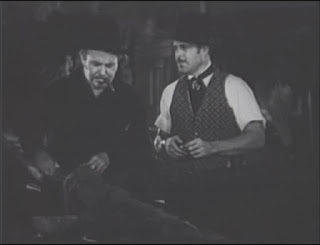 Wm Farnum as Indian agent Fitzpatrick with Reed Howes as villain Blade
Other more ‘historical’ figures who feature are Wild Bill Hickok (Allen Greer), who is the marshal in the town; Buffalo Bill (Ted Adams) in full regalia; Sitting Bull (Howling Wolf – not the blues singer one); Crazy Horse (High Eagle); and buckskin-clad Calamity Jane (Helen Gibson). In fact the majority of the cast seem to wear buckskins. Yakima Canutt has a bit part as an Indian. But the Indians are mostly played by Indians, which is good.


The intro screen text tells us that once gold was discovered in the Black Hills the government tried to prevent conflict but was unsuccessful because “the Hostile Attitude of the Indians … Left but One Alternative – WAR!” Despite this mendacious claim, most of the serial is in fact reasonably pro-Indian. There are bad Indians, of course, like the evil Young Wolf (Chief Thundercloud) who consorts with the white renegade Blade, but many of the Indians are noble and sage, or downright goody-goody like Red Fawn (Dorothy Gulliver). Unfortunately, though, they all have Ug-speak English in that caricature Indian way that was so common.


There’s some hooey about a magic medicine arrow that is inscribed with hieroglyphics that only Young Wolf and Red Fawn can read, and that tell the secret of a huge cave filled with gold. Naturally the whites, especially the evil Blade, want this arrow, and the wretched thing keeps on getting lost and found and changing hands until we are heartily sick of it.


The acting is wooden throughout and the dialogue clunky to a degree. It doesn’t detract from the entertainment value, if you can enter into the fun spirit of the serial. The visual quality of today’s print is, though, rather the worse for wear. It often jumps and the picture is faded and the sound poor. 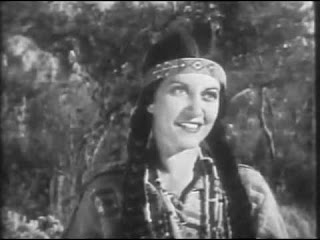 Red Fawn is a goody Indian, so played by a white
The first episode is longer, a sort of pilot, I suppose, and the others come in at about twenty minutes each, though about fifteen once all the repeated titles and credits are discounted. There is a soundtrack of cheery cavalry tunes, especially Gary Owen.


The usual budget-busting tricks are evident, such as stock footage from other pictures. A lot is speeded up, such as when Kit saves a gal from falling beneath a herd of charging buffalo. There are a few stunts (Yak Canutt probably did those) and you can often see Rex’s stunt double deliberately keeping his Stetson over his face so as not to be recognized as he vaults onto a horse.


As Kit gets on the trail of the varmints who shot his pa the action hots up. He fights a duel over the desk of Blade’s tame crooked Judge Hooker (Walter James) and though we do not see the mortal shot (doubtless out of respect for the tender age of most of the audience) we see Kit emerge from the room with smoking gun so the judge evidently lost. 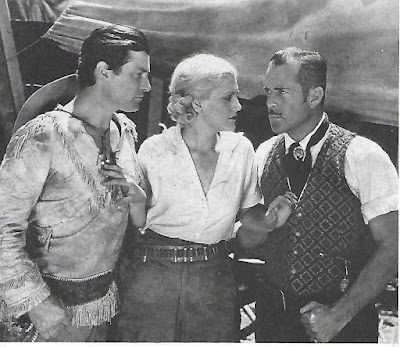 Hero Rex, his intended Nancy and villain Reed
The last two episodes are devoted to Custer’s last fight. Heretofore the general has only been peripheral to the plot with occasional appearances (in long hair and buckskins, natch). But now he rides out from Fort Henry (not Lincoln) to the strains of Gary Owen and is bravely annihilated. Of course he is the last to fall (he usually was in movies). There’s much confused whooping and shooting. Indian agent Fitzpatrick bears the news to the (now) Widow Custer, then bids a tearful farewell to Kit, who is off down south with Barbara Trent - oddly, really, because, how can I say this without appearing ungallant?, Barbara is far from the prettiest actress on the set, in fact she’s… But nay. Let me just suggest that he would have been better off with Red Fawn.


The bad Indian Young Wolf poetically falls on the magic arrow, ensuring his journey to meet the Great Spirit in the Happy Hunting Grounds (we are told) and leaving the arrow in the safe hands of goody Red Fawn who keeps the secret safe from the marauding greedy white men. 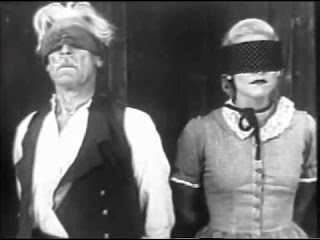 Don't worry, a goody has taken the bullets out of the firing squad's rifles
Kit gets his orders discharging him from the army and Buckskin wittily opines that them won’t be the last orders he obeys (now that he is getting married, you see). The End.