This TV movie is a remake of John Wayne’s Republic picture of 1947, Angel and the Badman. And it’s actually quite a faithful remake. Differences in characters and script are small; for example, the single Quaker girl Penelope has been replaced by a widow, Temperance (Canadian Deborah Kara Unger), with a son. The movie seems to have had the Wayne family imprimatur, for Brendan Wayne, one of Duke’s grandsons, takes a part. 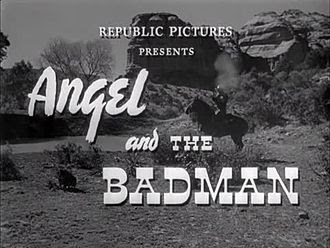 The rather charming original
For me, a difference is also in the titles. The badman of the original has become a bad man in this one. That may seem splitting hairs but you know the Western idea of badman is a staple of the genre, and always has been. A badman is a good-bad man, one who may have crossed paths with the law but is actually knightly and true. Wayne himself did a good line in badmen – like his Ringo Kid in Stagecoach, a convict who is in fact the most decent and bravest man aboard. A bad man is, well, just a rotten egg. 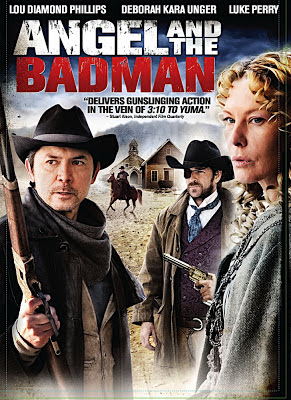 On the DVD cover at least it's written as one word
Not that Lou Diamond Phillips in this new version is a rotter. In fact he is a classic gunslinger who comes round to a more peaceful and legal way of doing things. Maybe the movie makers (Nasser Group) and writer (Jack Nasser) just weren’t aware of the difference. 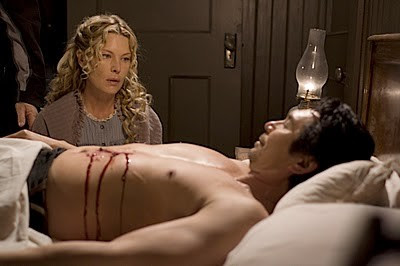 She nurses him back to health
I think the Nassers are Canadian. At any rate, like a later Nasser effort, Dawn Rider (another remake of an early Wayne oater) it was shot in British Columbia. Somewhere pretty chilly, I think, because you can see the breath of the actors when they speak, even indoors. It’s pretty terrain, though, and counts as a plus for the movie.


The director was Terry Ingram, who along with a large team won a Canadian Directors Guild award for another picture, but I know little about him (I think it’s a him). It’s his only Western but he acquits himself honorably. 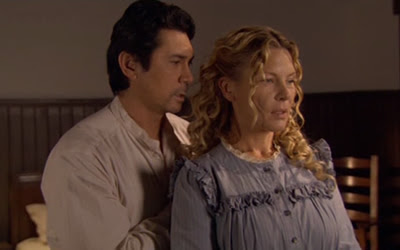 It's lerve
It was shown on Hallmark so is, you know, family-friendly. Don’t expect too much violence and there’s no bad language or sex. But that doesn’t mean it’s bland. It does have its moments.


The original was a rather charming film, which Wayne himself produced. It was written and directed by Wayne buddy James Edward Grant, with Wayne buddy Yakima Canutt as second unit director and Wayne buddy Archie Stout at the camera. Wayne handled the role of Quirt Evans, a gunman who falls for the Quaker who nurses him after a gunshot wound, with real skill, and because it was Duke, somehow the ‘softening’ was more obvious. Mr. Phillips isn’t Wayne, of course, and he starts with a lesser stature. But he isn’t bad. He is pretty tough in the original gunfight in the opening scene, in which he dispatches three bad guys (not badmen) though receiving a hole in his Waynian cavalry shirt. And he manages the lovey-dovey stuff with some skill too. At 47 he was older than Wayne in the original. Duke was 40. Perhaps that’s why they changed a young girl to a widow. 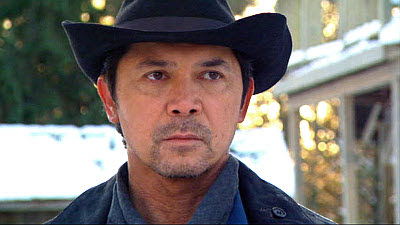 Not Wayne - but OK
The original JE Grant story (which is not credited in the remake) had quite an interesting aspect as the hardened gunfighter first greets the Quaker idea that “only the doer is harmed by the evil act” with some cynical skepticism, even mockery, but gradually comes round to it and is, in fact, redeemed by the philosophy. The good woman redeeming the badman is of course a standard trope of the Western, right back to the silent days. William S Hart specialized in it – as did an actor in the 1947 Angel, Harry Carey Sr.


In common with most films that feature Quakers, the writer of this one goes for thees and thous in the script but doesn’t know the difference, using mostly thee even when it’s subjective. It sounds pretty silly.


I liked the villain Laredo, curiously billed as Loredo (Luke Perry, Wayne buddy Bruce Cabot in the original) in his first scene, in a dark and smoky saloon. His large eyepatch looked excellent. Funny how villainous an eyepatch makes a chap look. Must be why pirates wore them so much. Sadly, though, once he appeared in the daylight he wasn’t quite so convincing. In these TV movies everyone seems obviously to be wearing costumes. They never quite convince, somehow, as, well, clothes. 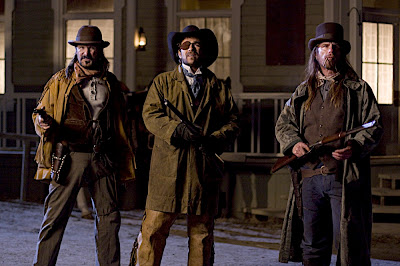 The bad men (not badmen)
Brendan Wayne is Randy, a pal of Quirt’s, in quite a small part but well handled.


Unfortunately, though, the part of the marshal, Wayne mentor Harry Carey Sr. in the original, has been almost written out, certainly reduced, and that is a disappointment. Still, fair dos, Winston Reckert, another Canadian, does a good job with the limited lines he has, projecting some character into the part. 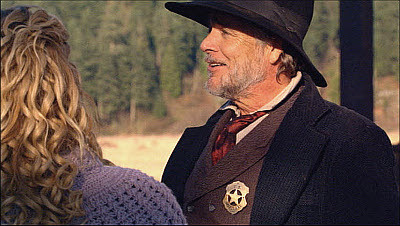 
There’s another 3:1 showdown in the last reel (if TV movies have reels) but this time of course Quirt does not puncture his shirt and instead he and Temperance go off to Oregon.


All in all Angel and the Bad Man is quite well done. These TV remakes of old Westerns never quite do it somehow but some are worthy efforts.  You could watch this one.