Red River was the only Western in which Howard Hawks matched the artistry of John Ford. It is a mighty film. One thinks of Ford while watching it not only because Hawks elicited a stunning performance from John Wayne but also because of the epic grandeur of the movie, the noble themes and the fact that each shot is framed as a work of art. 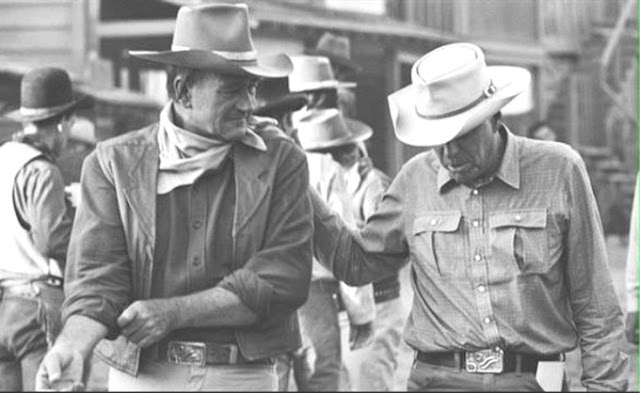 John Wayne and Howard Hawks, mutual admirers
Ford does seem to have had some input to Red River. Tag Gallagher, in his book John Ford: The Man and his Films (University of California Press, 1984), suggests that Ford assisted Hawks on the set and made numerous editing suggestions, including the use of a narrator. It may have been so. Certainly Ford wrote to Hawks asking him to “take care of my boy Duke”. Hawks did say that he often thought of Ford when shooting, particularly in a burial scene when ominous clouds started to gather. Hawks later told Ford, "Hey, I've got one almost as good as you can do - you better go and see it." 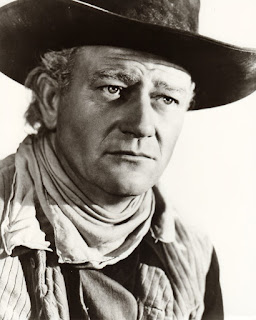 It made Wayne a major star. The Big Trail (1930) for Raoul Walsh and Stagecoach (1939) for Ford had both turned out to be false starts as far as ‘A’ Westerns were concerned. It was really Hawks who made John Wayne into the cowboy megastar he became. Red River was filmed in 1946, i.e. well before Ford’s cavalry trilogy, though it did not come out until 1948 for various reasons. Hawks wanted endless editing and there was also an absurd claim by Howard Hughes that the picture was similar to The Outlaw (it was nothing like it; for one thing, Red River was good). If anything, the plot was a Western Mutiny on the Bounty, as writer Borden Chase admitted. In any case, the picture wasn’t released until August 1948, after John Ford’s Fort Apache. 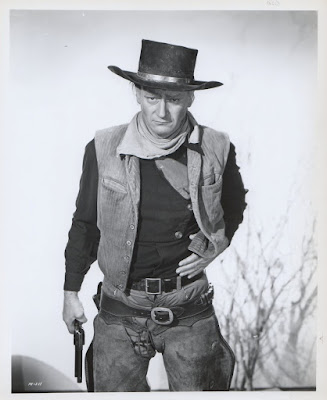 Wayne must have hesitated to take the part of Thomas Dunson. To play a much older man (he was 39 then) losing his grip, with no female partner (Joanne Dru’s Tess was destined for Montgomery Clift as Garth) wasn’t an obvious step for him. But it was a great part and Wayne carried it off supremely well. After seeing Wayne's performance in the film, John Ford is quoted as saying, "I never knew the big son of a bitch could act" – which was a bit rich after Stagecoach, in which Wayne had pretty well outshone all the rest of the cast. Wayne would also play an older man for Ford, in She Wore a Yellow Ribbon in 1949, and would do that part too with great skill.


Red River, Fort Apache, She Wore a Yellow Ribbon and Rio Grande, some of the best Westerns ever made, were all released in the space of three years (1948 - 50) and Wayne was superb in all of them.

In a 1974 interview, Hawks said that he originally offered the role of Thomas Dunson to Gary Cooper but Coop declined it because he didn't believe the ruthless nature of Dunson's character would have suited his screen image. Interesting idea, though. 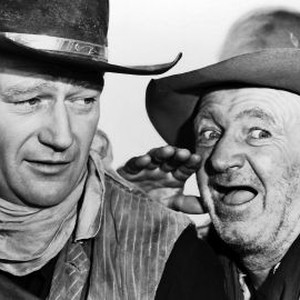 Hawks seems to have borrowed a good number of other Ford stock company members as well as Wayne because Walter Brennan, Harry Carey Sr. and Jr. (this was the only film in which father and son both appeared, although they have no scenes together), Paul Fix, Hank Worden and others are all on the cattle drive as they make their weary way through fine Western locations (Arizona, mostly) to the studio sound stages where they camp each night.

Brennan as Wayne’s sidekick and crusty cook Groot, Noah Beery Jr. as decent cowhand Buster and John Ireland as Cherry Valance, the leering gunman rival to Montgomery Clift’s Garth, are all particularly good (amazingly, even Cary Grant was considered for Valance). Joanne Dru (soon to be Mrs. Ireland and also to star in Yellow Ribbon for Ford, as well as Wagonmaster) is pretty but you get the impression that her part has been artificially grafted onto the story for some love interest. That sometimes happened with Hawks (and Ford too).


Monty Clift in his debut is excellent as the adopted son of the Bligh-like Dunson who finally rebels, in a Fletcher Christian way, takes over the herd and sets Dunson adrift. He is small and sinewy, not at all like the beefy Wayne (how to make the final fistfight convincing was a real problem for Hawks, who evened the odds by having the gunman Cherry wound Dunson just before the fisticuffs), yet he conveys power and even a growing authority. Wayne and Brennan didn’t care for Clift, who was left-wing and a homosexual. In an interview with Life magazine, John Wayne described Clift as "an arrogant little bastard". He would have preferred Burt Lancaster for the Clift part but Lancaster turned down the role to star in The Killers. Still, though they shunned Clift socially, Wayne and Brennan worked professionally enough with him. 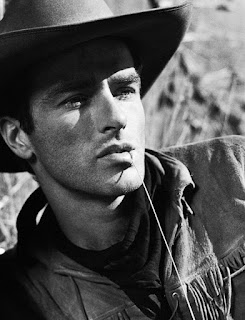 Great debut, and he knew it
And among the bit parts you can spot Glenn Strange the Great as a cowboy and Shelley Winters as a dance hall girl.

The tension builds and builds towards the final reckoning that we know must come. The plot came from The Chisholm Trail, a story by Borden Chase in The Saturday Evening Post, though Hawks made many changes, often while shooting.

Hawks was perhaps attracted to it because of the male triangle at its heart. Garry Wills, in his biography of Duke, John Wayne, The Politics of Celebrity (Simon & Schuster, New York, 1997), makes the point that all Hawks’s Westerns had this trio. In The Outlaw, Doc Holliday (Walter Huston) and Pat Garrett (Thomas Mitchell) were rivals for the affections of Billy the Kid (Jack Buetel). In Rio Bravo you have John Wayne as the sheriff, Dean Martin as the alcoholic deputy and Ricky Nelson as the pretty-boy gunman Colorado. In El Dorado, Robert Mitchum takes the drunk lawman part while James Caan becomes the younger man, Mississippi (though hardly a gunman in this case). The male trio is usually complemented and hovered over by a cranky old mother-hen figure: Walter Brennan in Red River and Rio Bravo, Arthur Hunnicutt in The Big Sky and El Dorado. In Red River, of course, you have Dunson, Matt and Cherry (Wayne, Clift, Ireland) with Brennan as the mother-hen. 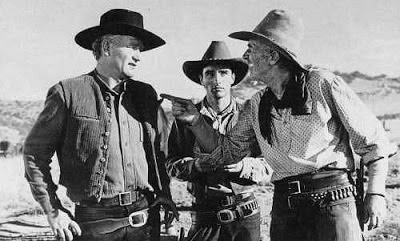 You don’t have to have read much Freud to smile at the scene in which Cherry Valance and Matt Garth exchange guns and have a shooting match.


Cherry: That’s a good-looking gun you were about to use back there. Can I see it? (They swap guns) Maybe you’d like to see mine. (Cherry examines Matt’s pistol). Nice, awful nice. You know there are only two things more beautiful than a good gun. A Swiss watch or a woman from anywhere. You ever had a good Swiss watch? 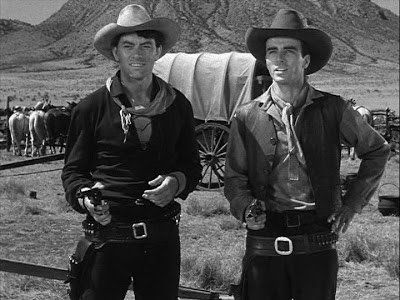 Only the showdown at the end comes over as a compromise. It’s marvelous as Wayne walks, blazing with anger, through the cattle and disposes of the top gun with a dismissive shot. Here comes the clash with Clift! But in no time at all Dru, in a rather silly speech, has Dunson and Clift making up and it all peters out. Dunson has been so driven, so indomitable, that almost no ending would have worked, except perhaps his death. The same is true of The Searchers when Wayne’s film-long fury dissipates in a short scene and he takes Debbie ‘home’. He should really have died, as in the book. It is said that Hawks himself scripted Dru's speech, in a fit of pique against John Ireland (Hawks was, it is alleged, a rival for the favors of Ms. Dru). Clift's character was to have shot Dunson fatally, then faced a showdown with the gunman played by Ireland. Dramatically, that was necessary as the two young guns had been locking horns, more or less playfully, throughout the story. But it was fudged. 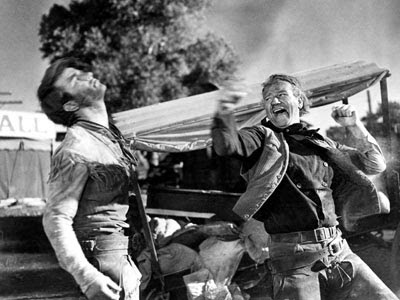 In a way, the male triangle resolves itself at the end, with Cherry out of the way, into a familial/generational one, with grandfather Brennan, father Wayne and son Clift. Garry Wills even talks about them as Laertes, Odysseus and Telemachus but I think we’re getting a bit hi-falutin’ here. It’s only a Western, after all. Hawks himself had no time for over-intellectualizing his films. He made straightforward pictures with a good story.

Red River is an unusually long film for the time (125 minutes) and Wayne thought it too long, but it never drags. Throughout, it is dusty and smells of cattle. It’s a huge picture with thousands of head of steers and a half-million dollar budget which grew to $3.2m. Scenes like the beeves going down the main street of ‘Abilene’ are still impressive today. See it on the big screen if possible. Early in the story
The picture made the investment back, though. It was 1948's third-highest grossing film at $4.15m. Only Road to Rio and Easter Parade made more.

The music (Dimitri Tiomkin) is powerful and memorable. Western buffs will sing “My rifle, pony and me” to the theme tune, Settle Down, because they will be Rio Bravo fans – and Settle Down was later adapted by Tiomkin for use there. Not that other Hawks Westerns, Rio this or Rio that, were a patch on this great work.

The greatness of the film is also largely down to Russell Harlan because the black & white photography is simply stunning – not only the famous 360° shot at the start but throughout. Hawks had wanted the super-talented Gregg Toland, and Harlan had really been confined to B-Westerns previously (Hopalong Cassidy flicks and the like), but Hawks and Harlan worked outstandingly well together and made a visually great picture. 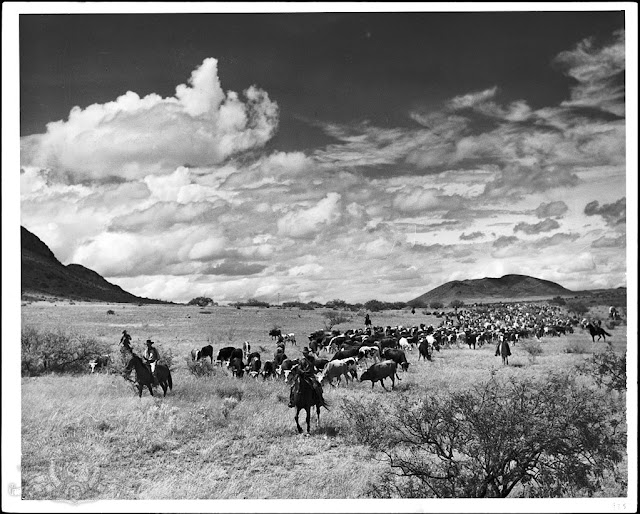 The importance of Red River as a Western can be judged by the number of times it is mentioned in reviews of other films (and links on this blog) and used as a comparison. It is a touchstone.

It’s curious in a way that Hawks made it at all. It was his attempt, a risky one, to become an independent producer but why choose a Western? He was much better known for slick, urbane movies with clever dialogue. But he did have some Western track (or trail) record. He had started as production manager and editor on 1920s silent Westerns for Paramount, been fired as director from Viva Villa! in 1934, had helmed the semi-Western Barbary Coast in 1935 and he had contributed to the dreadful The Outlaw earlier in the decade but was fired by Howard Hughes after two weeks. He was hardly a Western expert. But Red River made him one. 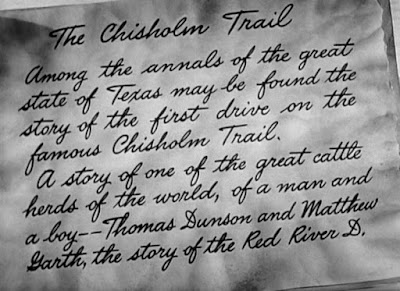 Hawks never again did anything as good, certainly not a Western anyway (you might like Gentlemen Prefer Blondes). His four later Westerns, The Big Sky (1952) with Kirk Douglas and those three commercial ‘bankers’ with Wayne, had nothing like the artistic merit or scope. Red River remains one of the top ten best Westerns in the history of the genre, one of Wayne’s very greatest portrayals and it is unchallenged as the finest cattle-drive movie ever. 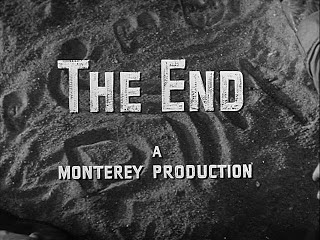