The best screen Tom Horn - and the best Al Sieber

Alan Bridger, a follower of this blog, read my plea about the TV movie Mr. Horn and how difficult it was to obtain, and thanks to his great generosity and kindness I have finally been able to view it. I am really glad I did because it is very good, and a worthy addition to screen Tom Horns – and screen portrayals of Al Sieber. In fact, judging by the first part anyway (it was a two-parter, designed to fit in to a total of three hours with commercials) the movie could just as well have been titled Mr. Sieber. A grizzled Richard Widmark does an excellent job as Al and in the story of the Apache wars it is he who dominates. Tom Horn (David Carradine, also first class) is Al’s young apprentice. 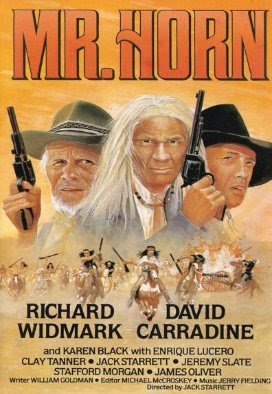 A TV movie, but the best Tom Horn there is
The Warner Brothers Tom Horn of 1980 with Steve McQueen concentrates only on the last part of Horn’s life, in Wyoming, and the trial for the murder of the lad Willie Nickell. Mr. Horn, on the other hand devotes about half the picture to the time in Arizona with Sieber and the other half to the Wyoming saga. It misses out the whole middle part of Tom’s career, as (allegedly) hired gun in the Pleasant Valley range war, as a Pinkerton man and as a soldier in the Spanish-American War. Well, fair enough, they can’t do everything. At least we get a good account of the Apache struggle and a good showing for Al Sieber. That alone makes the film worth it.


Mr. Horn opens with some evocative paintings of Western scenes by Petko Kadiev under the titles. The director is announced as Jack Starrett. Big and burly Mr. Starrett (1936-89) was a former actor who made a rep as director of low-budget drive-in movies and TV shows like Starsky & Hutch, The A-Team and The Dukes of Hazzard. Westernwise, he had only directed one, the Jody McCrea oater Cry Blood, Apache (1970) which was poppa Joel McCrea’s penultimate outing in the saddle, and I fear it wasn’t very good. So the omens weren’t all that promising when Starrett’s name appeared on the screen. Never fear, though: he does an excellent job on Mr. Horn. The picture is thoughtful and well-paced, and also visually attractive with Mexicali, Baja California locations standing in for 1880s Sonora and Arizona, shot by Jorge Stahl Jr., who had worked on The Treasure of the Sierra Madre and Garden of Evil (the latter, especially, a photographically very classy picture). 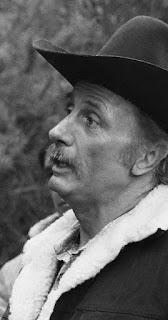 Jack Starrett
A limping Al Sieber, cantankerous and worldly-wise, with Widmark at his growliest, is a civilian Army scout with a low opinion of officers, whom he calls jackasses. Actually, although Sieber was wounded in the leg at Gettysburg, there is no evidence that he hobbled as a result in later life. He did limp after the Apache Kid incident in 1887, but this picture even has him on crutches at one point. Never mind, it adds color. Widmark plays Al with no German accent, probably a wise choice, though Sieber never really mastered English and always spoke in a heavily accented way. Tom Horn, though, is “the talking boy” who speaks Spanish and Apache fluently and acts as interpreter. 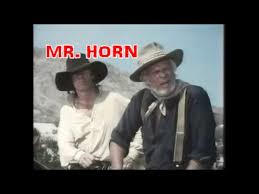 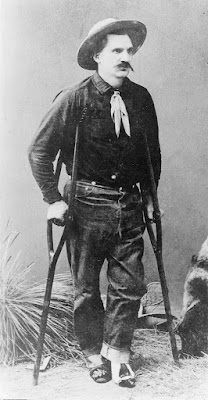 Al Sieber after the Apache Kid incident
At one point Sieber asks Horn why no one likes him. It’s a telling moment. Horn says that he doesn’t know, but no one has ever liked him.

General Crook charges Al with bringing in Geronimo, which Sieber says is impossible to do. Director Starrett himself takes the role of Crook, and rather well, too. Crook was a great figure, with his bushy beard and riding his favorite mule, and a fine soldier, very different from the politically ambitious Nelson A Miles (Stafford Morgan) who replaces him, and whom Sieber cannot stand (especially when, later, Miles fires all the scouts, including Al and Tom). But first Sieber and Horn set out after Geronimo with Al cheerfully listing all the Apache leaders he and the cavalry have previously failed to capture. 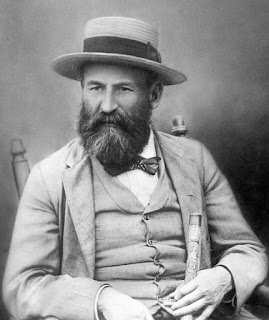 General George Crook (1830 - 90)
Ambushes follow and mucho action, in which Horn learns the hard way how to fight Indians. The expedition is led by Capt. Emmet Crawford (Jeremy Slate) and Crawford too was a fascinating figure. He was a Civil War hero who gained Western experience in the Sioux wars under Crook in Montana and came south with the general when the 3rd Cavalry was transferred to Arizona to deal with the Apache, where he was appointed military commandant at San Carlos. He and Crook believed in using civilian scouts, especially Apache ones, men who knew the land and knew the people, a policy Miles was to reverse when he assumed command. 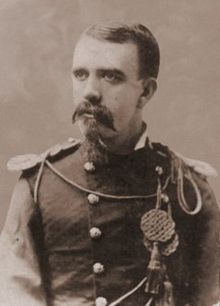 Capt. Emmet Crawford (1844 - 86)
In spring 1885 Crawford was sent out after Geronimo and took Tom Horn and Apache scouts with him (though not Al Sieber, as in Mr. Horn). In Mexico his party was attacked by Mexican regulars and when Crawford waved a white handkerchief and tried to negotiate he was shot in the head. An Apache scout called Dutchy (it is Horn in the movie) dragged Crawford to safety but the captain was mortally wounded and died later. Crawford’s second-in-command, Lt. Maus, did arrange a meeting between Crook and Geronimo and the Apache chief agreed to return to San Carlos but in fact he did not return. Crook resigned over the incident and was replaced by Miles.


Now relieved of their duties, Sieber and Horn go prospecting (in fact Sieber was a lifelong, if unsuccessful miner) where they are visited by Ernestina, the late Crawford’s sister (Karen Black), and the movie invents a romance between her and Horn. This Ernestina says her father and brother were both soldiers and both were killed. “All I want from a man is that he outlive me,” she rather poignantly tells Tom. Then Horn and Sieber are recalled when Miles’s campaign also fails. They must hunt Geronimo again. There is another long pursuit, well handled by director and cast, in which Al is shot again, making his bad leg now the good one, as he says. He is obliged to return home.


The movie has Horn give his personal word to Geronimo that if the Apaches surrender they will be allowed to remain in Arizona, but once at Fort Bowie, Miles scorns this and exiles all the Apaches, including the scouts who had helped track Geronimo, to Florida, with Sieber raging at the injustice and Horn silently fuming. “I’m done being used,” he mutters.


Geronimo is played by Enrique Lucero (who was in both The Magnificent Seven and The Wild Bunch) and he does rather resemble the photographs of the older Apache (Geronimo was probably 56 at the time). 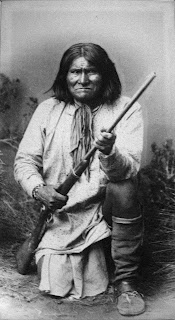 The real Geronimo, Goyaałé (1829 - 1909)
OK, yes, this all does rather monkey about with historical fact, but I don’t think we should blame the film for that too much. These movies are dramas, not documentaries, and if the dramatic tension requires it, why not alter history a bit? If you want the true facts, read a history book, don’t watch a Western. And in my view the picture does capture the spirit of Tom Horn and Al Sieber, and rather well too.


One of the many fades-to-black that indicate a TV movie is more consequential, and now we see an older Horn, duded up in suit and tie and come north to Wyoming, and we see a horseless carriage to denote that time has passed and modern times are here, reminding us of The Shootist or Peckinpah pictures like Ride the High Country, The Ballad of Cable Hogue and The Wild Bunch. In Cheyenne, who is it the rather down-at-heel hotelier Tom comes across? Why, it’s Ernestina Crawford, now a widow as she hastily informs him. And drinking in the bar is a disillusioned George Crook. An even more elderly Al Sieber will soon re-appear too, and be present at Horn’s trial and execution. There is, I fear, no evidence for all these re-appearances (and in fact Crook had died a dozen years before) but they do provide useful dramatic continuity. 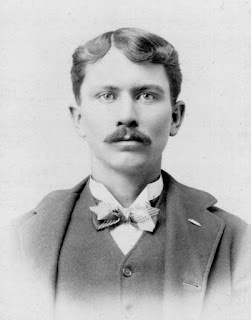 Tom Horn (1860 - 1903)
Horn is hired by the rich cattlemen under John Noble (Pat McCormick) who is presumably a reference to cattleman John C Coble who would later jointly author Horn’s autobiography, to stop the rife rustling. First Horn tries to do it legally but the courts immediately dismiss the cases he brings against the rustlers and so he turns to the gun. Noble is clear: though he will always deny hiring Horn as a bounty hunter, that is in reality what the job is. Kill rustlers to dissuade others. Horn is no sham. He tells how Buffalo Bill once asked him to join the Wild West and do his act. “My act?” Horn replied, incredulously. “My act? It ain’t an act!”


We see the death of the farm boy Willie Nickell but we don’t see who made the shot. The scoundrel Joe LeFors (John Durren) gets Tom drunk and then we see Tom arrested – we do not hear his ‘confession’. The trial, illustrated by a Harper’s Weekly artist in a wheelchair, goes badly and one evening Ernestina brings a steel file to Tom’s jail cell. She tells him that both the rustlers and the cattlemen want him dead. Next day, LeFors tells the court of his conversation with Horn which has been transcribed by a stenographer in the next room. An elderly Sieber as a character witness is passionate but rambling and ineffective. Horn is found guilty and sentenced to death. Carradine as Horn
Horn escapes over the rooftops (rather athletically, and it’s Carradine, not a double) but realizes it’s hopeless and surrenders. The last scene is the hanging, with the cattlemen holding drinks looking on in a satisfied way.


It’s all well done, and Carradine is outstanding (he always was). In fact I would go so far as to say that Mr. Horn is the best screen Tom Horn there is, and, much as I like John McIntire in Apache and Robert Duvall in Geronimo: An American Legend, it is also the best portrayal of Al Sieber. Do see it if you get the chance.


Thanks, Alan Bridger. Any relation to Jim? 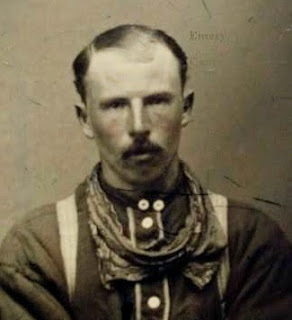 Horn soon before his death