Not the greatest Ford Western but still classy

John Ford made over thirty silent Westerns for Universal in the 1910s (few of which, sadly, survive) and he became known for them. When he went to Fox in 1920 his first picture there was also a Western, Just Pals with Buck Jones. He followed up with other Buck Jones, Hoot Gibson and Harry Carey oaters in the early 20s and of course had a triumph with Fox’s Western epic to rival Paramount’s 1923 The Covered Wagon, The Iron Horse in 1924. But then there was a pause. 3 Bad Men was the last Western of Ford’s Fox contract and the director wouldn’t return to the genre till Stagecoach in 1939. 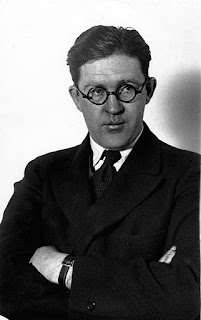 John Ford in the early 1920s
Fox made quite a ballyhoo about 3 Bad Men – “John Ford’s Successor to ‘The Iron Horse’ Looms as One of the Biggest Hits on Film Horizon” – but it must be said at the outset that it is certainly did not have the epic scale of The Iron Horse, despite a 92-minute runtime, some impressive location shooting and a huge land-rush scene. William S Hart had treated the theme the year before in Tumbleweeds, released by United Artists, though Ford's work is superior. 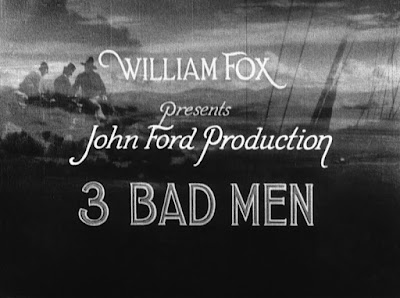 Nice title screen
The idea of a trio of ‘bad’ men who turn out to be noble was far from new, and Ford himself used it several times. As a young man in 1915 he had appeared in 3 Bad Men and a Girl, directed by his brother Francis Ford (a picture now lost); Jack Ford himself directed Marked Men with the same theme, also with J Farrell MacDonald and with Harry Carey Sr. in 1919; and of course John Wayne and Harry Carey Jr. would appear in 3 Godfathers in 1948. 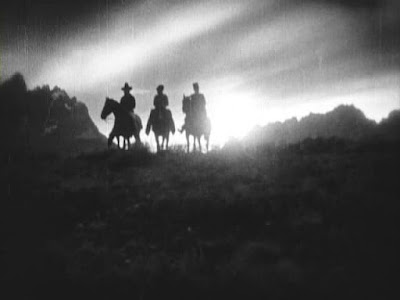 Some really classy Schneiderman photography
Of the titular baddies, J Farrell MacDonald as Mike Costigan seems to dominate, perhaps because he was so prominent in The Iron Horse as the comic-relief railroad worker, a similarity underlined by the appearance of George O’Brien as nominal star of 3 Bad Men – though O’Brien did not have the biggest part and was not a 'bad man'. The real leader of the triumvirate is ‘Bull’ Stanley, played by Tom Santschi, a leading man who occasionally wrote his own roles and often played a villain. He appeared in dozens of Westerns from 1909 on, making it through to the talkie era in the 30s. The third member of the small band is the disreputable top-hatted gambler ‘Spade’ Allen (Frank Campeau, reliable Western villain for a quarter of a century). He ties his top hat down when galloping in a way that Ward Bond must have seen before The Searchers. 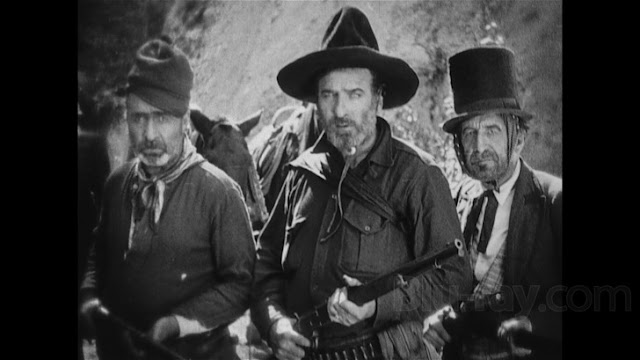 The three
The three plan to rob a man of his racehorses but are beaten to it by the gang of the crooked and smarmy Sheriff Layne Hunter (Lou Tellegen, in his only Western, a famously handsome man but who is so slathered with make-up in this picture as to be ridiculous). In the robbery the racehorse owner is killed and the three bad men suddenly become the protectors of the man’s daughter, Lee (Olive Borden, considered one of the most beautiful actresses of the silent era, earning a massive $1500 a week at Fox). The men will eventually give their lives to save her, spoiler alert, oops, too late. 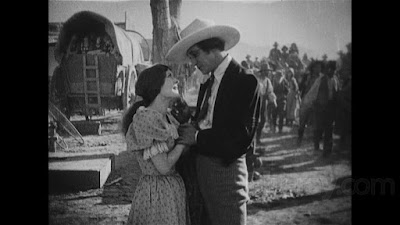 The heroine is courted by the villainous sheriff
Curiously uncredited is the sheriff’s chief henchman, who uses a sawn-off carbine, for this is clearly Vester Pegg, chief villain in many a Ford Western, including Straight Shooting and Bucking Broadway. 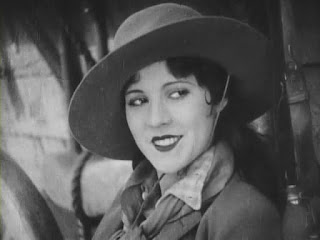 Classic 20s beauty
The backdrop to the story is a fictional 1877 land rush into the goldfields of the Black Hills, very reminiscent of the (real) Oklahoma Land Rush of 1889. The movie land-rushes always seem to be hymns to the passion of greed, as the settlers race (one couple even forget their baby) to beat each other to the best land. And of course no reference is made to the current or previous residents of the territory: it is ‘virgin’ land which the white settlers have a right to. Hollywood Westerns liked land rushes because they gave great scope for huge scenes and hosts of extras. There are always spills and wagon crashes and, for some reason there is always a penny-farthing bicycle, and Ford follows suit. And of course there are always ‘sooners’, low-lifes who try to beat the gun by sneaking into the lands concerned the night before. In this one, Sheriff Hunter (obviously) leads those. 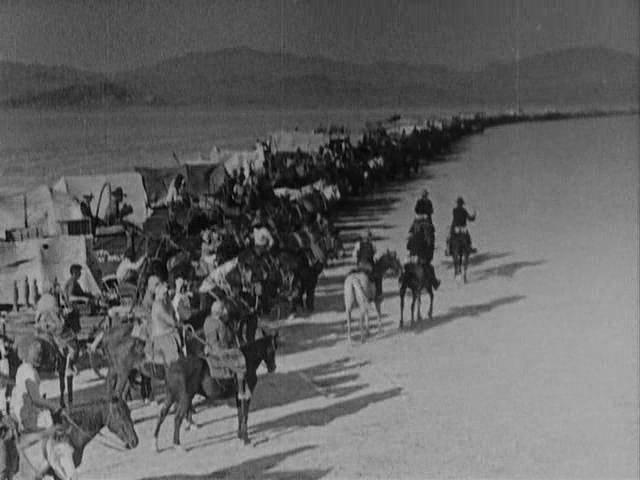 Impressive
There’s a sub-plot about Bull’s sister Millie (Priscilla Bonner, soon to marry a prominent physician and retire from the movie business), seduced then abandoned by Hunter, and of course it will finally be Bull who does in the villainous sheriff.


The story was apparently “suggested by” a novel by Herman Whittaker, Over the Border. It is not, I fear, all that original and though there are some very good moments in 3 Bad Men, I wouldn’t put it at the very top of Ford’s Western work. 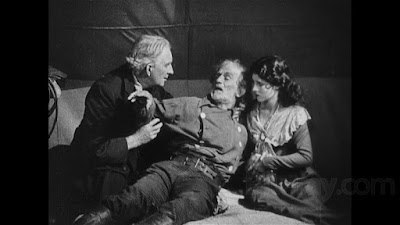 Almost an old-master religious death scene
The picture opens with a typical Fordian nod to American immigrants, whom he tellingly describes as emigrants, seeing it from the Irish perspective. Of course in Ford movies again and again it is the immigrants and society’s marginals who are the goodies, while the ‘respectable’ folk, in this case the lawman and his cronies, are the hypocritical bad guys or at best weak. There’s a rascally and cowardly newspaper editor (Otis Harlan) and a rather pathetic minister (Alec B Francis). 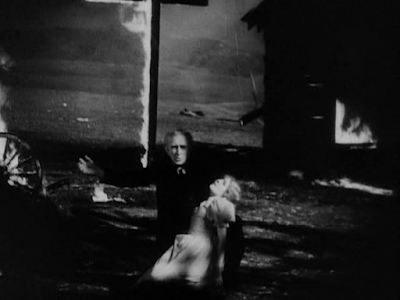 Sometimes overdone. A bit like Hart's Hell's Hinges.
Also typical of Ford are lovely landscape shots and numerous beautifully-framed views. There’s one long shot of a huge wagon train that knocks spots off anything James Cruze did in The Covered Wagon. There are too some fine close-ups and effective shots of the three bad men into the sun. Ford’s cinematographer was once again George Schneiderman, one of the silent-movie greats, who worked with Ford a lot, notably on Just Pals and The Iron Horse, and the Jackson Hole, Mojave Desert and Lone Pine locations are splendid. Ford’s assistant director, as on The Iron Horse, was his ‘other’ brother, Eddie (Edward O’Fearna). They fought like cats and dogs; they always did. But they were family. 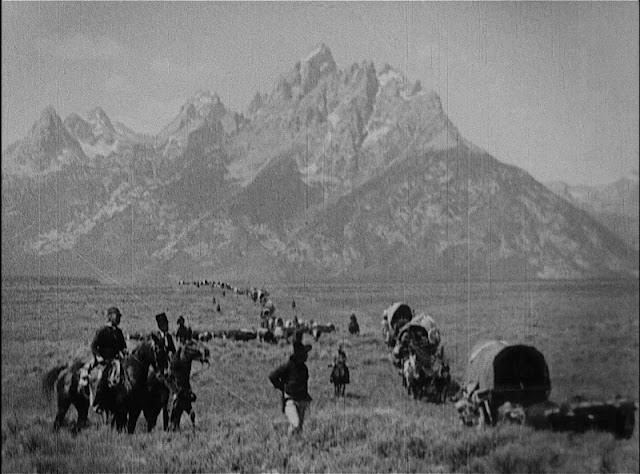 Fine shot foreshadows Wagonmaster
The three bad men rally the members of the camp and form a large posse to save the girl, and this night shot with the riders carrying burning torches, is powerful, almost The Birth of a Nation-ish (Ford claimed to have been one of the hooded riders on Birth of a Nation, but then he claimed a lot of things).


The acting only rarely spills over into the laughably melodramatic. All of Ford’s silent Westerns that we can still see have a relatively restrained acting style for the day. 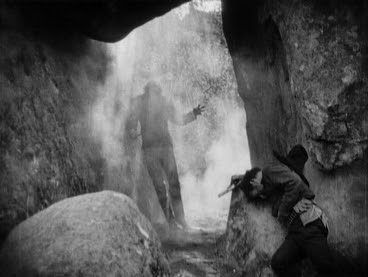 The death of the villain
The print quality of the current film is very good. It exists in Blu-Ray and is also available on YouTube. I thought the music on the present-day print (recorded 2007) especially good. It is by Dana Kaproff.


The happy ending rings a false note when the now happily-married O’Brien and Borden discover their baby, to whom they have given the names of all three of the bad men, playing with a revolver, and they both laugh heartily at this amusing mischief.


Not the world’s greatest Western but certainly worth a look if you are interested in the genre, and if you aren’t, why are reading this blog? I mean, come on, dude. 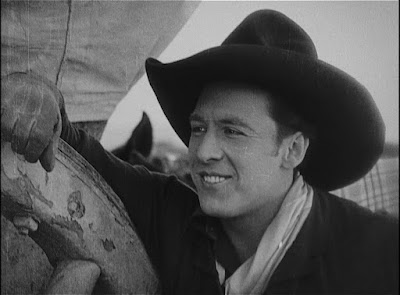 O'Brien has a surprisingly small part