Since The Searchers, John Ford had been, frankly, churning out Westerns because that was what he did and he needed big money to keep his adored but aging yacht, the Araner, afloat. But the pictures were not a patch on The Searchers, not even in the same league. The Horse Soldiers was a run-of-the-mill actioner of uneven quality, Sergeant Rutledge dealt with important themes but Ford seemed to have lost interest, and Ford himself said that Two Rode Together was “the biggest load of crap I ever did.” But he did care about The Man Who Shot Liberty Valance, a project dear to his heart, and he wanted it to be great. 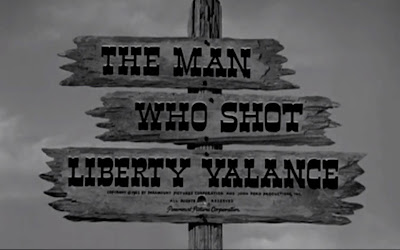 Title reminds us of My Darling Clementine
Liberty Valance began life as a story by the great Dorothy M Johnson, of A Man Called Horse and The Hanging Tree fame. But it differs greatly from the motion picture made from it. Bert Barricune (renamed Tom Doniphon by Ford) not only kills Valance for Stoddard but acts as a fairy godfather to him throughout, assuring his later success in life so that Hallie may be happy. Ford bought the story for $7,500 and put Willis Goldbeck and James Warner Bellah (who had collaborated on Sergeant Rutledge) to work on a screenplay. 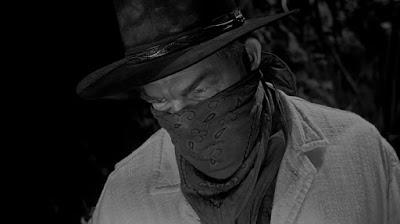 Doniphon is a horse trader, Valance a stage robber: they are both outdated professions
Ford was determined to make it a low-key, atmospheric film, in black & white and mostly shot on the lot. Both Paramount and DP William Clothier (who was increasingly Ford’s creative muse) wanted color. It was pretty well commercially essential by 1962 and Clothier preferred working in color. But Ford dug his toes in. “Goddam it, we’re going to do it in black and white.” As the story was mostly set at night, perhaps Ford thought that the black & white would enhance the dark and somber look and feel.


Yet it wasn’t so much the black & white that sunk the picture – Ford was after all a master of monochrome – but the lack of big skies and open prairies. To confine a Western almost totally to sound-set interiors and studio street scenes is a dangerous, not to say, fatal exercise. Westerns depend on action and scenery and movement. John Ford knew this, too – he of all people. Yet The Man Who Killed Liberty Valance is static and over-talky, and it lacks movement. It is true that certain great Westerns have been similarly confined to studio sets – one thinks of High Noon or The Gunfighter – but they depend on building dramatic tension to breaking point, which Liberty Valance simply didn’t have enough of. 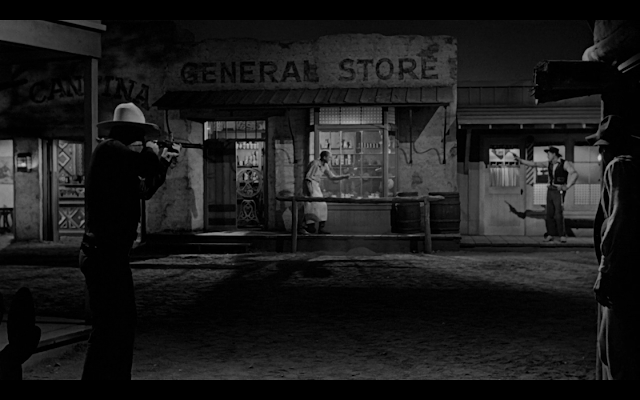 The man who shot
Despite Ford’s decision, the days of cheap pictures were past. Star salaries had gone through the roof. John Wayne would get $750,000 for the picture, to Ford’s irritation, against his own $150,000. But Paramount knew that Wayne was worth it. Producer Howard Koch there said, “The Big Cowboy was really the whole thing.” The star had been busy with Westerns since last working for Ford on The Horse Soldiers in 1959, with his own mega-project, The Alamo (1960), as well as starring in other Westerns to pay for it, North to Alaska (1960) and The Comancheros (1961). In Wayne’s absence Ford had used other Western stars like James Stewart and Richard Widmark. But Duke came back to ‘Pappy’ for Liberty Valance, and indeed, though James Stewart was fine, it was really Wayne who was the dominant presence on the picture. 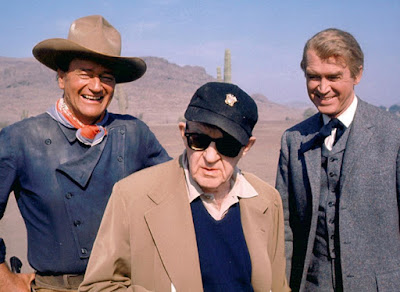 Wayne, Ford and Stewart on one of the rare locations
Stewart as tenderfoot Ransom Stoddard and Wayne as tough Westerner Tom Doniphon both put in powerful performances, even if both were a bit long in the tooth to portray the young Turks they are supposed to be – though of course for key parts of the movie Stoddard is an old man and Doniphon is in a pine box. James Stewart was known as the man who brought law and order to Bottleneck without a gun in Destry Rides Again way back in 1939 so perhaps he was an appropriate choice to do the same thing for Shinbone in 1962. Stewart and Wayne worked well together (as they were to do on their final Western, The Shootist, fourteen years later - another film about the dying of the myth). 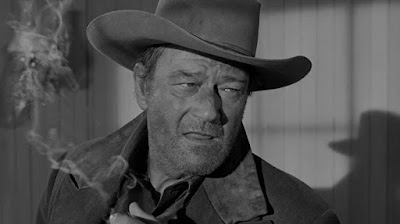 Wayne: dominant
Fortunately, Ford’s stock company of actors was by now tried and tested and the supporting cast is a veritable roll call of grand cowboy actors. Lee Marvin, though, who was new to Ford, was to be Valance. Ford took to Marvin immediately. The fact that Marvin was a periodic binge-drinker, had a passion for the sea, had seen valorous war service in the Marines and, like Ford, had quite liberal political views, as well as being descended from George Washington, all certainly helped. Ford also knew a fine actor when he saw one. Marvin was a superb actor and was splendidly bad as Valance, conveying deadly menace and snakelike charm extremely well. It’s a great part but Lee handled it brilliantly. 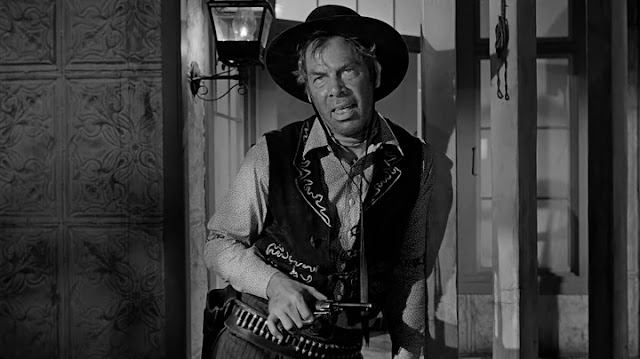 Marvin: superb
I wonder if Ford chose the name Valance and if so, was it a deliberate reference to the gunfighter in Howard Hawks's Red River? No, come to think about it, the title was Dorothy Johnson's, in 1953. Although I suppose she could have used the name after Red River. Anyway, where was I?

Further down the list, Denver Pyle and Strother Martin were again hired (they had been paired on The Horse Soldiers). Pyle got on well with Ford and became almost a confidant – while still, of course, addressing him as “Mr. Ford”. But Strother was terrified of the old tyrant. “I think Stroker’s getting used to me,” Ford said to Pyle one morning (he always called Martin ‘Stroker’). “He doesn’t jump as high now when I call him.” Whereupon Ford yelled “STROKER MARTIN!” and Strother duly levitated from his chair about three feet and rushed over. Ford turned to Pyle again: “He didn’t jump nearly as high as he used to, did he?” Pyle said that Strother regarded Ford as a god – “undoubtedly the God of the Old Testament.” 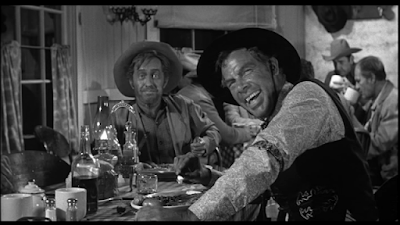 Strother henches Liberty
Denver was a bespectacled townsman, Strother and Lee Van Cleef were Marvin’s henchmen, and Edmond O’Brien is excellent as Peabody, editor of The Shinbone Star. Andy Devine is, as ever, entertaining, as the cowardly Marshal Link Appleyard of gargantuan appetite. Woody Strode is back, as Wayne’s 48-year-old ‘boy’ servant or slave, Pompey. John Carradine is there, as are John Qualen, Willis Bouchey, Carleton Young, OZ Whitehead and Paul Birch, Danny Borzage, Anna Lee, Jack Perrin, Uncle Tom Cobley and all – the usual suspects, you might say. 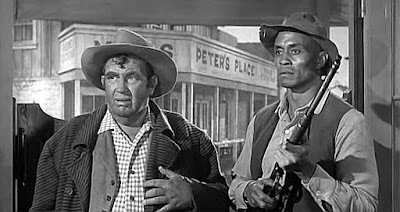 The themes of Liberty Valance were those that had always concerned the famous director: East versus West, the creation of law and order in a wild land, nostalgia for a bygone time of freedom. The film has something interesting to say on pacifism and courage and the freedom of the press. Much of the dialogue is well-written and thoughtful. There is just too much of it.


The whole look and feel of Liberty Valance is old-fashioned, from the monochrome and studio sets to the Cyril Mockridge music and the almost William S Hart costumes. The commercially successful but bloated How the West was Won (a segment directed by Ford) came out the same year – what a difference! And big, colorful, commercial, action-packed vehicles like The Magnificent Seven were now the thing, or modern angst-dramas like The Misfits. Liberty Valance was stuck in the 1940s. 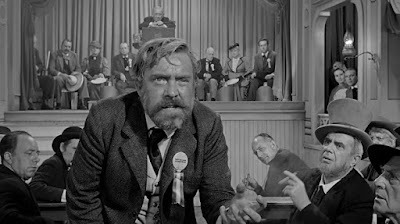 
It’s an old man’s movie. And the old man in question was losing his touch. Even his standards of personal hygiene had declined embarrassingly. Of course even the least of John Ford Westerns is not bad, exactly, and Liberty Valance is not the least of them. Though visually ordinary and unfashionable, it does have intense themes and a melancholy sobriety which compensate.

The triangle of manhood linking Valance, Stoddard and Doniphon is mirrored by that of tenderness between Stoddard, Doniphon and Hallie (Vera Miles). It’s well-constructed and crafted alright. Hallie, though, is tamed and civilized – Ranse teaches her to read and makes her a Senator’s wife – just as the West is tamed. Almost the last words are Hallie saying, “It was once a wilderness. Now it’s a garden.” But she loses her fire and the joie de vivre that Tom would have nurtured. 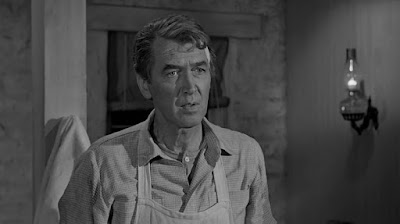 Not half the man Doniphon was

In the last resort, Stoddard has lived a lie. The myth is dismantled. And for all Ranse’s worldly success and Doniphon's apparent failure (dying unknown and alone in a backwater), Stoddard is not half the man Doniphon was. And he knows it.

Fundamentally, it's a very sad story. As the train recedes in the final scene, with Ranse and Hallie going back East, Ford’s bleakest film ends. 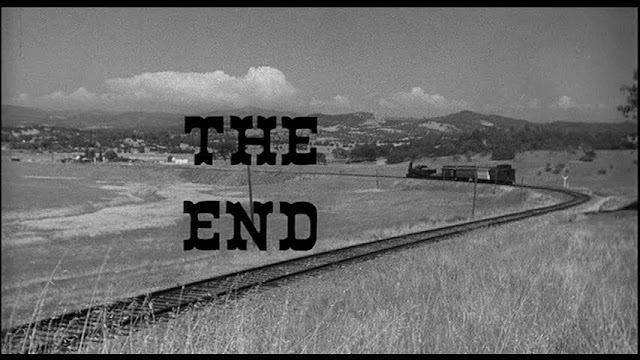 The reaction to the picture was very mixed. Variety thought it ought to have been shortened by at least twenty minutes, and they may have been right. Bosley Crowther in The New York Times called it “a rather sinister little fable” and regarded it as an example of creeping Hollywood fatigue. He may have been right too. Europeans were more laudatory. The Observer in Great Britain thought it was “bathed in Ford’s talent and affection.”


The picture even made a little money – the last Ford film to do so. And many people are fond of it. A friend of mine, a lover of cinema but not, poor soul, a Western fan, thought it perhaps the greatest Western she knew. To me, it certainly isn’t. I am more in line with Brian Garfield’s view, as expressed in his splendid guide Western Films:


It’s a terribly old-fashioned film, rather wistful, lacking in energy. The characterizations are reduced to the simplicities of ‘B’ formulas and I find it a dreary, tired movie.