For once, Jeff is neither an Indian nor an Army man

Regular readers of Jeff Arnold’s West, both of them, will be aware of the ALEPH, the Arnold Ludicrous Exclamation Point Hypothesis, which, well, hypothesizes that any Western with an exclamation point in its title is ipso facto suspect. Producers added the punctuation mark to make a bland title (and by extension probably a bland film) apparently more exciting. It rarely worked. So when I saw that this Paramount offering of ’59 was named The Jayhawkers!, well, I had my doubts.


However, while I would certainly not go so far as to say that this movie proves the ALEPH false (for The Jayhawkers! is a distinctly B-Western), I will at least concede that it is one of the better exclamation-pointed Westerns (he admitted, grudgingly). 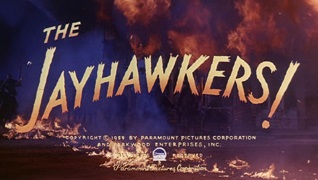 Bonanza-ish titles
It’s not low-budget, being shot (by Loyal Griggs, no less) in color and VistaVision and with a large cast. The headliners are Jeff Chandler and Fess Parker, and while Chandler was good but perhaps not at the very top of the Western tree, Parker was, then, enormously popular because of Disney’s Davy Crockett series, which had debuted in 1955. The hit song The Ballad of Davy Crockett, the Davy Crockett bubblegum cards and the Davy Crockett coonskin caps for kids were flooding the market. I'm sure you had one. Fess could do no wrong, and he began to star in big-screen Westerns, for Disney but also for other studios. In March of ’59 he had co-starred with Robert Taylor in The Hangman, and he stayed with Paramount for The Jayhawkers! later that year. It didn’t stop there, of course, because in the 60s he became Daniel Boone too. 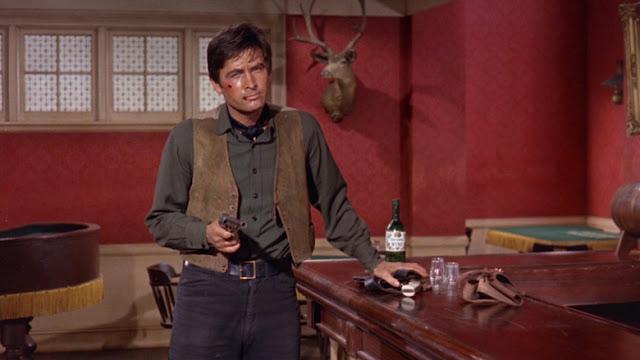 Fess sans coonskin cap
As you imagine, it’s a story set in Kansas just before the Civil War. Evil but charismatic Luke Darcy (Chandler) is a megalomaniac “backwoods Napoleon”, as the governor calls him (and indeed Darcy has a bust of Napoleon in his study) who dreams of transforming Kansas into a country. Nay, he has plans of empire building on a Napoleonic scale, so look out the whole USA. He has a devious scheme whereby he and his followers dress up as masked Missouri Redlegs and raid towns with mucho rape ‘n’ pillage, then they doff the maroon leggings and masks and present themselves as saviors and bringers of (rough) justice, being thus welcomed in town after town. Cunning plan, huh. 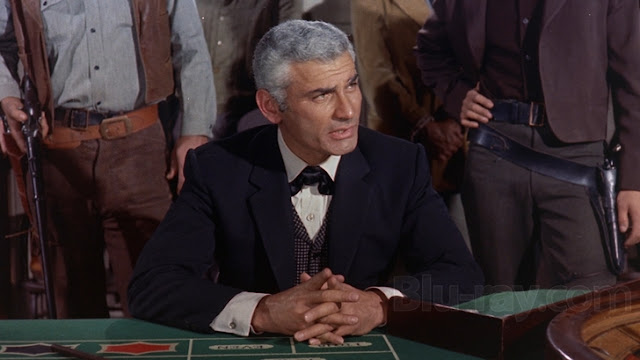 Backwoods Napoleon
However, the aims of the guerrilla bands are never addressed in the script and we don’t know if they are abolitionists, free-staters or what. The Jayhawkers here are just a gang.


Fess is Cam Bleeker, an escaped convict who discovers that it was Darcy who used and discarded his wife while he had been in the pen and the poor woman is now buried on the ranch, which has been appropriated and sold on to a glam French widow, Jeanne Dubois (Nicole Maurey) - and we sense within a microsecond that said widow and Cam will soon be getting it on and forming a new family with the widow’s two young children (they’ll probably go to California at the end of the movie). So when the Govr. proposes a deal to Cam, bring in Darcy in return for a free pardon, well, he goes for it. 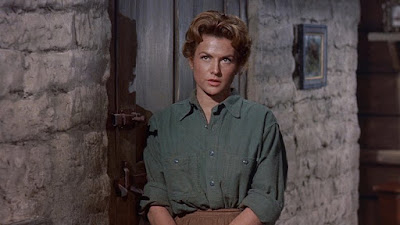 He finds a French widow in his house. Some people have all the luck.
That’s the basic plot. Though pretty one-dimensional, it’s reasonably interesting because along with being evil and mad, Darcy is also magnetic and charming, and despite the past hist., Cam can’t resist being drawn to the bandit leader, as a moth to a flame. So will he fulfill the bargain and deliver Darcy to the hangman’s rope? I wouldn’t say that there’s great suspense exactly, but there’s enough subtlety and ambiguity to give the story some spice.


Burly New Yorker Chandler, always good in oaters, had of course debuted, Westernwise, as the statesmanlike Cochise in Broken Arrow in 1950, and he returned as Cochise in The Battle at Apache Pass (1952) and, briefly (he dies in the first reel) in Taza, Son of Cochise (1954). When he wasn't an Apache, he was an Army man, as in Two Flags West, War Arrow, Pillars of the Sky, Drango and (in plain clothes) The Great Sioux Uprising. The Jayhawkers! was his eleventh Western. The Plunderers the following year was his last. He died aged only 42, during a routine operation for a slipped disc.


The picture was co-written, co-produced and directed by Melvin Frank. Frank and partner Norman Panama had a good contract with Paramount, working especially on Bob Hope movies and other comedies. The two didn’t dabble much in Westerns and those they did tended to be at the comedy end of the Western spectrum (A Southern Yankee, Callaway Went Thataway and The Duchess and the Dirtwater Fox). The Jayhawkers! was their only ‘straight’ Western. 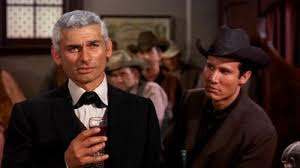 Silva is Fierro-like executioner
Henry Silva is Darcy’s chief henchman and killer, with hints of Pancho Villa’s Rodolfo Fierro. He faces off against Fess but is humiliated so spends the rest of the movie trying to get even. Much good will it do him. Leo Gordon the Great is a gang member whom Fess saves from being lynched. But he breaks a cardinal rule by bringing Fess to Darcy’s hideout. And rule-breaking is not permitted… 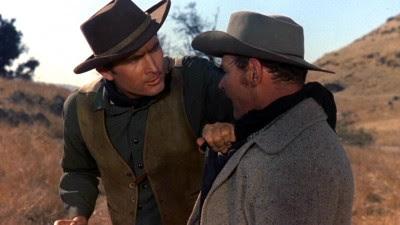 Take me to your leader. Fess saves Leo from the rope. But it only delays the inevitable...
And then in uncredited bit parts we have Glenn Strange the Great, Boyd ‘Red’ Morgan and Harry Dean Stanton.


The music, by Jerome Moss a year after he scored The Big Country, is nice, sort of Coplandesque. In fact one reviewer has gone so far as to call it “one of the finest and least-acknowledged Western scores that Hollywood has ever produced, filled with the leaping fourths and fifths that are the musical equivalent of the open Western lands, and about as thrilling and beautiful as has ever been written to accompany a picture.” Well, I didn’t think it was that good. But whatever turns you on.


The picture is all rather long at 100 minutes. I won’t say it drags, exactly, but the director needed a little more zip and pace. At least it ends with a climactic quick-draw showdown in a saloon. 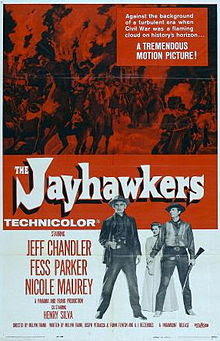