The Mescalero-Chricahua Apache Goyaałé, usually known as Geronimo, was played by many different actors on the big and small screen. Jay Silverheels was Geronimo three times and Michael Pate made a specialty of the role too. Ian MacDonald, Monte Blue, John Doucette, Peter Mamakos, even Chuck Connors were all Geronimo. In an age when it was usual for white actors (like Pate) to play Indian chiefs, there were, to be fair, quite a few ‘Indian’ Geronimos. In 1993 there were two pictures entitled Geronimo and in those Joseph Runningfox and Wes Studi did the honors, but even in the early days Chief Yowlachie was Geronimo in 1954. And the very first screen Geronimo was Chief Thundercloud. 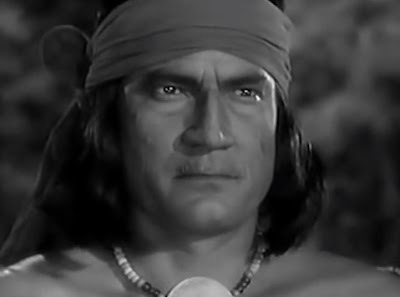 I suppose he looks a bit like the real Geronimo 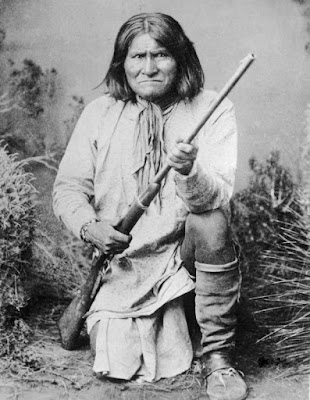 
It is not quite clear how Indian Chief Thundercloud (Victor Daniels) really was but he identified himself as a Cherokee. He had been the original Tonto in 1938 and was an Indian in very many Westerns (including The Searchers, his last) for thirty years.


Of all the thirty odd screen Geronimos, though, only four pictures actually centered on him and had his name in the title: those two in 1993, the Chuck Connors one in 1962 and this one, the first, a black & white Paramount affair of 1939.


Having said that, the 1939 movie was just a generic cavalry Western in which the fearsome Indian chief could have been anyone. It happened to be Geronimo because the name was a good box-office draw. The story is entirely fictional, and in fact is a bit of a pot-boiler. And Geronimo is only billed ninth. Thundercloud has very few lines and it’s almost a silent movie for him (and old-fashioned in other ways too).


Though much ballyhooed, Geronimo was really only a Western remake of the studio’s Henry Hathaway-directed Lives of a Bengal Lancer with Gary Cooper in 1935. It used a lot of stock process footage from other movies and much of it was shot on back-lot sound stages. They also make great use of those dreadful fake horses which actors ‘ride’ with laughably bad back-projection behind them. The writing is stodgy and the ‘heroine’ (second-billed Ellen Drew) spends most of the movie unconscious. 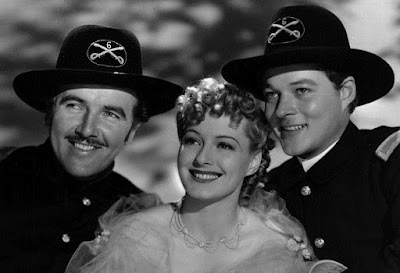 Preston Foster as brave captain, Ellen Drew as unconscious fiancée, William Henry as colonel's son, in a remake of Lives of a Bengal Lancer
It was both written and directed by Paul H Sloane, who had been under contract at Paramount since the silent days. But he only directed two oaters, this and a forgettable Jackie Cooper B of 1933, and he clearly had little understanding of the genre.


It stars Preston Foster in the Coop role. Foster, you probably know, was a songwriter/actor who specialized in he-man roles in the 30s and 40s and had started by co-starring with Barbara Stanwyck in Anne Oakley in 1935. He starred as Oakhurst in the 1937 The Outcasts of Poker Flat and later seemed to make a thing of pictures about horses (My Friend Flicka, King of the Wild Horses, Thunderhoof). In Geronimo he is brave and dashing US Army Captain Starrett on the frontier who knows the Apache but has to deal with a martinet by-the-book superior officer sent out from back East – a standard plotline in cavalry Westerns (Fort Apache did it best).


The superior officer is steely General Steele (there’s no sign of any Crook or Miles), personally entrusted by President Grant (Joseph Crehan) with the task of making peace with Geronimo. The movie opens with such scenes of slaughter of whites by the ferocious Apaches that the US is brought to a halt. In the opening title card we read that “The United States strives to thrust its borders westward – but in its path stands one man alone”. So Geronimo gets quite a build-up. This Gen. Steele is played by Ralph Morgan, often a distinguished-looking villain, here a distinguished-looking general. 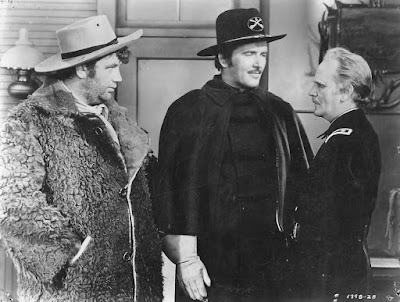 Chief of scouts Andy Devine and his pal Capt. Foster meet their new commander, by-the-book Ralph Morgan
The general has a young son (fresh-faced William Henry, later to be Dr. Sutherland in The Alamo) whom he hardly knows. The boy is just out of West Point and come West to serve with his daddy. But Rio Grande it ain’t. You know that the general won’t show any favoritism and will be hard on the boy, and the boy will resent the lack of affection, but then he will act bravely and probably bring help to his beleaguered dad by getting through Indian lines and coming back with the US Cavalry at the last minute.


That’s the plot really. You see it all coming in the first reel.


One good thing: Andy Devine is the chief of scouts, Sneezer. Of course he plays it in that fatly comic way he had, with high-pitched voice, and entertaining it is too. He has a bit of acting business with sketching cartoons on any surface that will take it. 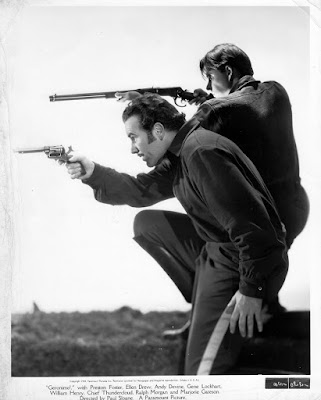 16 of them hold off 3000 Apaches. Yeah, right.
There’s a slimy crooked Indian Agent (Gene Lockhart), as there was bound to be, who is (equally inevitably) selling modern repeater rifles to the Indians. He gets his just deserts, though, at the hands of Geronimo himself.


Geronimo’s interpreter is good old Monte Blue, who would be promoted to Geronimo himself in Apache in 1954.


All sorts of excitements occur. There’s a great stunt by Devine’s stand-in when he shimmies down a cliff face and a tree. Geronimo gallops up alongside the mud wagon the lieutenant’s fiancée and mother are traveling on and shoots mama dead, then he orders the torture of the captured good guys; he even dresses up as a captain and sneaks into the Army camp (on a kind of Beecher Island) to do murder. 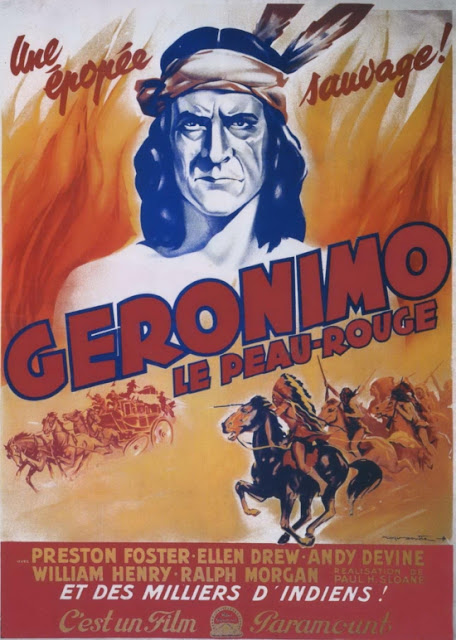 Nice French poster
Among the uncredited extras you can spot Syd Saylor, Francis Ford and Russell Simpson, so that’s good. Henry Brandon (Scar in The Searchers) was to have been in it, doubtless as an Indian, but his scenes were deleted, poor chap.


There’s a horribly cruel bit when one of the horses pulling the charging ammunition wagon stumbles as it crosses the river. This reminded me of Cecil B DeMille, who was ready to murder any number of horses to get a shot right, and indeed you get the feeling that Sloane was trying to be DeMille. It is a big picture with too many studio sets, a melodramatic plot and rather turgid action, just as DeMille would have done had he not been working on another Paramount picture that year, Union Pacific.


It all ends with much tear-jerking and flag-waving. It really isn’t a very good movie.