How Hollywood loved forts. There were Westerns named Fort Apache, Fort Bowie, Fort Courageous, Fort Dobbs, Fort Massacre, Fort Osage, Fort Ti, Fort Utah, Fort Vengeance, Fort Worth and Fort Yuma, to name but a few, and even many oaters without fort in the title featured forts largely. Fort Defiance is another. It’s a small-scale B-Western with some clunky writing but it’s full of action and two of the lead actors are terrific. 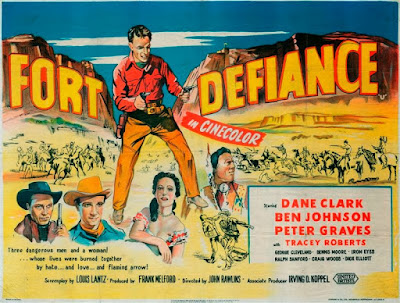 The picture was made by the Ventura Pictures Corporation, a small outfit that only made eight movies, 1950 – 58, and it was released by United Artists. It was directed by John Rawlins, who’d been in movies since the year dot, starting as actor, stuntman and writer in 1918, and he had directed serials such as Dick Tracy and Sherlock Holmes for Universal in the late 30s and early 40s. He did similar pretty low-level work for UA in the fifties. He only directed five Western movies, though, probably the ‘biggest’ being the enjoyable The Arizona Ranger with Jack and Tim Holt, father and son, in 1948. Rawlins was workmanlike rather than inspired but in Fort Defiance he did keep the pace up.


It was written by Louis Lantz, or rather overwritten, I would say. There’s too much plot and too much talking. Lantz had written the story on which River of No Return was based but he was no Western specialist.


What makes Fort Defiance a more than passable film is not the production, writing or direction, but the acting, some of it first class. The stand-out is Ben Johnson, always splendid, and really good here. Arizona, late 1865. Johnson is Ben Shelby, looking for revenge on a certain Jonny Tallon because Tallon surrendered in the war and caused the death of Ben’s unit, including his brother, on Tennessee Ridge. When he arrives at the Tallon place, though, he finds only Jonny’s blind brother Ned (an excellent Peter Graves) and elderly Uncle Charlie (George Cleveland, Gramps on the original Lassie, also very good). Graves handles the blindness very skillfully and also manages the naïf hero-worshiping younger brother very well. 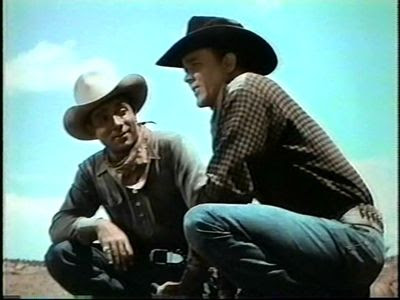 Shelby hears that Jonny is dead, and he gradually forms an almost fraternal attachment to Ned, so decides to stay. However, there’s a bad guy in town, saloon owner Dave Parker (Craig Woods, son of western actor Harry Lewis Woods) and his brothers too were slaughtered on Tennessee Ridge, so he also wants revenge – not only on Jonny but on Ned too. Ben isn’t having that.


Well, there are many plot developments thereafter, not the least of which the appearance of two-gun Jonny, not dead after all. Jonny is played by Dane Clark, not the world’s greatest Western actor, I fear. Brooklyn-born (in fact one of his nicknames was Brooklyn) Clark was proud to call himself “Joe Average”. He did a lot of war films but also got the lead in a handful of Westerns in the early 50s (this was his second). His sidekick Hankey was good, though, in a very short part, played by Brian ‘Slim’ Hightower, a stuntman who had worked for John Ford. 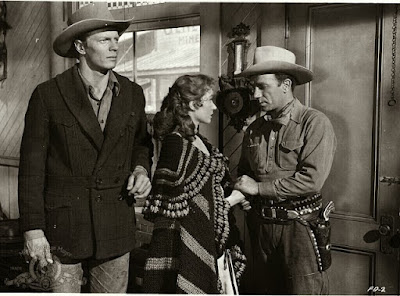 Iron Eyes Cody, billed as just Iron Eyes, is the Navajo chief. They’re just Hollywood Indians whom it is perfectly OK to slaughter.


There’s a bit of perfunctory love interest, not for Ben (his wife only arrives in town in the last sixty seconds of the picture) but for blind Ned. It’s Tracey Roberts, doing a classic whore-with-a-heart-of-gold act straight out of Stagecoach. There’s another Stagecoachy bit when the Navajo attack the diligence Tracey is on.


The Utah locations are very nice and are well shot by DP Stanley Cortez (Apache, Man from Del Rio). The picture is in good color. The music is by Paul Sawtell. So the movie definitely has some points in its favor.


But head and shoulders above all of the rest is the performance of Ben Johnson. He was both an utterly convincing Westerner (you should watch this movie just to see the way he rides) and also a powerful actor capable of great subtlety, even with rather ordinary lines.


Certainly worth a look.