Saddle by Starlight by Luke Short

Saddle by Starlight was Luke Short’s 30th novel of 51, published in 1952. Unusually for Short, it doesn’t start very well, there being in the first chapter too many characters to get your head round. But it soon settles down, and these characters emerge as real people you can picture.


It’s the story of Sam Holley, tough ranch foreman, and his efforts to unite the fractious ranchers of the area in order to keep away homesteaders wanting to plow up the cattle range. It’s a common theme in Westerns, of course. More usually the homesteaders are honest farmers and right is on their side, while the ranchers are ruthless plutocrats ready to resort to violence. This time, though, there is a subtler approach, and we can see the arguments on both sides. 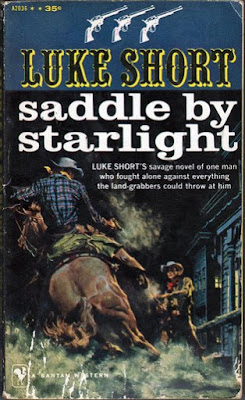 The bad guy (though he has saving graces) is surveyor Ganley, who realizes that the valley is technically public land and who sees future profit in backing homesteaders to settle there. He is neither rancher nor farmer, merely ready to use others as proxies to make him money, a parasite rather than a worker.


At first Sam and neighboring ranchers drive the sodbusters off pretty easily. But trouble arises when Ganley brings in two very unsavory thugs from Texas, and these men are not going to be dissuaded easily. They are murderous. The plot thickens as they beat another ranch foreman, Bill Tench, to death in an alley and Sam, who strongly dislikes Tench, gets the blame.


There’s a decent, honest sheriff who tries to be fair and tries to keep the peace. And of course there are attractive females around too. Virginia is Sam’s girlfriend who thinks the rancher’s treatment of the settlers wrong, and gradually moves away from Sam and towards Ganley, while Lydia is a sodbuster’s sister who at first loathes Sam as a bully but gradually softens towards him (and he to her). So characters develop.


Tension mounts as events lead to a climax of gunfire and death.


But the good guys win out in the end, you will be relieved to hear.


I like Luke Short stories. They are short, fast-paced Western tales with authentic detail, well-defined characters with strong points and failings, and a plot that you can easily imagine as a 1950s movie. Indeed, many were made into films (though not this one) and some were very good films too.


If you pick up a Luke Short you won’t be disappointed. They are reliably good, and well written into the bargain. Many came with lurid paperback covers and they can be mistaken for pulp Westerns, but they are better than that. He only wrote about one a year and they were carefully crafted. His women are usually strong and determined, and his heroes are thoughtful as well as tough.


My edition was published in London (by Collins) and therefore has British spelling (travelled, centre, and so on) which seems a bit odd in a Western, but it’s quite amusing!


There are very few pictures of Short available (I only knew of two) so it was nice to have a new one on the dust jacket of the book, which I have scanned for you.