A credit to the genre

Regular readers will know how keen I am on the Western novels of Luke Short (Frederick D Glidden), 1908 – 75. Raw Land, first published in Western Story Magazine in 1940 under the title Gunsmoke Graze, is an absolute cracker. Short’s stories read just like a good B-movie, and indeed, many of them were made into top-class films – classy motion pictures such as Albuquerque, Blood on the Moon, Ramrod, Coroner Creek, Station West, Vengeance Valley and Ambush all came from Luke Short novels. Raw Land could have been a gripping movie too, maybe starring Randolph Scott and directed by Budd Boetticher, for example. It wasn’t, but it still makes a great read. 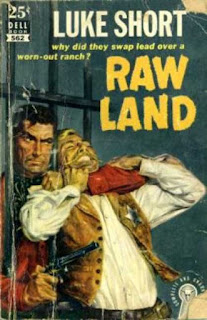 Don't be put off by the lurid cover


Short gave us taut, gripping storylines with believable characters and authentic detail. His novels were paced like movies, with a contained number of characters, none all-good or all-evil, all understandable, with developing plot and a gripping climax. It’s a pretty good recipe.


Raw Land concerns tough hombre Will Danning, who turns up in the one-horse town of Yellow Jacket. He has bought a hardscrabble farm nearby. No one gets why he should want it: it’s a ratty place with bad land and little water. A local rancher’s foreman, Pres Milo (the nearest we get to an out-and-out bad guy) seems overly keen on the place and will do pretty well anything to get it (including murder). But Will won’t sell. Myself, I see Randy Scott as Danning, Arthur Kennedy as Pres and John McIntire as the ruthless rancher. 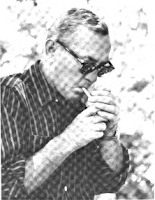 Luke Short
The rancher has a pretty but strong-minded daughter, of course, Becky (I’m going for Susan Hayward), who is attracted to Will (and vice versa, let it be said) and there’s a stern but fair Sheriff Phipps (Edgar Buchanan, or maybe Ray Teal). Lastly, of the main characters, there’s the urbane, glib foreman of Will, a smiling lady’s man, Milt (perfect for Lyle Bettger) who, it turns out, is on the run and being sheltered by Will.


As the story pans out, the reason why Pres wants the ranch is made clear and various plots are hatched to enable him to secure it. Will is forced to strap on his guns and go on the run. There’s a showdown ending. I shall not reveal to you, dear e-reader, what this dénouement may be. You will have to read the story for yourself to find out.


What I will tell you is that Raw Land is another fast-paced story from the master. Some have accused Luke Short of churning out pulp Westerns. It is true that his novels are short paperbacks, often with lurid covers. But don’t be fooled: they are classy well-written tales which are a credit to the genre.