The Savonarola of the West 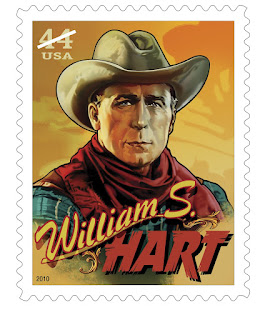 Honored on an American stamp
He wrote, directed and produced many of his movies as well as starring in them, and he created and maintained a screen character which became a standard for the genre: a tough, quiet hombre who followed a strict Western code of honor. Often he was a good-badman redeemed by the love of a pure woman. He rarely smiled on screen – life was too serious for that. 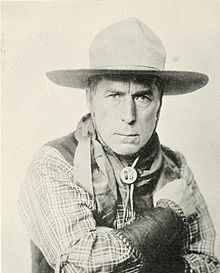 Stern
He made many one- and two-reeler silent movies in the early days, often working with the great Thomas H Ince, and moved on to longer feature films with almost epic pretensions. And he insisted on ‘realism’ and ‘authenticity’ despite the fact that his Westerns were really screen versions of dime novels.


This insistence on authenticity was curious in a way. Hart was born in the East (Newburgh, NY) and grew up in New York City. He was a professional stage actor, not a cowboy. He was well known as an Eastern thespian before starting motion pictures. He acted in Shakespeare plays and was in the 1899 stage production of Ben-Hur. Apart from a short trip in the 1870s, Hart did not experience the ‘cowboy and Indian’ West until he first began to make Western movies at the age of forty-nine.


But he was noticed as a cowboy in a minor part in the New York stage version of The Squaw Man and appeared in Owen Wister’s The Virginian on Broadway in 1904. Suddenly, he was an ‘authentic’ Westerner and he even asserted, untruthfully and rather ungratefully, that Wister’s work was “at variance with cowboy life as I knew it.” 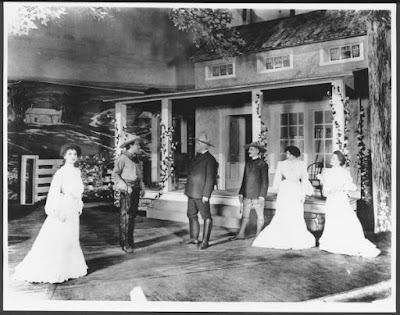 The Virginian on the stage
But he made a conscious effort, consulting Wyatt Earp, Bat Masterson and other survivors of the ‘real’ West, and insisting on ‘authentic’ Western costumes (i.e. scruffy and utilitarian rather than glamorous or showy). He grew fascinated with the West and owned what were said to be Billy the Kid’s pistols. In interviews he displayed his knowledge of the West to justify his ‘cowboy’ credentials.


He started in movies as Messala in the screen version of Ben-Hur, reprising his stage role, but soon moved into the early Westerns. The Bargain (New York Motion Picture, 1914), written and produced by Ince, and a long film at 70 minutes, made him famous. He played bandit Jim Stokes who robs the stage but is wounded. Recovering on a ranch, he falls in love with the rancher’s daughter, marries her and tries to go straight. It was a classic Hart plot and was to become the standard. 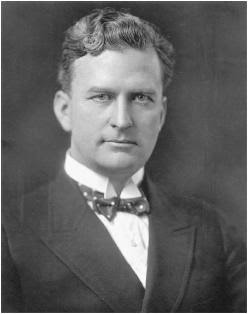 Thomas H Ince
Through 1914 and ’15 Hart made a long series of Western shorts with Ince which became extremely popular with audiences at the nickelodeons. See, for example, Knight of the Trail (Mutual Film, 1915). Sadly for us, relatively few still exist. In fact time has played havoc with Hart’s work. As far as I can tell, only about 25 of the 75 movies he is credited with are still extant, many in the Library of Congress.


Hart was impressively tall, and his long, gaunt face, with its thin-lipped, grimly-set mouth established his character in the silent world of the screen. He looks like a Western Savonarola, and had something of the same puritanism. 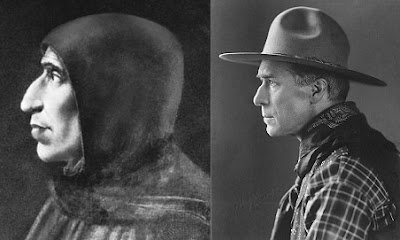 The Savonarola of the Plains (right)
In the fall of 1915 Hart saw and was greatly impressed by DW Griffith’s The Birth of a Nation, and he determined to bring the epic scope of that picture to the Western. (Griffith, the great genius of early American cinema, had made 44 Westerns since 1908 but was soon to abandon the genre). The result of Hart’s labors was Hell’s Hinges (Kay-Bee Pictures, 1916), a large-scale production with a very substantial budget for those days of over $30,000. It was a huge success. Naturally, Hart’s character, Blaze Tracey, was a tough badman redeemed by the love of a good woman (Clara Williams). 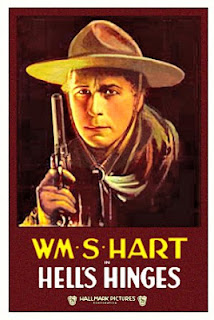 Epic
Hart was certainly influenced by the racialist school of thought most famously promulgated by Theodore Roosevelt, Frederic Remington and Owen Wister, which held that the Anglo-Saxon was a superior race to others and the West was the proving ground of such hardy Aryans, 'nature's aristocrats'. Hart’s villains tend to be half-breeds and Mexicans or other “low types” (saloon keeper and racketeer Silk Miller in Hell’s Hinges is described on an intertitle card as “having the oily craftiness of the Mexican.”) The films Hart made after Hell’s Hinges, such as The Aryan and The Patriot, made this even more explicit. The Return of Draw Egan, though, at the end of the year, was a straight Western and an excellent Hart picture (perhaps indeed my favorite) which gave us an early tough town-taming lawman, and even added a slight touch of humor to the mix. 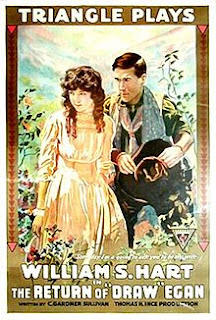 Fun
In 1917 Hart accepted a lucrative offer from Adolph Zukor to join Famous-Players Lasky, which later became Paramount Pictures. The one-hour long The Silent Man (still with Ince) was his first Western for them. He was by now firmly established as the leading Western actor, and his pinto Fritz was almost as famous. Quentin Tarantino referenced Fritz in his recent Django Unchained, by the way. Thought you ought to know that. 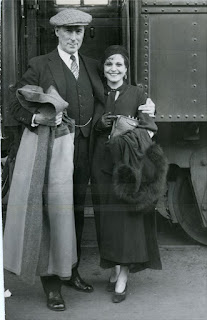 Winifred Westover, Mrs. William Hart (for a time) - but see one of the comments, below

William S Hart Jr.
As the 1920s dawned, though, it was clear to many (including, reluctantly, Hart) that his brand of gritty, downbeat Western was falling out of fashion. The movie-going public was much more attracted to the flashier, faster, more spectacular kind of cowboy hero. Trick-riding and stunts became the rage and costumes became glitzy and theatrical. Tom Mix movies like A Ridin’ Romeo (1921), Just Tony (1922) and Sky High (1922) were huge hits. Hart made only four Westerns in 1920, four in 1921, and only one each in 1922, ’23 and ’24 (when he was Wild Bill Hickok). Finally, Paramount dropped Hart in 1924, when he was sixty. His era was clearly over. 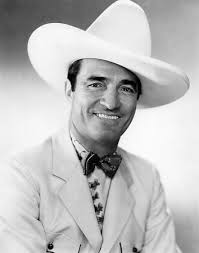 The great Tom Mix
Hart would not give up, however, and made one last bid to establish ‘his’ West as the ‘real’ one – or perhaps to bid a nostalgic and elegiac farewell to that West. He produced Tumbleweeds, about the 1889 land rush at the opening of Oklahoma Territory to settlement. Hart’s take on this was that the old cowpokes had to give way to the settlers, and it was the end of the West. The subtext was, of course, that it was also the end of the Western. 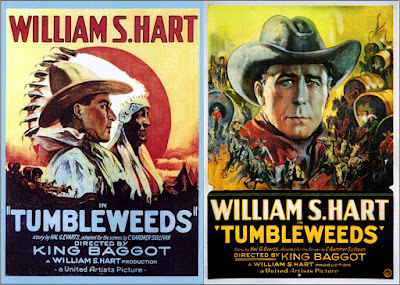 Hart's farewell to the Western
It was to be an epic, a large-scale picture which impressed by its sheer scope and its quality too. He raised some money for the project but a great deal of the funding came from his own bank accounts. He put up the astronomical sum for those days of $100,000. The film was released through United Artists and it turned out quite well – certainly spectacular - though it was hopelessly melodramatic (not to say corny) for our day - and even then, really. It only did moderate box-office business. Hart blamed UA for not promoting it properly and sued. The legal proceedings dragged on for years and the courts did in fact finally rule in Hart’s favor, in 1940, but by then legal fees had cost him more than he won and he was 76, frail and broken. 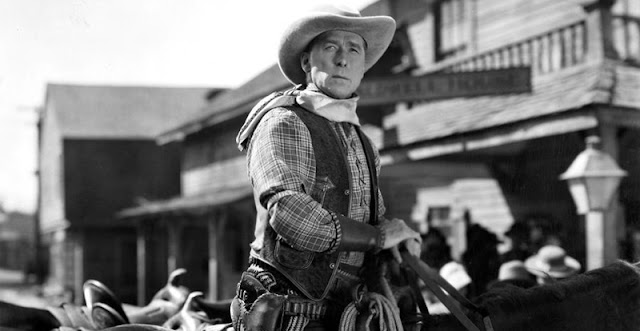 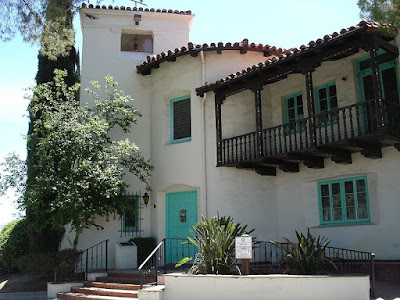 The Newhall ranch home
In 1939 he appeared in his only sound film, a spoken prologue for a reissue of Tumbleweeds. On location at his Newhall home, the aged Hart reflects on the Old West and recalls his silent-movie days fondly. The speech turned out to be his farewell to the screen. Most prints and DVDs of Tumbleweeds circulating today include the speech. It is over-the-top, hammy and almost embarrassing to watch today but it’s a fascinating insight into Hart.