The original of The Quick Gun

A few weeks ago on this blog I wrote a review of an Audie Murphy Western, The Quick Gun, and a kind reader, Boppa, left a comment to say that The Quick Gun was in fact a remake of a Jim Davis Western of only four years before. I didn’t know that, so I sought out the original and watched it, and can now tell you about Noose for a Gunman.


The Quick Gun was pretty well a straight remake; the story and even some of the dialogue (Robert E Kent and Steve Fisher) are the same. Noose is in black & white while the remake was in color but the original can hold its head up – it is as least as good as the Murphy vehicle in my estimation. There are a few small differences: the hero does not meet up with the bandit leader before hitting town in Noose, and there is no plot device of coming back to reclaim daddy’s farm. Case Britton (Davis) is the gunman rather than Clint Cooper (Murphy) in the Columbia picture. The sheriff is not the hero’s rival for the hand of the fair maid in the first movie. But these are minor tweaks. And the gang boss (Cantrell/Spangler) is played by the excellent heavy Ted de Corsia in both!
In fact as far as the cast goes, I would say honors are even. Davis is the equal of Murphy as the gunman who wants to hang up his irons and settle down with his true love. The part of the ruthless town boss is stronger in Noose and is excellently played by Barton MacLane, Western heavy par excellence, so that gives the edge to Noose, and what’s more, Leo Gordon the Great is his principal henchman, Link Roy, a huge plus. But on the other hand James Best is better as the sheriff in The Quick Gun (Walter Sande in Noose is solid but no more) and the Murphy picture also benefits from good old Frank Ferguson as the heroine’s dad, a figure absent from Noose. But the ally of the hero in Noose is Harry Carey Jr., so you pays your money and you takes your choice. One thing I will say, Merry Anders as the gunman’s intended in The Quick Gun was much superior to Lyn Thomas in Noose; Thomas was a poor actress. 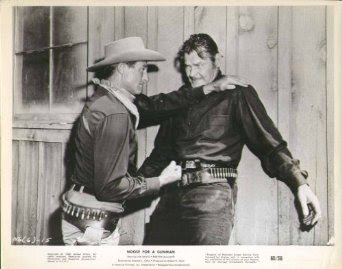 Leo was beaten up in fistfights in pretty well ever Western he was in. In reality, he would have been the one doing the beating up.
Edward L Cahn directed Noose. A former editor (he had worked on the 1930 All Quiet on the Western Front), he knew about pace and building tension. An imperturbable pipe-smoker, he would quietly turn his hand to every genre under the sun, including Westerns, starting with the famous Law and Order of 1932.


De Corsia is Cantrell, brigand chief, and we find many bandits with this moniker or a similar one in Westerns - take for example Walter Pidgeon's Cantrell in Dark Command. This Cantrell is said to be an ex-Confederate guerrilla leader and of course the Western movie model is William Quantrill or Quantrell (1837 – 65). Ted is great, though, and plays the part with gusto – in both movies. 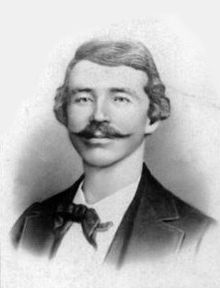 Ted de Corsia is ex-guerrilla bandit Cantrell
(though the picture is of him as Shanghai Pierce in Gunfight at the OK Corral)
The opening shots of Noose are classic as the notorious gunman rides into town watched fearfully by the townsfolk. The gunman’s brother used to be marshal but was killed by Barton MacLane’s no-good sons, said sons being then dispatched by Jim. It’s a Wyoming setting: Rock Valley is between Casper and Laramie (Rock River is between those two towns today so maybe Rock Valley is that). It was filmed up on the Iverson Ranch in California, though, so it’s not that Wyomingish. 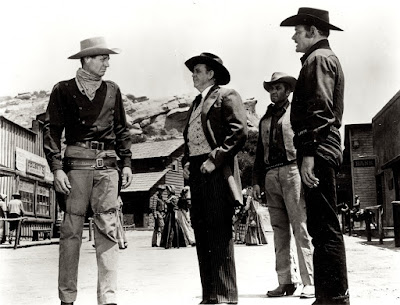 Good gunslinger hero Davis faces off with bad guys Maclane and Gordon
Jim and his lady love, the couple now espoused, set off in a buggy in the final reel, in High Noon style. Jim doesn’t want to be marshal of Rock Valley full time, thank you very much. Well, who can blame him, for the townspeople were pretty mean to him. They kept a noose waiting just for him. But anyway Jim wants to hang up his guns and farm. His wife spent most of the film trying to persuade him not to do what a man’s gotta do, in true Western-movie tradition, though, also High Noonishly, she intervened (with an eight-gauge) to save her fiancé during the three-way Ted/Jim/Leo final gunfight – which is rather good, in fact. 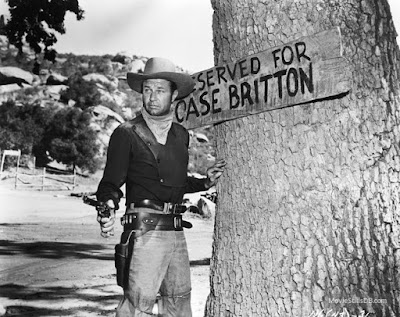 Above him, hanging from the tree, is the eponymous noose
Decidedly, Noose for a Gunman is not the poor relation of this pair of movies and I would recommend either or both to you. I may have been ever so slightly generous with the revolver rating on this one but well, with Leo Gordon and Harry Carey Jr. in it, what you gonna do?