Billy the Kid as goody

Of all the silver-screen representations of Billy the Kid, the Buster Crabbe ones were probably the silliest. Clarence L Crabbe II (no wonder he preferred 'Buster') was of course enormously famous: not content with winning Olympic gold in 1932, he went on to be king of the jungle (rival of Johnny Weismuller), and, as if that were not enough, conquer the universe - twice, once as Flash Gordon and again as Buck Rogers. You’d think that would be achievement enough for anyone, conquering the universe twice. 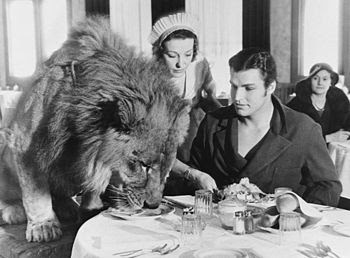 Buster has lunch with a pal
But in 1941 he also began a long (it seemed endless) series of B-Westerns in which he starred as Billy the Kid – well, a kind of Billy the Kid anyway. PRC actually stood for Producers Releasing Corporation but most people referred to it as Poverty Row Corp, and these films were ultra-low-budget juvenile second features that became a mainstay of 1940s theater programming. Frankly, they were dire. 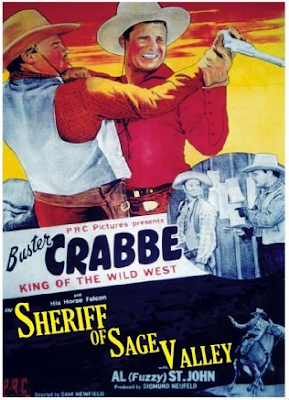 Billy the Kid becomes sheriff
But that is to look at them with hindsight. At the time they were hugely popular and a lot of fun. Crabbe’s Billy was an out-and-out goody. In fact he was very much in the mold of classic white-hat cowboy hero, ridin’ the range and doin’ good, ably assisted by two sidekicks, as most of these heroes were – a (relatively) handsome one and a (usually bearded) comic-relief one. He was always referred to as an outlaw, and was of accused of outlawish crimes, but heaven knows why because he never did anything the least outlawy. Sometimes he even became sheriff.


In fact Crabbe’s Western career was rather better than these junkers suggest. Paramount put him in its Zane Grey Westerns with Randolph Scott in the early 30s and from Nevada in 1935 he began to lead in their B oaters. In later life he did Westerns that were, well, I wouldn’t say A-features exactly, but they weren’t poverty row stuff either. He was a surprisingly good Wyatt Earp in Badman’s Country in 1958, topped the billing in a Western for the last time in Gunfighters of Abilene in 1960 and starred with Audie Murphy in Columbia's Arizona Raiders in 1965. His swansong was the curious The Bounty Killer in which he appeared with several other anno domini erstwhile cowboys. In fact these Westerns Crabbe did when he was pushing 60 were probably the best he had ever done.


But Sheriff of Sage Valley is, I fear, one of the worst of the Billy the Kid ones. It’s one of those movies in which the star plays two parts, the hero and his evil twin brother. You didn’t know Billy the Kid had a twin brother? Yes, it’s Ed Bonney, known as Kansas Ed, the meanest hombre west of the Pecos. Or something. Actually, although by modern standards there’s pretty crude doubling when he fights himself, there are scenes, such as the one in which one of them dies (no prizes for guessing which) that are quite sophisticated in the way they are done. Not bad for Poverty Row. 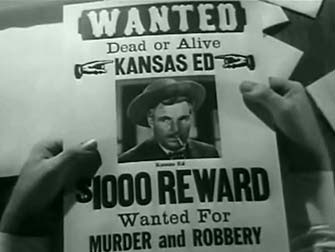 Buster as tough-guy badman
In point of fact I think Buster acts better as the bad bro than he does as spotless hero in dude duds. As besuited Ed he reminded me of Brian Donlevy. I expected him to pull a derringer out of his sleeve at any minute.


Most screen Billies were a bit long in the tooth. The real Billy the Kid was, as far as we know, barely out of his teens when he was killed in 1881 but actors who played him tended to be a trifle more geriatric than that. Buster was 33 before he even started the series so by the end of it was hardly a ‘kid’ any more. Some actors could get away with it. Audie Murphy still looked 12 after he had retired. 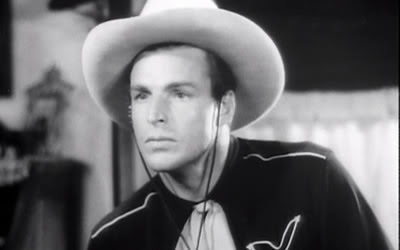 Managing to look quite kid-ish despite his years
Buster’s comic sidekick is Al St. John, obviously, Fuzzy, and Dave O’Brien is the straight one, Jeff. Everyone knows Al, the Keystone alumnus who sidekicked Buster as well as Lash la Rue, Robert Livingston and others for so long. Tex O’Brien was a regular of B-Westerns all through the 30s and 40s (before he moved on to being a comedy writer and TV director). He was wildly popular with kids because of his Captain Midnight serial.


There is far too much talking and one wonders why the infantile audience were so keen on these pictures. The kids probably didn’t notice how cheap and trashy the sets were but surely they got bored by all the blah-blah as the characters explained the plot to each other? Oh well.


Naturally, skullduggery is thwarted in the 57 minutes permitted and all’s well that ends well. The pals ride off into the sunset for another adventure.


Kermit Maynard has a part as Slim. Kermit, you will know, started as stuntman and stand-in for his famous brother Ken in the silent days but became a talkie Western star in his own right, with his faithful horse Rocky. As time passed he cheerfully accepted smaller and smaller roles, often uncredited bit-parts, and he can often be spotted in B-Westerns of all periods. Later, he did loads of Western TV shows. His last appearance was in a Gunsmoke episode in 1963. He is credited with an astonishing 550 Westerns. Respect.