Buster Crabbe made six Billy the Kid movies in 1942 alone (and two other films). So at least he was working, even if it was for Poverty Row. There was a market for the pictures, particularly a juvenile one, and Crabbe’s absurdist version of the outlaw (he is a total goody) was very popular.  Still, Buster was unhappy in the role and increasingly frustrated. The movies were very samey: the three compadres (Crabbe, Al St. John and Tex O’Brien) drift into town, thwart some criminal endeavor and ride off into the sunset. 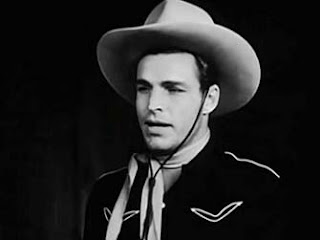 Billy the Kid’s Smoking Guns is, though, very slightly better than the others, or anyway let’s say marginally less dire. It even has the slightest allusion to the story of the real Billy the Kid, with a plot about “the association” having a monopoly and the local ranchers (goodies) opening a rival store. But it’s the mixture as before: a crook in a suit (John Merton this time) with a tame sheriff (Ted Adams) has treed the town, and the hero and his sidekicks thwart the villains.

Unusually, though, there’s no glam girl involved this time (the young boys in the audience probably approved), no brave lass to aid the heroes and be - chastely - romanced. There is an evil doc, though (Milton Kibbee), which is a bit different (doctors are usually goodies in Westerns, though I do recall a baddie doc in a Tex Ritter oater, Arizona Trail) and Slim Whitaker is a rancher apparently on the side of the angels but actually in cahoots with the bad guys. 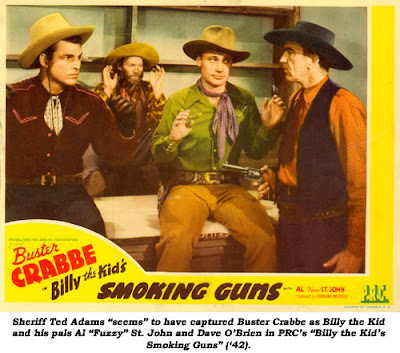 The director was Sam Newfield this time, brother of Sigmund Neufeld, head of the studio. Newfield directed so many pictures for PRC that he sometimes changed his name so that the public wouldn’t think the studio only had one director. He is credited with an enormous number of Westerns, starting in 1934 and ending in 1958. However, you wouldn’t know Billy the Kid’s Smoking Guns was a “Newfield” movie. It’s just another formulaic picture with characters endlessly talking, explaining the plot to each other on ultra-cheap and very unconvincing sets, interspersed with rare outside action as heroes and/or villains gallop from A to B.

Jeff is shot this time, in a gun battle with the villains in the rocks, one of those gunfights where the protagonists endlessly throw shots at each other with handguns at 300 yards. He recovers though, despite the murderous doc. It’s Fuzzy who has the idea of the rival general store; indeed, it is named Fuzzy’s Emporium.


Buster and his pards are kind to a small boy in the first reel, a sure sign of goodiness.


For devotees only, I fear.