Many Hollywood Westerns, especially in the 1920s and 30s, concentrated on themes of nation-building, cross-continental expansion. There were epic ‘manifest destiny’ films about covered wagons pioneering westward settlement, such as The Covered Wagon and The Big Trail, while other movies focused on communications like the building of the telegraph (Western Union), the Pony Express (Pony Express) and of course the construction of the railroads (The Iron Horse, Union Pacific and many more). Such pictures often showed Abraham Lincoln as a visionary of hallowed dignity, determined to build a united nation that reached from coast to coast. Very much in this tradition came Paramount’s 1937 offering with their new star, a handsome young Joel McCrea, in the lead part, Wells Fargo. 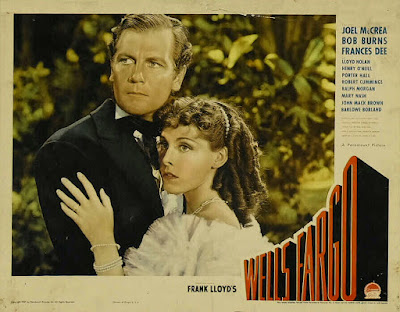 
It was Mr. McCrea’s first starring role in a Western, the genre he came to love and of which he became a leading figure. He had had a tiny walk-on part in Scarlet River in 1933 (hardly a Western at all) and been third billed in the semi-Western Barbary Coast in 1935. In 1939 he would nation-build again as a railroad man in Union Pacific. Later he would go on to be a leading Western actor and would play, among other figures of the mythic West, Buffalo Bill, the Virginian and Wyatt Earp. In fact, though, like Barbary Coast, Wells Fargo is only nominally a Western: it is really more a big-budget historical romance.


A faux-historical veneer is given to the movie with places and dates coming up on the screen before the various episodes, as if it were some kind of documentary. Like all such pictures, however, it was more romance than history, and liberties are taken with the historical facts, but as I have often said, we don’t watch Hollywood Westerns for a history lesson. As long as they avoid spurious claims along the lines of ‘this is how it really happened’, I have no problem with historical hokum on the silver screen. 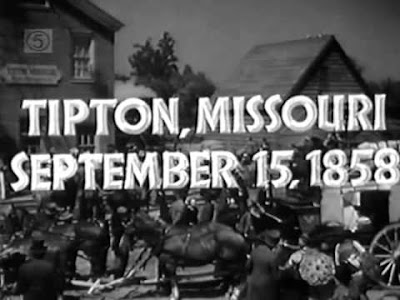 Faux-documentary
It’s a big, colorful (well, we imagine it’s colorful; it’s a black & white movie) epic treatment of the establishment of the mail routes that joined the Atlantic with the Pacific coast. Joel McCrea does it almost single-handed: he is Ramsay MacKay, right-hand man of Henry Wells (Henry O’Neill) - William G Fargo is oft mentioned but never appears. The picture covers thirty years and the make-up department is busy aging the actors in the last reel.


A huge team of seven writers was employed to adapt a story by Stuart N Lake, the journalist and popular ‘historian’, and the resulting farrago (for, dear e-readers, it is rather a farrago) was directed by Frank Lloyd, who asked for McCrea. Lloyd was a Scottish vaudeville player who emigrated to Canada, then directed early silent movies for Fox, many of which were Westerns, including the 1918 Riders of the Purple Sage. For Samuel Goldwyn, then Warner Brothers, then Paramount, he directed many big-budget historical films through the 30s, such as the 1935 Mutiny on the Bounty, and was a big-ticket name by 1937. 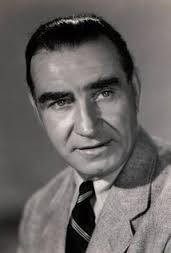 Frank Lloyd (not Wright)
There’s noble, swirling Victor Young music and quite impressive photography by Theodor Sparkuhl, not a Western specialist though he did five, including Randolph Scott’s last film for Paramount, The Texans, the following year. There are good California and Colorado locations and very many extras. It was not done on the cheap. And the cast is huge.


We start in upstate New York in 1840 as a rather splendid tall-stacked early locomotive tows a train into the station (much to the fright of rearing horses) and an enthusiastic Joel McCrea distributes the long-awaited mail to the crowd, whom he seems to know individually, personally, even intimately.


From there his career progresses rapidly as he maps out the route to California, establishes 120 way stations and fights off Confederate attempts on the gold he is carrying, until by the final reel he is a rich, gray-haired vice-president of the company. 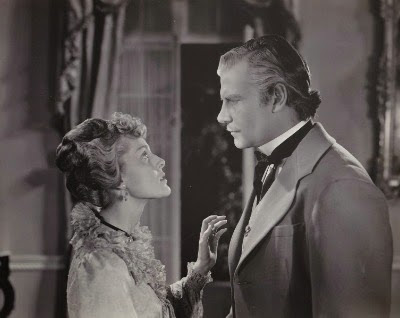 They age
But essentially, all this derring-do plays second fiddle to the love story between Joel and the rather tiresome Justine (Frances Dee, Mrs. McCrea) who is a spoilt Southern belle with a harridan of a mother (Mary Nash). Ms. Dee, who only did four Westerns (the best was also with her husband, Four Faces West in 1948) is pretty but labors to make such an unattractive character sympathetic, and Ms. Nash is doomed from the outset. The couple are estranged after a note written by Justine detailing the route of the gold shipment falls into the hands of the Rebs (the wicked mother sent it), but will later be reconciled through the good offices of their daughter Alice (Peggy Stewart).

Frank McGlynn is Lincoln, again. He did look a bit like Abe and rather cornered the market in Lincoln portrayals. There’s a young ‘John Mack Brown’, who plays Joel’s rival for the hand of Justine, joins the Confederate army and is shot down trying to ambush Joel’s gold shipment in Colorado. Bob Burns plays the hokey sidekick, ‘Hank York, a Wanderer’, and he in turn has his own sidekick (who says only Ug but does all the work panning for gold in California while Hank whittles and sings). This is Pawnee (Bernard Siegel).


John Butterfield figures, played by Clarence Kolb. Butterfield appears as a fellow-pioneer and Wells, Fargo partner. He in fact drives the first St Louis/California stage, with Joel as shotgun messenger. In reality of course John Butterfield (1801 – 69) was a rival. He established his own overland stage route from St Louis to San Francisco and until 1861 had the government contract to carry the mail but in 1860 he went broke, and Wells, Fargo & Company took over the route. Still, as I said above, we don’t want actual historical truth to get in the way of a good story, do we? 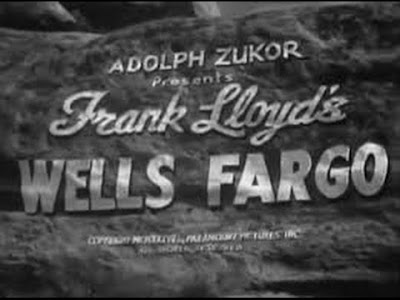 Farrago
Massive amounts of American history are packed in, often dispatched in one line of dialogue or one brief scene. It’s as though the many writers each inserted a line here and there about this or that. There’s quite a good battle when Joel’s large force carrying the gold clashes with the Confederate cavalry but wins out. There are a lot of clumsy shots of actors on those fake horses with back-projected action but at least they avoided the temptation to speed up the film.


McCrea himself had a soft spot for this movie. It was his first epic, and starring with his wife helped. He also admired Frank Lloyd: "I learned more about integrity and sincerity from Frank Lloyd than from anybody else." McCrea was a pallbearer at Lloyd's funeral. As I like Joel McCrea as a Western hero and the movie is quite a big-budget affair, I don’t mind Wells Fargo, but to be honest it is hardly a Western at all but more of a top-hat-and-crinoline drama. You could watch it. If you are at all serious as a Westernista you need to see it. It could have been worse; it could have been directed by Cecil B DeMille, for example. But a great example of the genre I fear it ain’t.