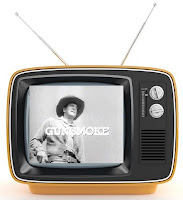 This is the last episode of a three-part post on the TV Western. To read part 1, about the early days of TV oaters, click here. The second part, about the heyday of the genre, is here.


The Western rides off into the sunset


The Sixties, we all know, were a difficult time for America. Assassinations, civil rights injustices, racial tension, Vietnam, feminism, they all seemed to many (poor misguided) people to make the Western less relevant. There was also growing pressure on the TV companies from various bluestocking groups such as PTAs, churches, even the US Senate, to tone down the violence which, said a Senate subcommittee, “can and does contribute to the development of attitudes and actions in many young people which pave the way for delinquent behavior”, although no evidence whatever was presented to justify the assertion that youths were watching Gunsmoke and then going out to loot stores. Given the bourgeois morality purveyed by Western shows, if anything they would have had the reverse effect. But of course they had no effect at all. Anyway, it was the juvenile delinquents’ moms and dads who were watching the Westerns.


Westerns clean up their act


At any rate, Westerns began to change. They were cleaned up and viewers saw less shooting or fisticuffs and there were fewer scenes of saloons and their denizens. And they became more ‘domestic’. The shows that did well were family sagas of one kind another, the Cannon family on The High Chaparral, the Cartwrights on the Ponderosa and Victoria Barkley in The Big Valley. If there wasn’t an actual blood family, Westerns adapted so that there was a family unit. Gunsmoke’s Matt, Doc, Kitty, Festus and, latterly, Newly the gunsmith became one happy family, looking out for each other. Series began to emphasize human concern, tolerance and charity. More children and young adults appeared. All this heart-warming domesticity worked, up to a point. Gunsmoke’s ratings had been in slow but inexorable decline all through the 60s. The average audience, 17 million in 1960 – 61, was, by 1966 – 67, down to 10 million and the series was near cancelation. Once the new ‘cleaned up’ family plots kicked in, from the 1967 – 68 season, it went back up to 14 million, and many of these were new and younger viewers.


Significantly, though, more and more series were canceled and new ones were fewer and fewer. The ones that did launch lasted a season or two at most. In the fall of 1969 no new Western series at all was aired. Under the headline ‘TV Westerns Bite the Dust’, an article in a 1969 edition of Variety said:


A little gunplay, a fist in the gut, an occasional trampling in a stampede, a saloon brawl, a ranch on fire … these have been the lifeblood of the classic American morality tale, and now they’re no longer considered civilized.


Of course violence didn’t disappear from TV screens. Far from it. It just migrated to cop shows. In 1984 the National Coalition on TV Violence (hardly, I agree, the most impartial of commentators) estimated that screen violence had risen 75% since 1980. But Westerns got the blame and TV executives were too sensible, or sensitive, or pusillanimous not to react.


It is interesting to note the prevalence of the language and symbolism of the Western in Vietnam. The generation of Americans fighting there had grown up with Westerns, mostly on TV, and it was no accident that leading celluloid cowboy John Wayne was so high profile there. Troops called dangerous areas “Indian country”, they scrawled on their flak jackets THE ONLY GOOD GOOK IS A DEAD ONE and Vietnamese scouts were called Kit Carsons. It wasn’t new. David Shea Teeple in The American Mercury in 1958 wrote, “Would a Wyatt Earp stop at the 38th Parallel, Korea, when the rustlers were escaping with his herd?” Those who saw the Cold War, and its hotter moments, as simply a struggle between good (the Americans, obviously) and evil (the Commies, obviously) had seen Westerns as an illustrative fable. Time magazine in 1959 argued that the Western was “the great American morality play”, in which “good and evil, … Christian and Pagan fight to the finish on the vast stage of the unbroken plain.” The article added, “In its finest expression [the Western] is an allegory of freedom, a memory and a vision of the deepest meaning of America.”


The Western wasn’t their story


But as the 1960s dribbled to a close, people who saw it in those terms were fewer and fewer. A 1967 show like Custer, with its emphasis on military glory, was hardly in tune with the feeling of the day. Increasingly voices were raised to say that huge numbers of people actually lost their freedom as the West was ‘won’. ‘Manifest Destiny’ entailed the conquest and subjugation of those who had lived for centuries in the ‘empty wilderness’. Native Americans, racial and religious minorities, industrial laborers and women didn’t see the Western as ‘their’ story any more. Westerns, in which the protagonists were overwhelmingly male, white and Protestant, were increasingly seen as anachronisms. Interest waned. And once ratings fall off, TV execs – and their sponsors - are pretty damn quick to axe a show. 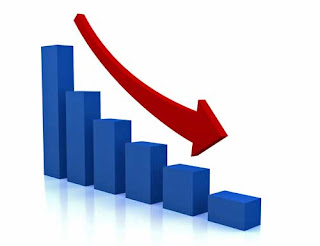 Westerns were launched in the 1970s and a few became reasonably popular. Kung Fu was ranked 82 and Alias Smith & Jones got up to 55 but these figures were a far cry from the huge number of viewers for Westerns in the 50s and early 60s. You’d think the Reagan era would be good for Westerns, but no. By the time we got to the 1980s the genre had all but disappeared, and the few shows that were launched (Bret Maverick, Gun Shy, The Yellow Rose and the like) had very low ratings and didn’t last. It was all over.


Or so we thought.


Death of the cowboy


The 1980s were also the time when big-screen Westerns were pronounced dead. Michael Cimino had almost sunk the genre single-handed with his Titanic-like Heaven’s Gate and studios shyed like unbroken broncs at the idea of splashing out budget on oaters. It wasn’t until mid-decade, 1985, that two film-makers, praise be to them, managed to bring out good and big A-Westerns, Clint Eastwood’s Pale Rider and Lawrence Kasdan’s Silverado, and people began to think there might be a future for the genre after all. And where Hollywood leads, TV will often follow… 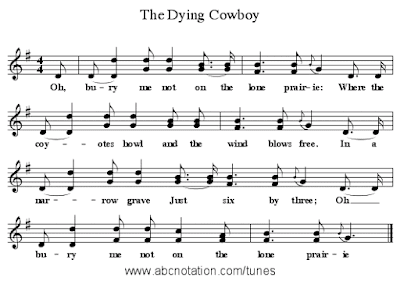 In May 1979 NBC had aired The Sacketts, a two-part adaptation of a series of Louis L’Amour novels, and the Western mini-series was born. The made-for-TV Western movie had already begun to see the light of day. In 1980 CBS’s series The Gambler, with Kenny Rogers, began. And of course at the end of the 80s the perfectly splendid Lonesome Dove showed the way. Suddenly it was TV that had the budget and the time to show adaptations of long novels. Lonesome Dove was followed by several prequels and sequels and they were watched by millions, again. 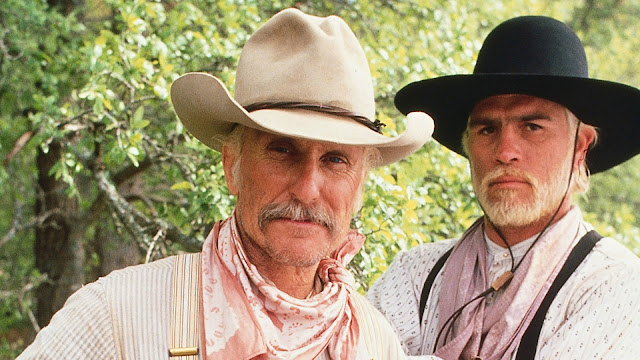 Hallmark and other channels produced made-for-TV Western movies, and still are doing so. These films can tend towards the bland and they aren't always very good. They are, I suppose, the 21st century's B-movies. But Westerns are being made, and, presumably, watched (sponsors wouldn't tolerate them otherwise).

In the 1990s big-screen Westerns like Open Range (in some ways the centenary Western), Tombstone, Wyatt Earp, Unforgiven and Dances with Wolves drew big crowds and some even won Oscars, and the TV execs began to think there was life in the old dog yet. The new Westerns began to show Indians, women, African-Americans, Chinese in a more positive light. And that trend has continued into our own century. Westerns do not come out every week but they don’t do badly. The Assassination of Jesse James by the Coward Robert Ford, the remake of 3:10 to Yuma, Appaloosa, and so on, are all very good films. Blockbuster Westerns have started to appear, like Cowboys & Aliens and The Lone Ranger. Even Quentin Tarantino is making Westerns (Django Unchained, The Hateful Eight). A Magnificent Seven is coming next year.


And new outlets for TV programs, the likes of HBO and Netflix, are producing movies and series. Deadwood was the most shining example, a stunningly good Western in every way. 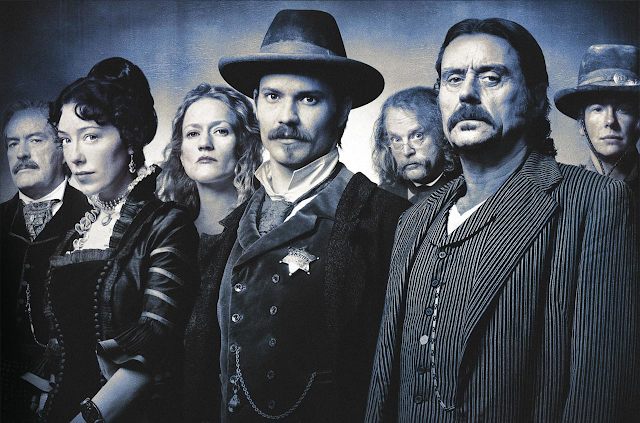 We watch TV Westerns now as downloads, on demand, on the new big screens many of us have or even on the iPad. The Western has always adapted, from the dime novel, to the Wild West show, to the early flickers, to the serials, to TV. And I see no reason why it should not continue to do so. We all want fantasies, about the past, the future. It isn’t called escapism for nothing. To argue, as J Fred MacDonald does, that the Western has become incompatible with modern, urban, technological society is to miss the point. The lives we lead today are precisely why we like stories of simpler, more rural, wilder times.


Assuredly, the ‘inevitable’ death of the Western has been yet again postponed.