The visit to the theater is replaced by the small screen 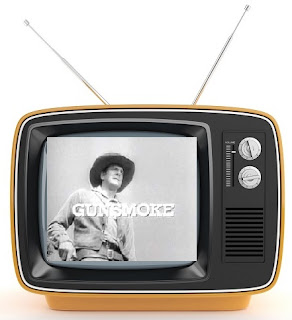 In most ways big-screen Hollywood movies are the best Westerns. Certainly they – and novels - are the forms of the genre that have had the longest history. And true Westernistas (like us) still love them and watch them.


But to a whole generation now aging, let’s say people born in the decade after World War II, the TV was the principal source of our Western input. By the time we were 10 or 12 years old the glory days of the cinematic Western 1950s were over. Theaters showed far fewer Western movies, and matinées of juvenile programmers and serials had all but disappeared by 1960. For us, the baby-boomers now collecting our pensions or about to, a visit to a movie theater to see a Western is, frankly, a rare experience. We watch old movies on sad channels and on DVD but we fall back very often on memories of small-screen cowboys and (more rarely) Indians.


We all had our favorites. Maybe you liked early juvenile black & white series like The Lone Ranger, The Adventures of Kit Carson or The Range Rider. Slightly later you probably watched Davy Crockett, The Adventures of Rin Tin Tin or Hawkeye and the Last of the Mohicans (a particular favorite of mine). And then, as we grew, we got into (relatively) more adult fare such as Gunsmoke (obviously), Have Gun – Will Travel or The Life and Legend of Wyatt Earp. Or maybe you came later to the TV Western and avidly followed 1970s series like Alias Smith and Jones or Kung Fu.


Whatever your preferred viewing, chances are that even if you weren’t a dyed-in-the-wool Western fan (you poor soul) you watched some of them. Literally millions did.


Reports of the death of the Western are exaggerated


And even in recent times ‘mini-series’ and HBO have brought us new interpretations of the genre, from Lonesome Dove to Deadwood, and TV is still feeding us our dose of frontier myth. Many have pronounced the Western dead, and many others have announced that its decline is terminal but it never seems actually to expire. I am relieved to say.


I myself first came to the Western through TV. It was The Lone Ranger. I was five. We did not have a ‘television set’ (as it was called then) but a neighbor did and he kindly invited us in (we were six kids) to watch it. I was instantly entranced. It was utterly gripping. The Lone Ranger and Tonto were surrounded in some rocks with badmen shooting at them. Ammunition ran low until the Ranger had only one silver bullet left… The suspense was palpable. Just then my bossy sister, 10, picked me up bodily, announced that the show as “too exciting” for a boy of my age and plonked me outside the door. And I never did get to find out how the heroes escaped (for they did; they were on again the next week). I think it was this trauma that has driven me on in a lifelong need to see every Western, to find out just what did happen, the how and why of everything. I must remember to ask Dr. Nussbaum about it. 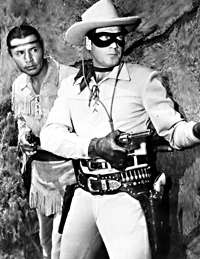 Anyway, I graduated to Hawkeye, as I said, and as a teenager became an assiduous follower of Gunsmoke and Have Gun – Will Travel. Even then I tended to warm more to the bad guys and Have Gun had the added attraction that the hero himself was semi-bad. He was a gun for hire after all, and wore black, even though he was usually depressingly good, helping people out and all. The same with Josh Randall: I mean bounty hunters are bad, right? Roaming the West bringing in outlaws dead or alive, that wasn’t a very respectable profession. He was my kinda hero. Plus, he had a really cool gun. But I don’t know how he made a living; he was always donating his bounty to some worthy widow or famished farmer. Sigh.


Who Shot the Sheriff?


An enjoyable book on the TV Western is Who Shot the Sheriff? The Rise and Fall of the Television Western by J Fred MacDonald (Praeger, New York, 1987). The book has its faults, containing errors (Mr. MacDonald seems to think that John Ford directed Red River, for example) and many typos and misspellings. It occasionally also strays into rather pretentious language, a common fault with writers on movie and TV shows – we are only talking Westerns here, and it’s hardly high philosophy. But overall the book is an entertaining survey of the genre from the early juvenile black & white TV oaters to the present (1987) day. 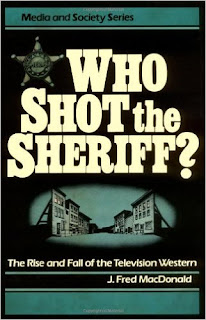 After some high-falutin' introductory remarks on the spirit of the Western and “the Western and American civilization” the author charts the history of the Western on TV from its first effective days in the late 1940s. By 1960, he says, 89.4 per cent of households had a TV and 6 million sets were being produced annually. The average household watched 5 hours and 22 minutes of TV per day. And Westerns were huge. Already by 1951 Westerns were viewed at least once a week in 66.3% of homes with children (the first TV Westerns were aimed at a juvenile market) and even in 39.2% of homes without children. By mid-decade the Western had almost taken over: in 1955 Westerns came fifth in the ratings of prime time popularity, behind variety, situation comedy music and “adventure” but ahead of quizzes and drama, but by 1956 Westerns were top, with an astonishing share of 41.


The first TV Westerns were modeled on and overlapped with the B-movies so popular with juvenile audiences in the 1930s and 40s. An early and far-sighted pioneer was William Boyd, who had by 1948 shrewdly bought up the TV rights to his Hopalong Cassidy movies and also won the right to make new Hoppy films expressly for TV. Boyd had successfully made the transition from a romantic leading man in silent movies (who couldn’t even ride a horse) to immensely popular Western hero. He made 66 movies and became the most admired cowboy star of his generation. 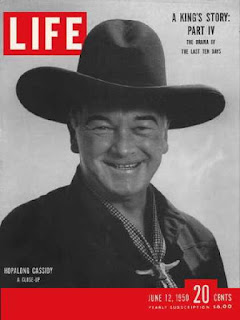 The first shows were cut-down Hoppy movies, tailored to fit into an hour slot with commercials. Beginning locally in New York City and LA, his shows spread rapidly to NBC and nationwide exposure. For a sixteen-month period the series averaged a rating of 32.6 and reached over 4 million homes weekly, and according to the Nielsen ratings was the seventh most popular show on TV.


Hopalong Cassidy was black & white in more ways than one. It operated in a binary moral world where children were encouraged to see only good and evil. Hoppy was a sarsaparilla-drinking patriot, a benign father figure who risked his own life (though not really as he was invincible) fighting for the rights of the good but weak and downtrodden. Of course he never dallied with girls. In fact in all his movies Hoppy only ever kissed someone once, and she was on her deathbed. It was an innocent world, encapsulated by the poem on the inner sleeve of a later Don McLean LP in which he said that


No matter how scary life got I could depend on you


Hoppy set the tone. All early Western TV heroes were patriotic, puritan do-gooders and their shows were didactic and very bourgeois. But that suited the audience of the time and Westerns have always reflected the mores of the generation they are made for. The stars’ codes and creeds were much approved of by the viewers’ parents (who often watched with their bairns). Members of Hoppy’s Troopers Club, for example, had to swear


To be kind to birds and animals
To always be truthful and fair
To never split infinitives [No, I made that one up]
To keep yourself neat and clean
To always be courteous
To be careful when crossing streets
To avoid bad habits [these were tactfully not specified]
To study and learn your lessons
To obey your parents.


Well, there are worse codes to live by, I suppose. Funny that there are only eight commandments. Maybe Hoppy wanted to avoid comparisons.


The ratings success of reworked Western B-movies made TV companies reflect that rather than purchase rights to old studio movies it would be more profitable to make their own. Such shows could also fit schedules more easily and be the length desired. Heroes of theater serials and radio were sought out to star in their own shows, and Republic/radio stars Roy Rogers and Gene Autry were early contenders.


The Cisco Kid, The Lone Ranger and Adventures of Wild Bill Hickok were also early hits. Autry was another shrewd operator: he formed Flying A Productions to produce his own show as well as The Range Rider, Annie Oakley, Buffalo Bill Jr., and even his horse got his own show, The Adventures of Champion. 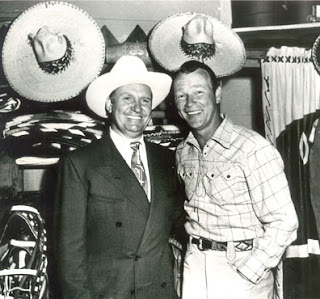 Even though they were making their own shows, TV companies were still dependent on B-movie expertise, and drafted in directors, ators, writers and crew from the old serials and programmers. Don Miller, historian of the B-Western, wrote, “Instead of inventing new techniques of its own, [TV] was content to borrow from the established, conventional motion pictures methods.”


Adventures of Wild Bill Hickok was a good example. It was made by experienced ex-Monogram crew and was done for $12,000 an episode. According to Guy Madison (who was Wild Bill), “We couldn’t waste any time on TV. We made a half-hour show in two and a half days. That included dialogue, action and everything. At one point we knocked off seven films in seventeen days.” 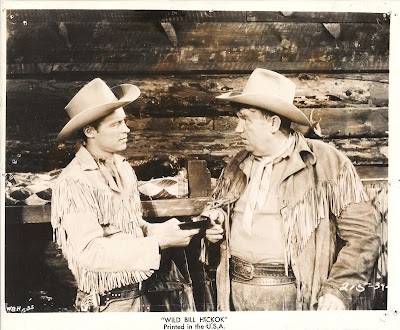 Madison, Bill Williams in The Adventures of Kit Carson, Duncan Renaldo in The Cisco Kid, Jock Mahoney in The Range Rider (another favorite of mine) and, encouragingly, a woman, Gail Davis in Annie Oakley, were all good-looking heroes who had no personal vices, were clearly (if sometimes sanctimoniously) on the side of right and always had the Western savvy and courage to defeat the bad guys. They never actually killed them, of course, preferring to shoot pistols out of their hands or biff them about a bit and hand them over to the local sheriff. For the kids, these heroes were imaginary elder brothers (or sister) to admire and to emulate. The stars’ sidekicks (for they nearly all had them) were less handsome but unquestioningly loyal with almost (but not quite) as much initiative.


Part 2 of this post looks at the heyday of the TV Western and you can read it by clicking here. Part 3, about the decline (but not fall) of the small-screen oater, is here.