I won’t take up much of your time on Kentucky Rifle because it’s so bad.


OK, we all like Chill Wills, but I can’t think of a single other good thing to say about it.


It’s set in an unknown place, ‘the frontier’ (filmed at Vasquez Rocks), at an unknown time (but the era of single-shot rifles and vaguely early nineteenth century costumes). A wagon train proceeds through Comanche country and one wagon breaks down. Scout Chill and his pardner Jason (Lance Fuller, ‘star’ of 50s horror and sci fi C-movies) elect to stay with the wagon while the train moves on, as does a useless preacher (Henry Hull, hamming it up as usual but having difficulty with lousy lines), a couple of other losers and, unbelievably stupidly, two women. The wagon is carrying four cases of twenty-five Kentucky Rifles (rarfles, as Chill calls them) which those Comanches want, and who can blame them.


That’s the plot, such as it is. The trouble is that the movie is so badly written and directed that most of it is spent with the actors all lined up in a row, talking. 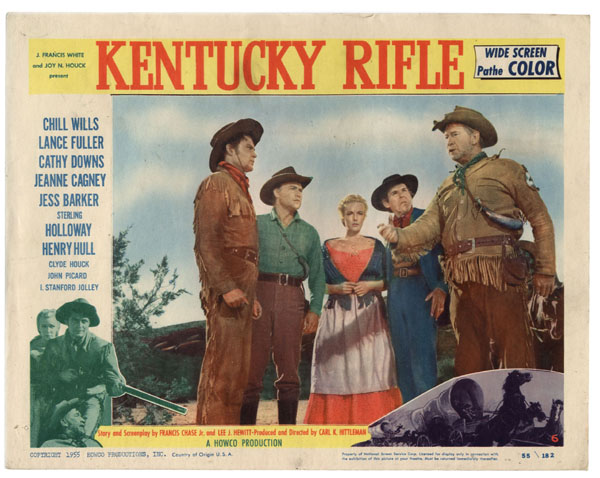 Mostly it's just the actors lined up, talking
It was produced by one Carl K Hittleman. Mr. Hittleman produced a few shockers for Poverty Row studios in the 50s, Westerns among them. He worked with Samuel Fuller, so you can tell they were mostly junk. They had titles like I Shot Jesse James, The Return of Jesse James, Jesse James Meets Frankenstein’s Daughter and Billy the Kid vs. Dracula. You get the picture. Sometimes, as was the case with Kentucky Rifle, he directed and wrote them too. It was not a good idea.


He wasn’t the only one on the set to have no talent. The actors were dire. Perhaps the worst were Cathy Downs as one of the women and Jess Barker as the bad guy who wants to sell out to the Indians. They stand rigid and recite their lines. Badly. It’s painful.


The action moves at about the speed of the broken-down wagon.


Another problem, nowadays and maybe then, is that it is a lousy print. The sound and picture are so bad as to make the movie barely watchable. You have to be a dedicated Western sad-case to get through it. Like me. Even the Indians mostly talk
Even Chill could hardly be termed a giant of the thespian arts. Amusing old codger that he was, he was not exactly Laurence Olivier. He was Oscar-nominated for best supporting actor in John Wayne's The Alamo, amazingly, but he didn’t win. In Kentucky Rarfle he does his thing but…


The stranded party is quite amazingly incompetent. Chill lectures a man on how vital the horses are to save their lives but no one thinks to mount a guard on them. The beasts are there for the Comanches to take.


The American Longrifle, often called the Kentucky Rifle, came into service from the early 1700s on. It was among the first weapons to have rifling and this and the length of the barrel (sometimes as much as four feet, making the whole gun up to 70 inches in length) gave it greater accuracy than the smooth-bored muskets common at the time. The rifles played an important part in the Indian wars and in the American Revolution and the war of 1812, though mostly they were a hunting weapon. But of course they were still single-shot muzzle-loaders and could just about manage two shots a minute at most. They also jammed quite often.

American longrifles
Eminently missable, Kentucky Rifle will nevertheless serve you well if you suffer from insomnia.