The story of the Seminoles is a very interesting one. Related to the Creek, they became increasingly independent of that people, establishing their own cultural and linguistic identity in Florida. In the eighteenth century the tribe was augmented by free and escaped black people. Indeed, the word Seminole is a corruption of cimarrón, Spanish term for ‘runaway’ or ‘wild one’.


When the now independent United States acquired Florida from Spain in 1819, its settlers increased pressure on Seminole lands. During the period of the Seminole Wars (1818–1858), the tribe was first confined to a large reservation in the center of the Florida peninsula by the Treaty of Moultrie Creek (1823) and then evicted from the territory altogether under the Treaty of Payne's Landing (1832). By 1842, to the lasting shame of the US, most Seminoles had been uprooted and forced to move to poor land in Indian Territory, west of the Mississippi River. 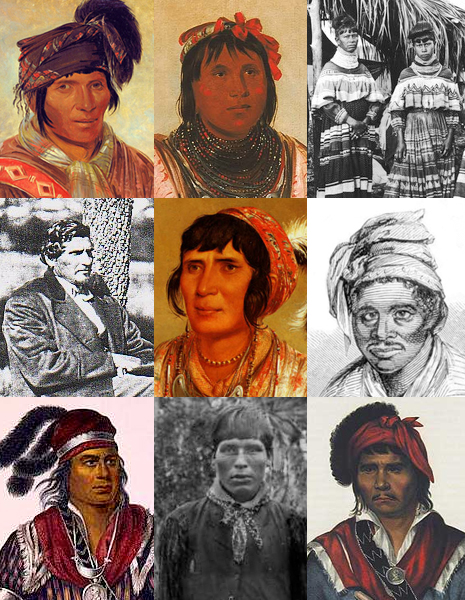 Seminoles
During the Civil War, most of the Oklahoma Seminole allied with the Confederacy, after which they had to sign a new treaty, including freedom and tribal membership for the Black Seminole.


Perhaps fewer than 200 Seminoles remained in Florida after the Third Seminole War (1855-1858), but they fostered a resurgence in traditional customs and a culture of staunch independence. In the late nineteenth century, the Florida Seminole re-established limited relations with the US government and in 1930 received 5,000 acres (c 20 sq km) of reservation lands.


In the early 1950s, Hollywood, tired perhaps of traditional non-specific ‘Indians’ in standard attire from central casting’s costume department, suddenly developed an interest in the Seminoles, and Westerns started to appear featuring them. Or rather, Hollywood rediscovered an interest, for there had been silent movies about the people, such as The Seminole’s Trust (1910), The Seminole’s Sacrifice (1911) and The Virgin of Seminole (1923).


There were three mainstream full-budget films about the whites’ wars against the Seminoles, all historical bunkum. They were Warners’ Distant Drums in 1951, Universal’s Seminole in 1953 and Columbia’s Seminole Uprising in 1955. The first was directed by Raoul Walsh, written by Niven Busch and starred Gary Cooper, so it ought to have been the best, but it was a farrago, a typical stodgy Warners early-50s dud. The second, helmed by Budd Boetticher and starring Rock Hudson, was probably the best, though hardly great art. The last was a poorly cobbled-together B-movie with George Montgomery in the lead, and directed by Rin Tin Tin helmsman, the uninspired Earl Bellamy, and it is that one we are going to talk about today (sorry about the overlong intro). 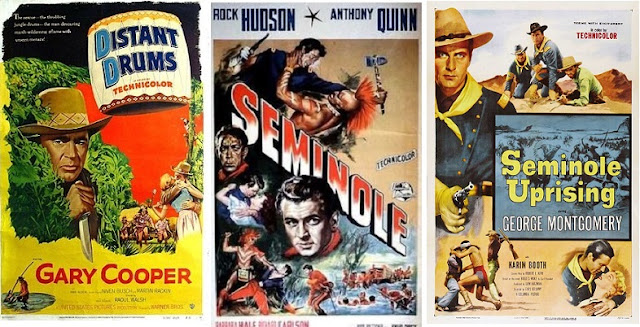 The middle one was about the best, but...
The first thing you notice about Seminole Uprising is that it is two films crudely stitched together and presented as one. Mostly shot on the Corrigan and Iverson ranches in California in quite pastel colors, Columbia then intercut footage of what looks like Arizona locations from some older movie, with a very different film stock and colored garishly. It becomes laughable when the bluecoats are holed up in gray Californian rocks surrounded by green hills and trees, firing at their Seminole enemies in an orange desert landscape a hundred yards away. And it’s supposed to be Texas. Why? The editing (Jerome Thoms) and continuity are absolutely dire. The DP was undistinguished Henry Freulich who worked on a long line of Columbia B-Westerns from 1948 on, including George Montgomery ones.


Then, while the other movies made some attempt to dress the Seminole in their traditional and colorful costumes, very different from Plains Indians or Apaches (Anthony Quinn was very dashing as Osceola in Seminole), in Seminole Uprising the Seminoles look like Cheyennes, with fringed buckskins and war bonnets, perhaps in order that the old film stock could be used. They aren’t Seminoles at all. 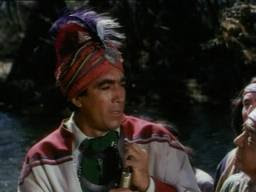 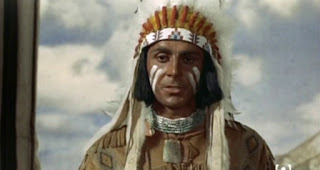 Steve Ritch as Seminole chief in Seminole Uprising
We open the story with brave Lt. Cam Elliott (George Montgomery) reporting to Col. Robert E Lee (Richard H Cutting, in many a Western from 1953 on) at Fort Mason in 1855. Lee tells Lt. Elliott that he, Elliott, grew up with Seminole chief Black Cat, a fact Elliott was presumably already aware of. In fact, everyone says that both Elliott and Black Cat are of mixed race, half-breeds as they are called, though later in the movie Mr. Cat denies this, declaring that as a child Elliott had been found by the Seminole in a wagon train. This of course clears the way for Montgomery to marry the heroine, the colonel’s daughter (Karin Booth) for the very idea of the blonde maid wedding a half-breed would deeply shock the sensitivities of 50s Hollywood – that dreaded miscegenation they went on about. I mean, think of the children!


Anyway, Elliott is sent to the Puertocitas Mountains to track down Black Cat (Steven Ritch, who though not exactly of Native American heritage – he was from Rhode Island – made quite a thing of playing Indians in Westerns) and get him “back on the reservation,” though which reservation, where, is not stated.


So off George rides, accompanied by his crusty old sidekick Cubby, a sort of Gabby Hayes/Walter Brennan part, though played straighter and less for old-timery humor. As George is an Army officer, sidekick Cubby is a civilian scout. Cubby was played by William Fawcett, a PhD and former professor, not the most common background for old-timer sidekicks in Westerns but well, why not? Fawcett was in literally hundreds (nearly 400) B and TV oaters and was always rather professional in them. He’s a cut above the usual comic sidekick. 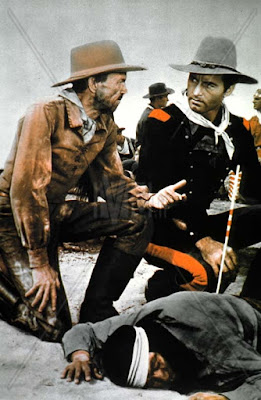 William Fawcett, PhD, is sidekick/scout
The colonel’s daughter (I should have said, the colonel is played by B-movie actor and serial bridegroom Howard Wright, bit parts in most Western TV shows) is a dumb blonde. It wouldn’t be PC to call anyone that now but this was 1955 and she, Susan, is doll-like, over made up and plain silly. And rather wet. She gets herself kidnapped by Black Cat, which helps the Hollywood plot but is otherwise all rather tiresome. Ms. Booth (five B-Westerns and a couple of TV ones) isn’t a very good actress and the part she is given is lamely written, so all in all it doesn’t work out too well. 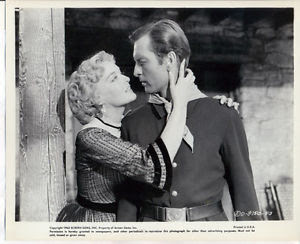 Unluckily for him, he finally gets the gal
The screenplay, by the way, is by Robert E Kent (28 very B-Westerns) from a Curt Brandon novel, and it’s clunky and ponderous.


Susan used to be in love with George, and still flirts with him though engaged to rotter/cad Capt. Dudley (Ed Hinton). We immediately know that Capt. Dudley will be killed and Susan will go off with our hero, and this duly occurs in the last reel, about the last 30 seconds in fact.


This film really isn’t very good. Montgomery did some reasonably good oaters for Columbia. But this isn’t one of them.