The second of Anthony Mann's Westerns and if not the greatest, still a very fine film

In 1950 Anthony Mann moved from his famous noir thrillers to Westerns. In that year alone he made three, Devil’s Doorway, The Furies and Winchester’73 (Winchester was made after the other two but released before). Depending on your definition of a Western, eight or nine followed, finishing with Cimarron in 1960, the whole constituting a hugely important body of work and major achievements in the Western genre. 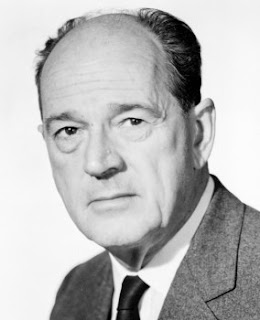 Anthony Mann, one of the greatest ever directors of Westerns
The Furies was based on a recent book of the same title by ex-editor of Time magazine turned screenwriter and novelist Niven Busch. Busch had already had a hit with Duel in the Sun and now had a (in some ways) similar tale of passion and death in the West in the best-seller lists. It was an interesting choice for Mann. On one level little more than a rather torrid ‘family saga’, Mann saw that the story contained much more: murder and intrigue, passion and conflict, with the central character making a journey, though this time a psychological rather than a physical one, developing and changing against a wild backdrop. It was in many ways ideal material for the director and despite its Western setting the movie is a classic film noir. 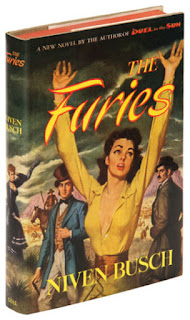 The 1948 novel
Interestingly, though, unlike Mann’s other Westerns, in this one the central character was a woman. The casting of Barbara Stanwyck as Vance Jeffords (her surname has grown an –s from the novel) had a certain inevitability to it. The then Mrs. Robert Taylor (Mr. Taylor had starred in the Devil’s Doorway) had a big reputation for ‘strong woman’ parts. This was of course well before The Big Valley but she had done quite a few Westerns, starting as Annie Oakley in 1935 and notably taking the female lead opposite Joel McCrea in the epic Union Pacific in 1939. She had also been in semi-Westerns, pot-boilers really, in 1942 (The Great Man’s Lady) and 1947 (California). So she had some form in the genre.

The casting is a slight problem for me personally, though, because I don't care for her. She was ugly, had stupid hair and was too often a harridan in her films. Still, that’s only me and loads of people liked her and probably still do. She was in her mid-40s when she did The Furies, so a bit anno domini for the part (Vance is 19 in the book), but that’s Hollywood for you. Actually, the role suited her style of acting very well. In some ways Vance is a feminist’s delight, being strong, intelligent and determined – and the central character in the story. At the same time, she defines herself in the book almost solely in terms of the three men in her life, her husband, her lover and, especially, her father. But there’s plenty of passion around and quite a bit of raging to be done, which was right up her street, and more than a hint of almost megalomaniac ‘I own the whole valley’ rancheress, which she made her specialty (The Big Valley, Forty Guns, The Violent Men, etc.) 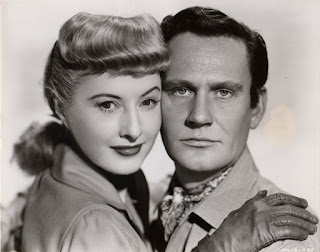 Barbara Stanwyck with second-billed Wendell Corey
Mann (or Paramount) went for the epic approach right from the get-go. The intro text tells us that


This is a story of the 1870s in the New Mexico territory when men created kingdoms out of land and cattle and ruled their empires like feudal lords. Such a man was TC Jeffords who wrote this flaming page in the history of the great Southwest.


The book was set in the late 1880s into the ‘90s but never mind. Perhaps the earlier date made it more pioneering. Set in New Mexico, it was shot in southern Arizona, as the many saguaros attest.


Actually, the photography is one of the strongest points of the film. Victor Milner (The Plainsman, Union Pacific) and uncredited Lee Garmes (Duel in the Sun, The Lusty Men) worked with Mann to produce a luminous black & white Southwest, much of it shot at night, with Mann’s beloved mountains oppressively hemming the characters in or giving them dominance and height. There are also oppressive interiors. The art director was the talented Henry Bumstead (four films for Hitchcock, thirteen for Clint Eastwood, including Unforgiven). There are slightly odd camera angles typical of Mann, and much use of silhouettes. Visually, the film is superb, and Milner was justly nominated for an Oscar for the movie. 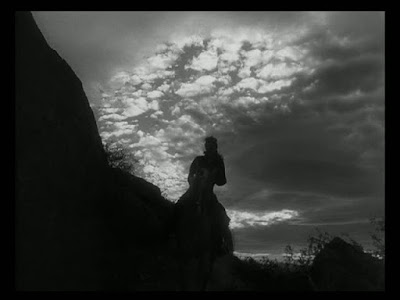 Victor Milner cinematography, Mann-ish composition
There’s more than a hint of an Electra complex, which suited the fashionable psychowesterns of the day (think Pursued). The brother, Clay (John Bromfield), an amalgam of brothers Dan and Clay in the book, is weakly jealous and marries into a safe, quiet life while Clay’s younger sister Vance is daddy’s favorite and a chip off the old block. Does she love her daddy just a tad too much? There are dark hints of this. 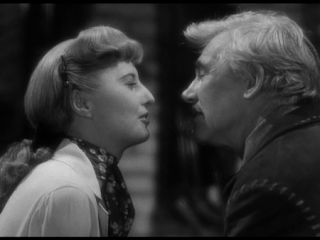 Stanwyck as Electra
TC being a widower, Vance has no mother to compete with, in Jungian terms, but once her father’s mistress Flo Burnett (a wonderful performance by Judith Anderson) appears and is taken to wife, the cat really is among the psychosexual pigeons. Anderson was famous for her stage Medea in 1948 and the part in The Furies (the very title has a Greek ring to it) suited her to a tee. The Stanwyck/Anderson climactic scissors scene is more than Hitchcockian; it’s Mann at his masterly best. 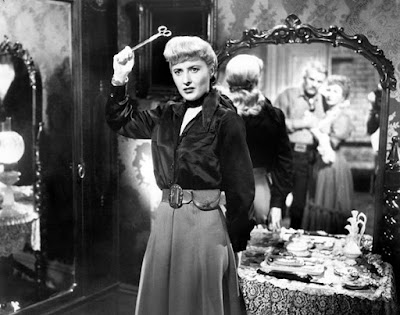 Violence, mirror - pure Mann
The choice of Walter Huston to play magnate TC Jeffords was also a master-stroke. It’s a larger-than-life part in the book and needed a really dominant alpha-male type to play him. A splendidly malevolent Trampas in the 1929 The Virginian, the Earpish Saint Johnson in the 1932 Law and Order and the Sinkiller in Duel in the Sun (we will quietly forget his Doc Holliday in the perfectly dreadful The Outlaw in 1943), Huston had two years before The Furies won an Oscar for his wonderful Howard in the great picture directed by his son John, The Treasure of the Sierra Madre. He is magisterial in The Furies, as is right and proper. 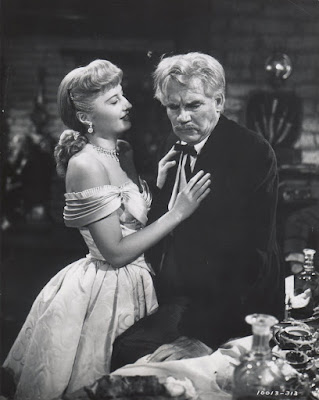 Walter Huston: magisterial
Curley Darragh, gambler, saloon owner and racing man, Vance’s flawed lover in the novel, has disappeared and been replaced by Wendell Corey as Rip Darrow, banker, and a new plotline has been introduced for him, making him want to reclaim a strip of land on the Jeffords ranch which once belonged to him. OK. Wendell Corey isn’t bad in this part. For me he isn’t quite ‘dubious’ enough, and there’s no sign in the Legal Tender of his hunchbacked shotgun guard Hunchy, nor does Vance take over that job when Hunchy disappears (perhaps that was a masculine step too far). Corey was a protégé of Furies producer Hal B Wallis, which perhaps explains why he got second billing, even over Huston. This was his first Western; he did a few more Bs and some Western TV shows later (he was Jesse James in Bob Hope’s Alias Jesse James) but he wasn’t what you would call a specialist Western actor, nor was he really all that good. 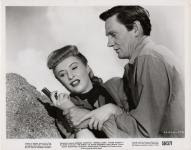 "A dainty little derringer"
If the novel’s title gave it an ancient Greek ring and TC and Vance are furiously pursued by the fates, in Mann’s movie a more literal use of the title has been employed, as the name of the huge ranch is no longer the Birdfoot, as in the book, but The Furies.


As Stanwyck’s Vance could hardly be a young girl, so the lover she dismisses, Juan, could not really be a boy. They cast Gilbert Roland in the part, perhaps because he was Hollywood’s tame Mexican, and I like Gilbert Roland. He was very dashing in a number of Westerns. But he was born in 1905 and sadly he’s not quite right for the role, though he acts with power and, when it comes to his death by hanging, very movingly. She doesn’t flee to him after the attempted murder and marry him, as in the book, so he’s a slightly lesser character. He clearly loves her in the film but she just treats him as an ally. “That was the kiss of a friend,” he says to her, dolefully. Ideally, both Darrow and Juan would have borne some physical resemblance to Huston’s TC: it would have been creepily appropriate and give more credence to the attraction Vance has for them. Maybe Roland and Corey do look like younger Hustons a very little.


Sadly, also, there’s no Quintinella. Quintinella was one of the great creations of the book, a marvelous Western character, the foreman, a deaf-mute, murderous Mexican charged by Vance with clearing out the settlers from the open range. He has become El Tigre in the film (Thomas Gomez – you might remember him from Pony Soldier or The Gambler from Natchez), neither deaf nor mute, and a paler, fatter and altogether more insipid character. In fact the Mexican mamacita is a better part, Juan’s ma, we presume (Blanche Yurka) who looks excellently sinister aiming her rifle.


Still, we do have the excellent Frank Ferguson as Dr. Grieve, Albert Dekker as Reynolds and Arthur Hunnicutt as a cowhand, so we can’t complain. At one point there is also what is called “a dainty little derringer”, so I’m happy.


Certain key scenes of the book are played down or omitted (e.g. TC throwing the $50,000 into the stove) and others are built up: on reading the book I hadn’t given due symbolic importance to TC’s throwing of the old bull. Mann and Huston handle this brilliantly and give the scene the spotlight which I now see that it deserved. 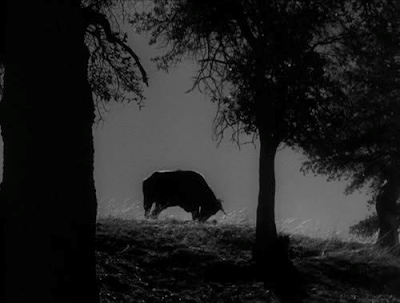 One old bull challenges another
The last scenes of the film are a bit cloying and you wonder if Paramount insisted on a happy ending. The book doesn’t have one, nor is such an ending appropriate. Greek tragedy about fate and the fall of a great house should not end happily ever after, nor should a sort of Western sub-Lear tale of death and destruction. Mann often talked about King Lear and many characters in his Westerns had Learish qualities: Lee J Cobb in Man of the West or Donald Crisp in The Man from Laramie, for example, though in The Furies Vance seems to be Cordelia and Goneril combined.


Mann (like John Ford) always stressed the importance of the visual over the words. In an interview he cited the silent movie Tabou, directed by FW Murnau, as a prime influence (not a film I’ve seen but I’ll take Mann’s word for it that passion, love and death can be rendered powerfully without words). “It’s a sight medium,” Mann said. “It should be a picture, it should be action.” You can see this in The Furies (indeed, in all Mann’s Westerns). His daughter Nina also said that “the hero [of his films] was always in conflict” and that is also certainly true.


Mann thought too that violence was an essential ingredient. He had spent the ages of three to thirteen in a kind of commune where a brutal staff member had punished him by dunking his head in a bucket of water. The scene where Darrow does that to Vance is very powerful and must have meant a lot to Mann. 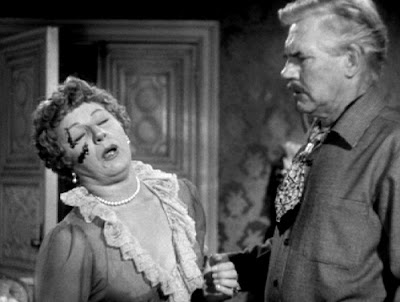 Judith Anderson magnificent as the wounded stepmother
I think all Mann’s Westerns (with the possible exception of The Last Frontier and Cimarron) were absolutely superb and he added enormously to that most American, yet most universal of stories. Unlike John Ford’s Westerns, Mann’s are not essentially about the American mythology of the West, though. They were more about existential struggle. The Furies, his second essay in the genre, is a very fine film indeed. 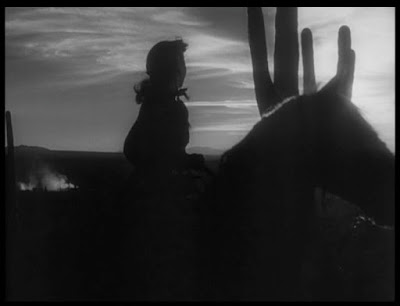