John Clum in fact and fiction


Clum is quite well known to Western fans because he appeared often in movies and on TV, usually in the context of Tombstone because he became editor of The Tombstone Epitaph, mayor of the town and a lifelong friend of Wyatt Earp. In both versions of Frontier Marshal he appeared, thinly disguised, played (as ‘Editor Pickett’) by Russell Simpson in ’34 and by Harry Hayden (as ‘Mayor Henderson’) in ‘39. Emmett Vogan played the part of ‘Editor John Clum’ in Tombstone, the Town Too Tough to Die in 1942. Roy Roberts was the unnamed Tombstone ‘Mayor’ in My Darling Clementine in 1946 and Whit Bissell was ‘John P Clum’ in Gunfight at the OK Corral in 1957. Stacy Harris was ‘Mayor John Clum’ in The Life and Legend of Wyatt Earp on TV. In Hour of the Gun (1967), Doc (1971), Tombstone (1993) and Wyatt Earp (1994) Clum was played by Larry Gates, Dan Greenberg, Terry O’Quinn and Randall Mell, respectively. That’s a lot of Clums.


But the only movie portrayal to concentrate on Clum’s work (which he considered his chief achievement) as Indian Agent on the San Carlos Reservation was Walk the Proud Land, in which he was played by Audie Murphy. 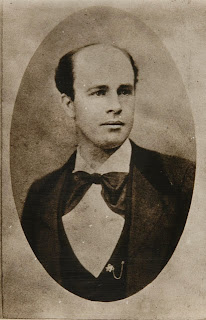 John P Clum, known to the Apaches as Nantan Betunnikiyeh, or chief with high forehead, because of his incipient baldness 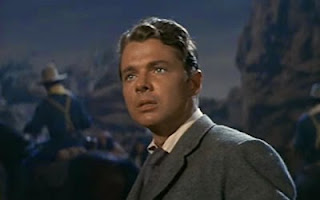 
The movie opens with the pronouncement “The story you are about to see is true” so of course alarm bells ring and we brace ourselves for a lot of historical tosh. As I have often said before, I do not expect accurate history from Western movies; that’s not what we watch them for and I am perfectly happy to put up with a lot of bunkum from a factual point of view. But movies that claim that they are historically accurate must expect to get it in the neck when, as is nearly always the case, they are not.


In many ways this is a classic 1950s Universal Audie Western. High production values belie a slight ‘B-ness’: Cinemascope color with appropriate Old Tucson locations nicely shot by Harold Lipstein (5 Audie Westerns but also Pillars of the Sky, Wichita and Chief Crazy Horse, all visually excellent), a screenplay by Jack Sher of Shane fame based on the Woodworth Clum bio, and all directed by Jesse Hibbs, who helmed the 1950s version of The Spoilers. Audie is noble and decent, as ever, gaining the day and getting the girl. 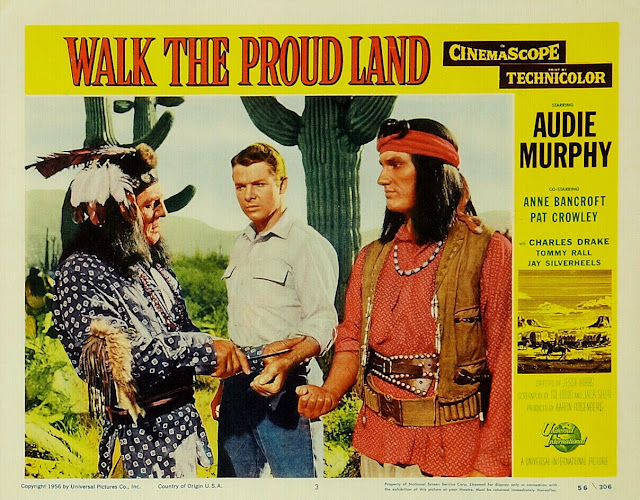 Earnest, slightly plodding perhaps but in the last resort a good film
But in other ways, Walk the Proud Land is a bit different from the run-of-the-mill usual Audie oater. It is a biopic, and the most ‘historical’ of Murphy Westerns, even if it takes considerable liberties.


We start in Tucson, Arizona in 1874, with a respectable Eastern Audie in a suit and a derby. Though not a minister, he has been nominated as a leading member of the Dutch Reformed Church to become Indian agent. This was in fact the historical case: the San Carlos reservation had been established in 1872 but had already had a number of corrupt agents who lined their own pockets at the Indians’ expense. After an investigation of political abuses within the Office of Indian Affairs, the government of President US Grant gave religious groups (Protestant ones, of course) the responsibility for managing the Indian reservations, and the Dutch Reformed Church was given charge of San Carlos.

Agent Audie
From the start Clum shows himself to be on the Indians’ side and willing to treat them with respect and as fellow humans. In the semiotic way Westerns have, Audie’s Clum is shown being friendly to first some small boys, then some dogs, so is clearly a goody. This brings him into conflict with the Army in the form of a General Wade (Morris Ankrum) a two-dimensional villain as scowling as he is short-sighted. Clum’s no pushover, though. When he finds the Apaches brewing tizwin he kicks over the cauldron and gets into a fistfight with good old Anthony Caruso. He changes his Eastern suit for Western duds and gradually adapts to the 1870s Arizona way of life. 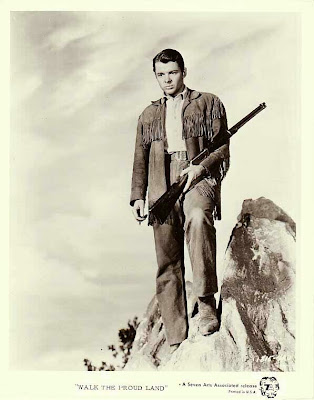 In slightly more action-hero mode
He sets up an Apache tribal council and an Apache police force. “I’m not here to rule the reservation but to help you rule,” he tells Chief Eskiminzin (Robert Warwick, who had first appeared in a Western in 1914 and often played Indian chiefs, though sometimes changed sides and donned a blue uniform). So far, so quite factual.


But of course there has to be love interest and so Eskiminzin provides an Indian maid, Tianay, to, er, cater to his needs. But Audie is Audie and this was the mid-1950s, so no hanky-panky, obviously, though Clum’s fiancée Mary arrives from the East and suspects both hanky and panky. She should have known. Mary is played by Pat Crowley, ‘safe’ and respectable actress who had nevertheless appeared in Red Garters with Rosemary Clooney a couple of years before; these were to be her only big-screen Westerns, though she appeared in many TV oaters. Tianay is Anne Bancroft, no less, getting second billing after Audie. This was her third Western, after co-starring with Van Heflin in The Raid and then playing Robert Preston’s Army wife but falling for Victor Mature in the Anthony Mann-directed The Last Frontier. The year after Proud Land she starred with Scott Brady in The Restless Breed. That was about it as far as Westerns were concerned (she was pipped at the post by Debra Paget for the part in The Last Hunt), and she didn’t always shine in the ones she did do, but well, she is Anne Bancroft after all and so definitely worth a watch.

Anne Bancroft as the Indian maid

Pat Crowley as the posh Eastern fiancée
Charles Drake is entertaining as ex-Sergeant Sweeny who becomes Clum’s right-hand man, though really prefers to be fighting in a saloon.


Clum is given a saloon fight and wears buckskins and much is made of his capture of Geronimo. Well, it is a Universal Audie Western, so what did you expect? Everyone’s pants are belted just under their armpits, in that 1950s way.


“Geronimo, you’re under arrest!” trumpets Clum to the Apache leader, and the agent claps the chief in chains. Geronimo is played by the excellent Jay Silverheels and he did rather corner the market in playing that Apache renegade, having portrayed him in Broken Arrow in 1950 and The Battle at Apache Pass in 1952.


The Governor of Arizona Territory, Anson Safford (Addison Richards, another old hand), sees the wisdom of Clum’s ways and comes round to supporting him. But the Army remains resolutely antagonistic.


The film is definitely in keeping with the Broken Arrow-style of pro-Indian movie of the 50s and is worthy for that reason. Indeed Clum is a sort of Thomas Jeffords figure in the story. It’s not action-packed but that’s good: we wouldn’t have believed a Clum winning the West with sixguns. Murphy’s Clum is sober and dignified.


Well, a state of emergency is declared and the Army is back in charge. In reality, Clum got support from hardly anyone. The government did not back him up, and certainly not the Bureau of Indian Affairs. The Army hated him and many Arizonans mistrusted such an “Indian lover.” In the movie Clum quits but Eskiminzin tells him, “If you go, we are lost,” so Clum changes his mind, and he and wifey, who has seen the error of her ways, resume the Agent’s life. (He would have been better off with la Bancroft but we can’t change things that much). In fact, of course, he left San Carlos in July 1877, three years after his arrival, and moved to Florence, AZ, editing a newspaper, then went to Tombstone, and the rest, as they say is, if not history, then Hollywood history anyway. Clum’s successors as Agent at San Carlos were the corrupt men of the bad old days. 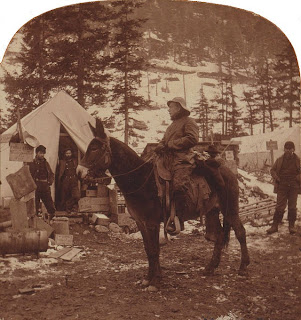 Clum as postmaster in the 1890s
In 1898 Clum was appointed Postmaster in the Alaska Territory. While in Nome, Alaska, in 1900 he met up with his old pal Wyatt Earp, who was running the Dexter Saloon there. Like Earp, Clum eventually retired to the Los Angeles area and like Earp, he died there an old man, in Clum’s case in 1932 at the age of 80. It was a fascinating career. 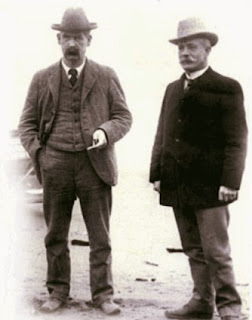 Clum (right) with Wyatt Earp in Nome, 1900
You do need to see Walk the Proud Land, despite its lack of historicity, but anyway, though some facts are distorted, you do get the feeling that they got the overall tone right. Clum really was a gutsy and decent man who did his best for the Apache.