In a year which produced mighty Westerns such as Fort Apache, Red River and The Treasure of the Sierra Madre, towering examples of the genre all, dear old Panhandle was very much at the lower end of the food chain. Allied Artists was a transmogrification of the Poverty Row studio Monogram. Monogram producer Walter Mirisch had great ambitions and wanted “B-plus” pictures, even, gasp, in color. At a time when the average Hollywood picture cost about $800,000 and the average Monogram picture cost about $90,000, AA's first release, It Happened on Fifth Avenue (1947), cost more than $1.2m. At the same time, though, movies with low budgets and production values continued. Monogram had a rep for action films and did a lot of cheap Westerns. There was the odd good one but many of them were pretty poor fare, to be honest. 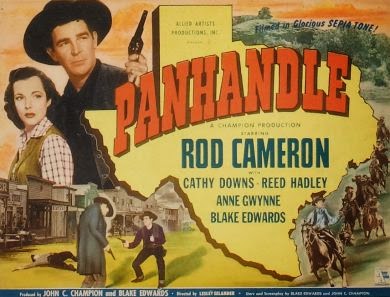 Panhandle was a rather typical example. It starred Rod Cameron. Canadian Cameron was 6’4” and rugged, and got bit parts in Hollywood from 1939 on. His very first Western role was as an uncredited cowhand in Paramount’s Lesley Selander-directed Zane Grey tale Heritage of the Desert and he was in the Cecil B DeMille farrago North West Mounted Police, in which he (sort of) fulfilled his boyhood ambition by being a Mountie. He was Jesse James in Paramount’s non-Western but entertaining The Remarkable Andrew in 1942 (the Andrew in question was William Holden). His first Western lead was in The Old Texas Trail in 1944, very much a B, and many Bs followed. He did a series of pretty awful Westerns for Universal with fellow Canadian Yvonne De Carlo (stuff like Salome Where She Danced and Frontier Gal). Panhandle was his nineteenth outing in the saddle and he was used to the gunbelt and Stetson by then. By and large I like Rod in Westerns; though not exactly charismatic, he was a good tough guy. 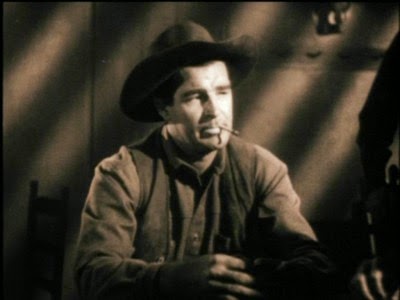 Like Rod’s first oater, and several others afterwards, Panhandle was directed by Lesley Selander (oddly billed on screen as ‘Leslie Selander’). Mr. Selander was definitely one of the better B-Western directors, espeially good at action scenes. In a Western career that lasted from 1925 to 1968 he made 184 big- and small-screen oaters, nearly all Bs but often with good Western stars and all well-constructed, fast-paced and fun. Respect.


The story is about famed gunfighter John Sands (Cameron) whose brother, the even faster Billy, has been killed. As is traditional with heroes as gunfighters, both wanted to hang up their irons and lead peaceful, respectable lives. Billy had in fact become a newspaper editor, and John is now a storekeeper. But we just know that Rod will be obliged to strap on those Colts again, to do a spot of avenging.


Evil Matt Garson (Reed Hadley) is the crooked town boss in Sentinel and he wants the whole Panhandle as his personal fiefdom. You can tell he is a bad guy because he wears a suit and has a caddish mustache. His boots are pretty damn fancy though. Obviously, for such overlords rarely do their own dirty work, he has ruthless henchmen. One of these is gunslinger Floyd Schofield (maybe named for his Smith & Wessons). 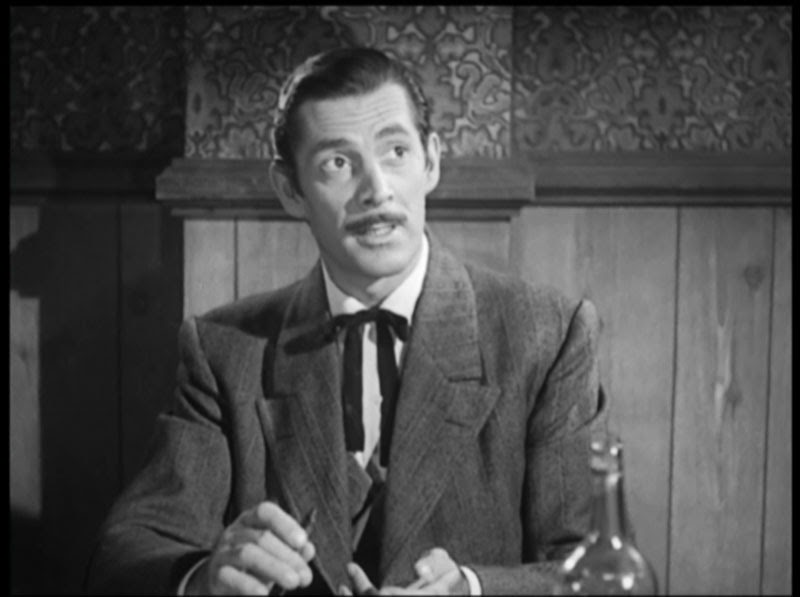 Schofield is played by Blake Edwards, the Breakfast at Tiffany’s and Pink Panther fellow, who was to have such a stellar career as director and producer (and Julie Andrews’s husband) and whose real name was the rather more colorful William Blake Crump (he should have stuck with it). What’s more he co-wrote and co-produced Panhandle. Actually, Mr. Crump understood the Western: he directed William Holden in Wild Rovers and James Garner as Wyatt Earp in Sunset, both endearing films. In Panhandle he certainly had fun as the gunman. There’s a character named Crump in it, too.


Hadley is good as the mean town boss. B-Westerns were almost obliged to have such a figure. Often they were saloon owners (this one has The Last Frontier as his base of operations) and used derringers. They almost invariably had mustaches. Although many remember Reed from Racket Squad or Public Defender on TV, he did a lot of Westerns. He was Zorro in Republic’s serial and Red Ryder on the radio. Altogether he made 44 appearances in film and TV Westerns, from 1938 on, and you may remember him as Jesse James (like Rod) in the rather trashy Samuel Fuller-directed I Shot Jesse James (John Ireland was Bob Ford) or as a James again, this time Frank, in The Return of Jesse James in 1950. I thought he was good in the Lippert B-pictures Rimfire and Little Big Horn.


There are, of course, two dames for the hero to hover between, the spitfire rancher Dusty (Cathy Downs) and the glam but still feisty June (Anne Gwynne). It turns out that Dusty had been engaged to brother Billy before Reed heartlessly murdered him. 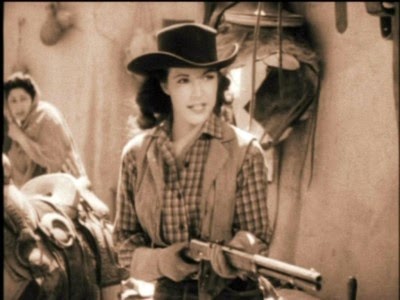 Well, there’s a good gunfight between Rod and the henchpersons in the rainy street, and then with Reed. And Rod goes off with the beautiful… Well, you’ll have to watch it and see.


Don’t get me wrong, this is far from a top-drawer Western. It’s only really late-40s black & white fodder for the horses. Furthermore, the print is pretty lousy these days. But it does have its touches and it would repay a watch, if you are, like most sensible people, a Western fan.