As a juvenile Western fan in the 1950s and 60s I had a problem with Fred MacMurray wearing a gun. To me he was the absent-minded professor and whenever I saw him I could only think of flubber. So the very idea of him ridin’ the range and getting into gunfights was totally preposterous. As the (many) years have passed, however, I have gradually re-evaluated MacMurray’s sixteen oaters, from his first, The Texas Rangers in 1936, to Face of a Fugitive, his last Western, in 1959. I now think he was really rather good in them. Tough and craggy-faced, he came across as a hard man, but with a streak of decency in him – the ideal make-up for a Western hero. 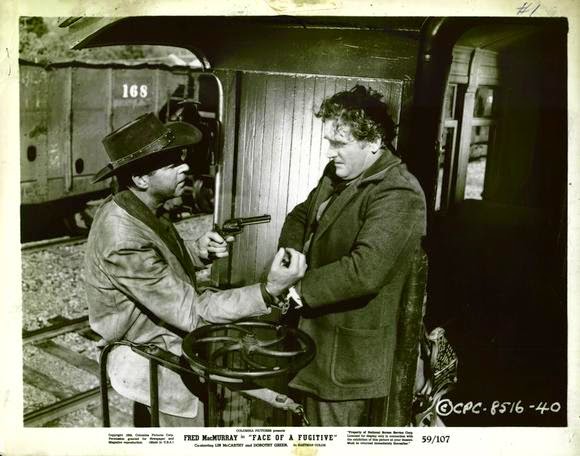 Fred escapes from custody
Face of a Fugitive was directed by Paul Wendkos for Columbia. Wendkos had been hired by Harry Cohn on the strength of The Burglar, a 1957 low-budget noir, and Fugitive was his first big-screen Western, and indeed his only one until the very uninspiring Guns of the Magnificent Seven sequel in 1969. One wouldn’t put him in the top rank of Western directors. Still, with MacMurray he created an atmospheric film with a somber note to it and quite a bit of toughness. 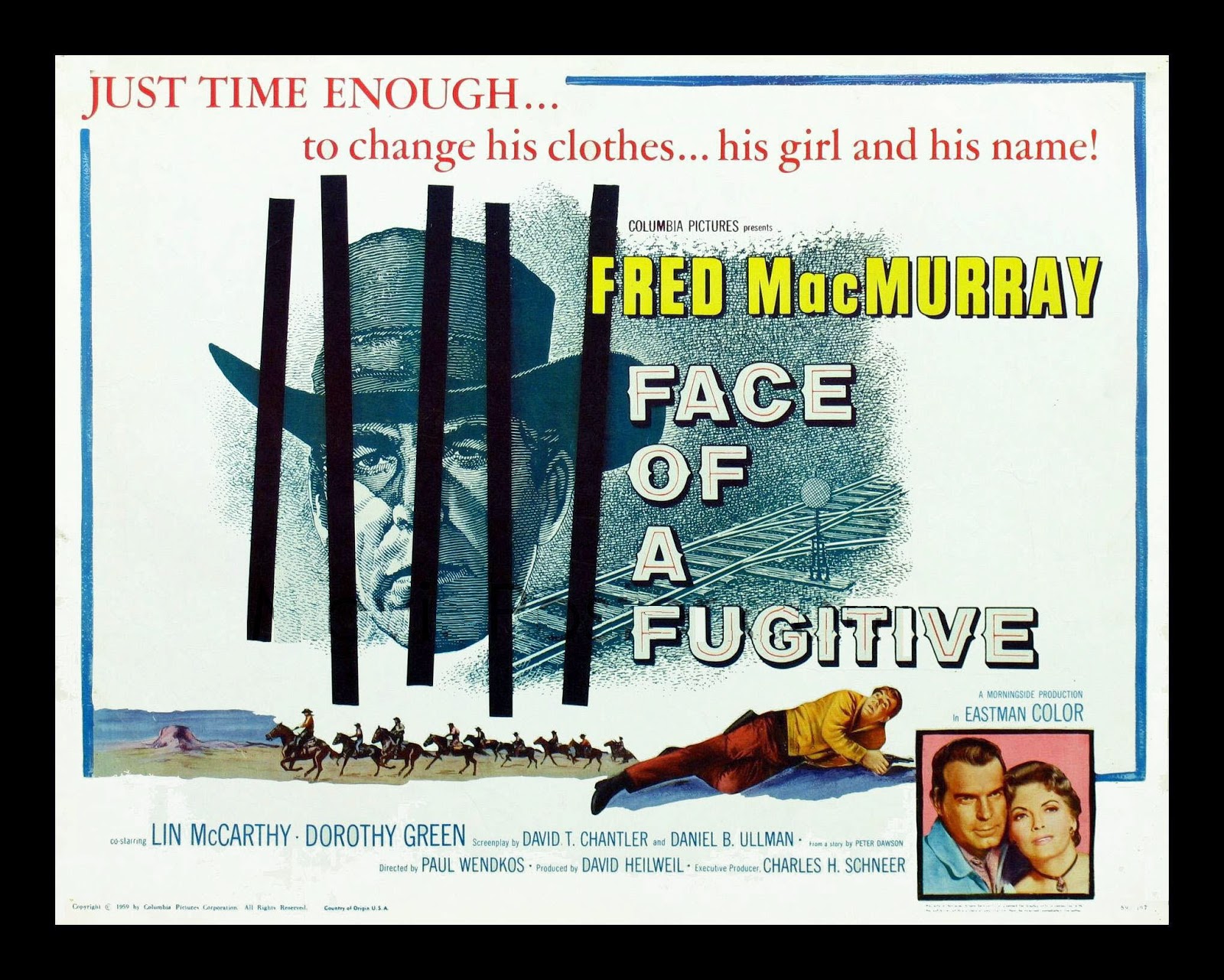 David T Chantler and Daniel B Ullman wrote the screenplay from a Peter Dawson story, and it isn’t bad. Although Chantler was not a Western specialist, ‘Peter Dawson’ was in fact Luke Short’s brother and wrote in a similar way (praise indeed). Ullman was an enormously experienced hand at penning oaters, for the big and small screen, having started work on the Randolph Scott picture Return of the Bad Men in 1948 and contributing to a total of 219 Westerns right through to Wyatt Earp: Return to Tombstone in 1994. The story opens with a man (MacMurray) manacled to a lawman but the prisoner then escapes with the aid of his younger brother (Ron Hayes) and comes to a town where he is unknown – for the moment, until the wanted posters with his picture get there. Of course he meets a beautiful woman, a redhead widow (Dorothy Green) and with her and her little daughter (Gina Gillespie) they form a kind of family unit, like Henry Fonda in The Tin Star, John Wayne in Hondo, Clint Walker in Yuma, and countless others. We all know that being nice to animals or children in the first reel established the hero’s goodness regardless of his outlaw status. 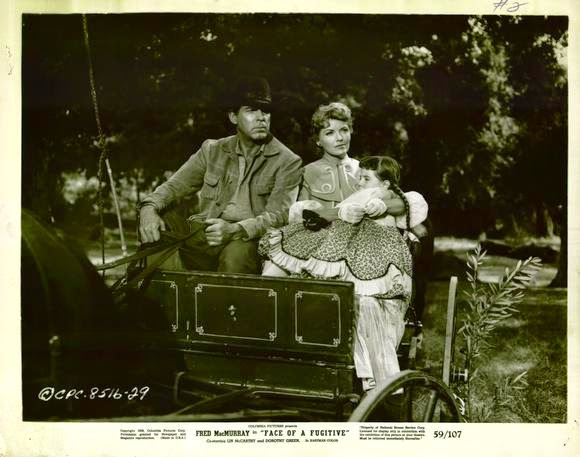 Family unit
There’s a proper train, some nice Jamesown, California locations shot in “Eastmancolor by Pathé” with Wilfred M Cline behind the lens, and a (rather dark) Jerry Goldsmith score, so that’s all good.


There’s a ruthless rancher, of course, the kind who wants the whole valley, you know how they do. “Nobody’s gonna take my land away from me,” he says. “I’ll kill the man who tries.” Actually, it isn’t his land at all but he thinks it is. He is played by Alan Baxter (despicable in any number of pictures and Jesse James in 1941) and he has the obligatory henchpersons in the shape of, in particular, a young James Coburn. Actually, for such a small part Coburn is electric and his entry to the dance is stunning. 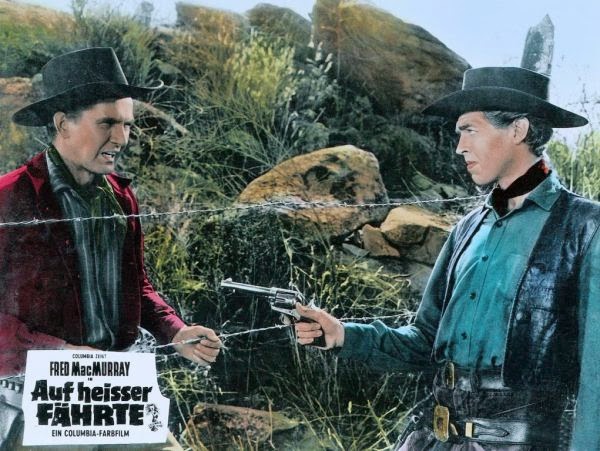 James Coburn noticeably good, even in a small part
The brave young sheriff who is determined not to let the arrogant rancher get away with it, and who is backed up by steely Fred, is played by Lin McCarthy, who was a stalwart of TV Western shows of all kinds but this was his only big-screen Western. He isn’t bad, in fact, and it’s a pity he didn’t do more. Fred’s redhead widow is the sheriff’s sis, which is a bit awkward. The Fred/sheriff relationship is a little like that between Henry Fonda and Anthony Perkins in The Tin Star. 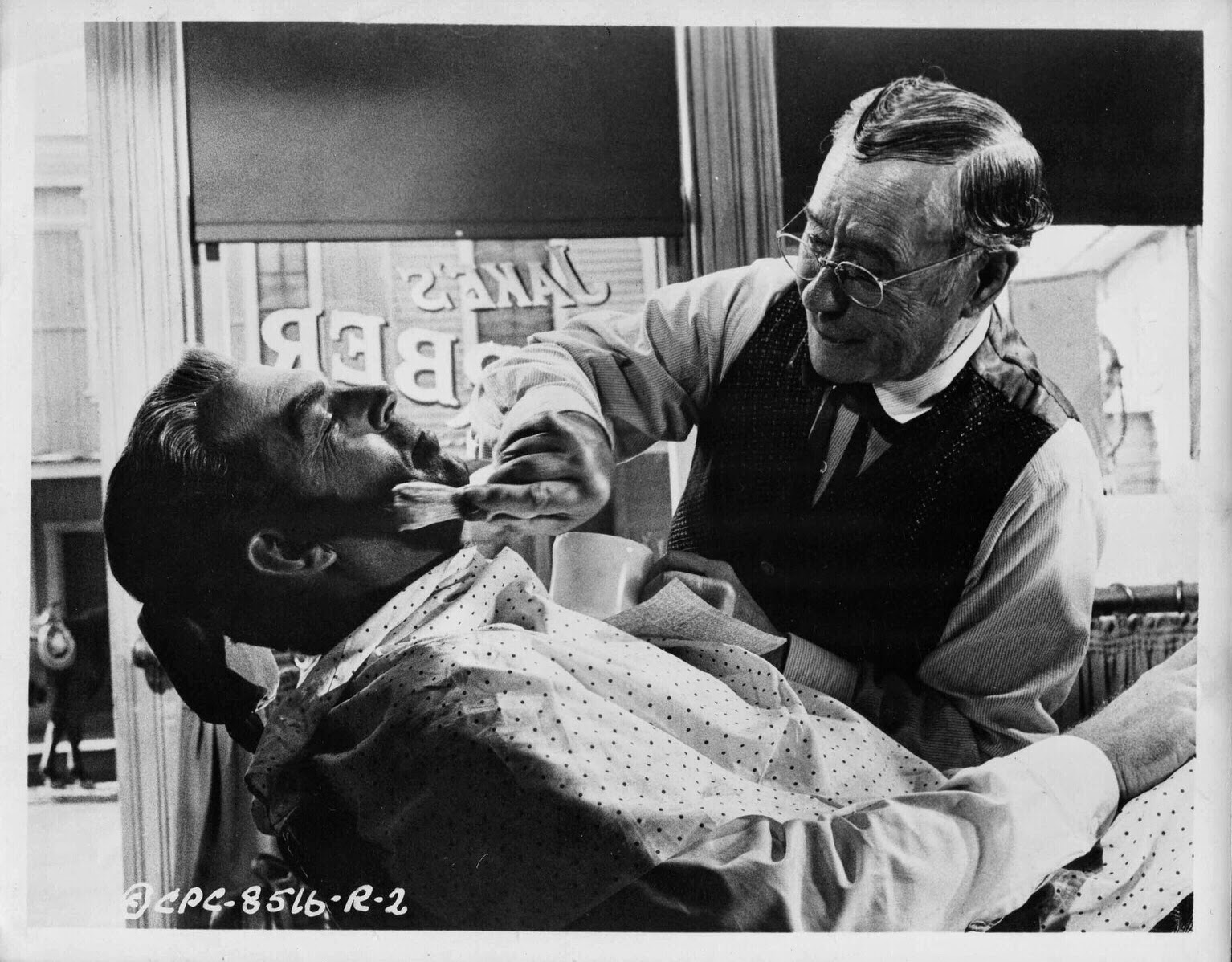 Fred gets a shave from Paul E Burns
During Fred’s first-reel escape, the lawman in question draws a boot derringer and manages to hit the younger brother fatally at over 100 yards, on a horse, which is pretty good going. Still, plausibility isn’t one of the main qualities we expect from Westerns. Actually, the death of the boy, “You dumb punk kid,” as Fred affectionately calls him, is handled rather movingly.


The fistfight in the saloon is well done, and benefits from the somber music accompaniment, and there’s a good final bit in a ghost town, although the stunt doubles are rather obvious (except for Coburn, I think). I liked the out-of-tune mechanical piano set going and then gradually winding down.


Face of a Fugitive is in fact a rather good 50s Western and I recommend it.