How many outlaws can you crowd into one picture?

There’s no getting away from it: Badman’s Territory is hardly one of the better Randolph Scott Westerns. The New York Times was quite generous when it called it “a lumbering action melodrama” and added that “Westerns seem to have a lot more life when told rapidly and concisely.” The day after, the Times’s sister organ The New York Daily News commented, “The quantity of events is not marked by the quality; in most of the conflicts the participants are too obviously a group of actors going rather awkwardly through the paces of a motion-picture scene.” 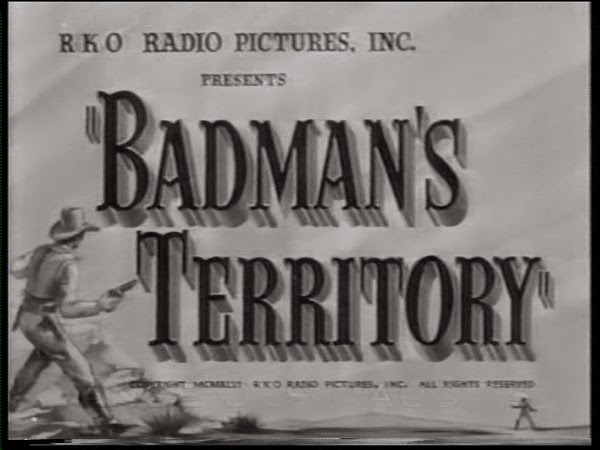 Worth a watch, but...
It has a totally preposterous plot and rather too much plot at that. In 1944 and ’45 Universal had had hits by grouping as many horror characters as you could think of in movies like House of Frankenstein and House of Dracula, in which Dracula, Frankenstein’s monster, wolf men, hunchbacks and mad doctors crowded the cast list, and RKO must have thought they would have a go at that with outlaws. They would put the James gang, the Daltons, Sam Bass and Belle Starr all in the same movie. Surprisingly, it was a box-office success. The pubic liked it. Mind, Hollywood is still pulling that trick, with cartoon superheroes jostling cheek by, er, jowl in blockbusters of unending direness.


Never mind history. In this one a character recounts how, after the Coffeyville bank raids that did for the Daltons (1892), “They got the James boys. A man named Ford shot Jesse and the law got Frank.” This of course was 1882. But hey, who’s counting? It is a fact that the James boys, the Daltons, Sam Bass and Belle Starr never congregated in any year in Quinto, or indeed anywhere else, but well, it’s all a bit of fun, n’est-ce pas?


Randy is honest county sheriff Mark Rowley who is railroaded by a corrupt and sadistic US marshal (Morgan Conway). 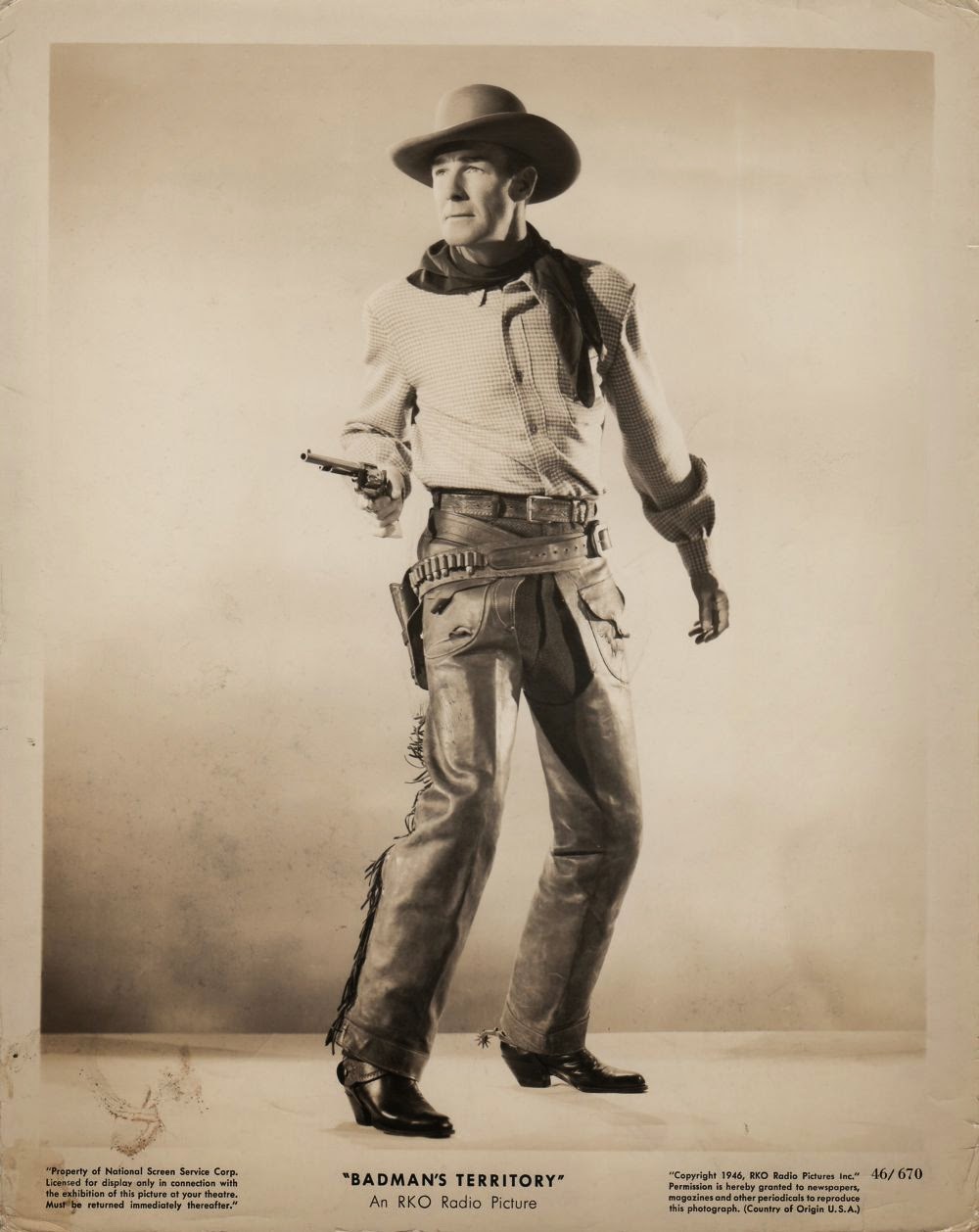 Randolph the Great
Johnny Rowley (James Warren, briefly popular when he stood in at RKO during Tim Holt’s wartime absence) is the sheriff’s younger brother who is tempted by the dark side and finally rides off with the wicked Dalton brothers (Steve Brodie as Bob, Phil Warren as Grat and William Moss as Bill – they always put Bill in for some reason; no sign of Emmett). The action is centered on the town of Quinto, the ‘capital’ of the outlaws’ homeland in the Oklahoma strip. Naturally there is a dishonest saloon keeper in Quinto, with the 3:10ish name of Ben Wade (Richard Hale) and a dubious colonel running the place (Ray Collins). There follows a highly complex series of plot developments which you need to work hard at to keep up with.


Of course there is a comic old-timer sidekick and naturally this is Gabby Hayes. Equally naturally there are a couple of dames. The rather lantern-jawed Australian Ann Richards plays an English newspaper editor (they called her English to get round the odd accent) for Randy to fall for and there’s the de rigueur rather more louche saloon gal, played by Virginia Sale. It’s Indian Territory, technically, so RKO thought we better throw Chief Thundercloud in there. And that isn’t half the cast. You see, it’s pretty crowded in Quinto, with all those clichéd stock characters walking about. 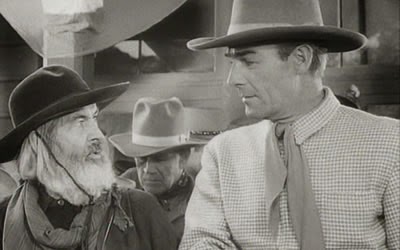 Gabby is Coyote
Lawrence Tierney is Jesse James, which is good. I always like a Tierney and Lawrence was just as much a rowdy as his brother Scott Brady and ideal as the hooligan outlaw. Lawrence didn’t actually do many Westerns, more’s the pity, though in one of them, Best of the Badmen in 1951, he was Jesse James again. Tom Tyler (star of silent and early talkie Westerns, Captain Marvel and small player in many a John Ford oater - he was Luke Plummer in Stagecoach - as well as a host of TV shows in the 50s) is brother Frank but, as so often in Jesse James movies, he is just a minor character to be ordered about. Nestor Paiva is enjoyable (he always was) as Sam Bass, who naturally organizes a horse race, and I must say that Isabelle Jewell makes a lovely Belle Starr – who wins the race. If you have ever seen a picture of the real Belle Starr, you might think she was a touch too beautiful. She would have been a much better bet for Randy than the snooty editor lady. 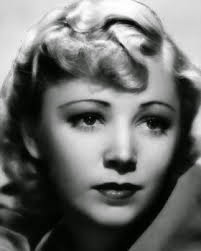 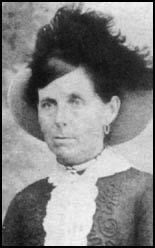 The real Belle
RKO got Tim Whelan to direct, the Thief of Bagdad man. Badman’s Territory was his first Western and he only did three, though one, Rage at Dawn, another outlaw-brother yarn, this time about the Renos, wasn’t at all bad and also starred Randolph Scott. Four people (Jack Natteford, Luci Ward, Clarence Upson Young and Bess Boyle) worked on the screenplay of Badman's Territory and it may have been a question of too many cooks. At any rate the script is a pretty corny mish-mash of clichés. 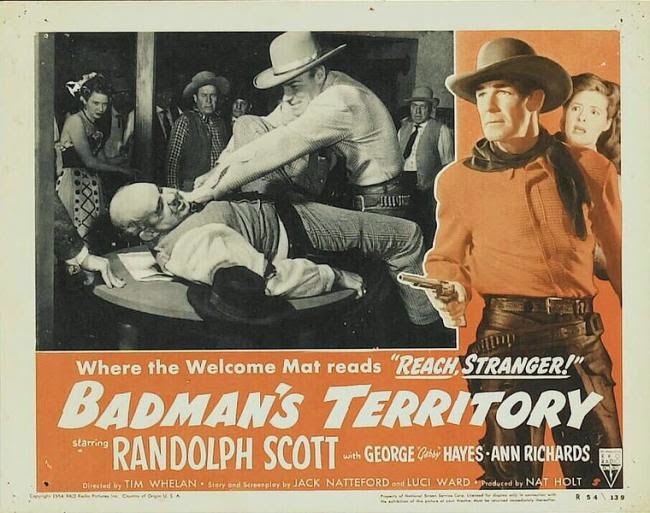 Quinto: where the welcome mat reads Reach, stranger!
Well, clunky it may have been but people went to see it. So much so that in 1948 (oh, golden year) they made a sequel (in which the Daltons strangely came back to life), Return of the Badmen, and it was one of those cases where the sequel was a lot better than the original. Return is a hugely enjoyable Western with an equally preposterous plot but a vast amount of energy. It’s a ‘proper’ Western, the sort my dad liked. It was directed by Ray Enright, altogether a better proposition, and despite having several of the same writers as Badman’s Territory was a tighter, better-constructed Western with zip and pzazz; plus, they added The Sundance Kid and Billy the Kid, so you get even more outlaws. I recommend it.


As for Badman’s Territory, well, yes, it’s a Randolph Scott Western of the 1940s and as such is definitely worth a watch. Put your credulity on hold and enjoy it for what it is. But don’t expect too much. No one would put it at the top of the Randy list.