Showdown at Abilene is a bog-standard Universal Western of the mid-1950s with all that that implied: quite high production values, good (Techni)color and nice photography (Irving Glassberg again) of attractive Western locations, solid if uninspired direction and script, slightly B (but not C) stars, and generally quite a lot of fun. Showdown could easily have starred Jeff Chandler or Audie Murphy. In fact they went for stuntman Jock Mahoney.


As a boy I was very keen on The Range Rider on TV and thought Jock one of the best screen cowboys, but small boy fans are not notorious for their perceptive appreciation of acting skill and as I grew I realized that Mr. Mahoney was a bit on the wooden side as a thespian. He wasn’t at all wooden when in action. Au contraire, he was fluid, athletic and positively poetry in motion. You should see the way he rides and dismounts and generally throws himself about. But when it comes to verbal interaction he just stands there to attention, saying his lines and waiting for his cue. I still like him though.


The best thing about Showdown, as was often the case with Westerns come to think about it, was the chief baddy. It’s Lyle Bettger. I always thought Lyle one of the best smoothie villains. That supercilious smile and slicked-back blond hair. A decade earlier and the part would have gone to Victor Jory but Lyle is just great. 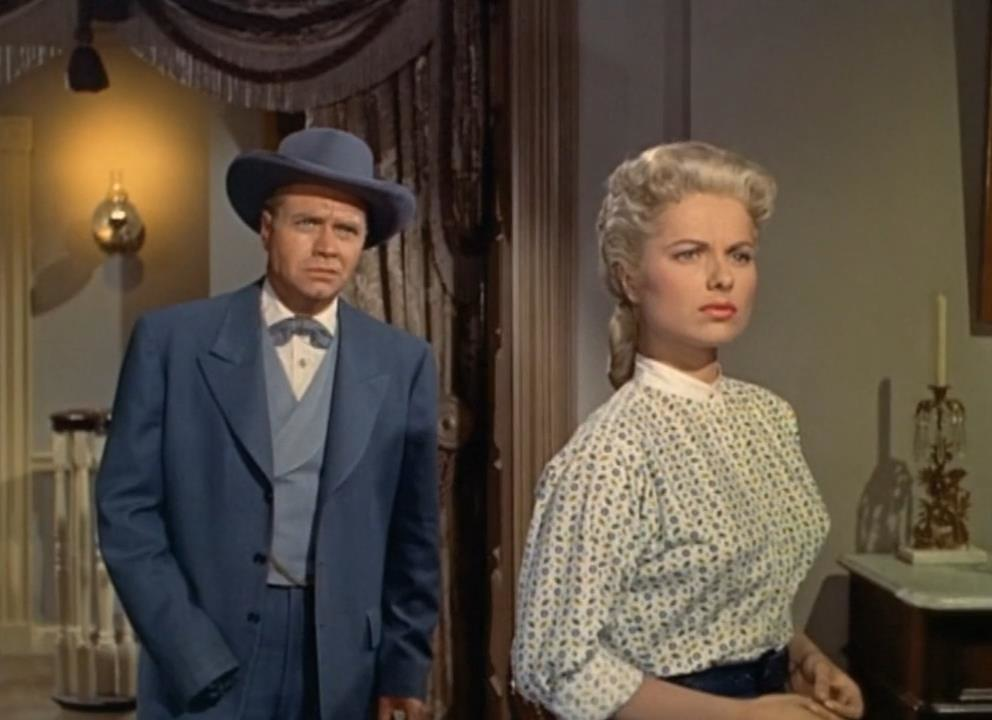 Lyle Bettger, one of the best villains. He lusts after Peggy but she doesn't seem too keen.
He plays Dave Mosely, ex-farmer but now big cattleman, unscrupulous, scheming owner of the town who has his henchmen in key positions, notably the sheriff’s office. We are led to believe that he had the former occupant of the office murdered and installed Dan Claudius, a thug. I wondered if there were Hamletic undertones to his name but I don’t think so. It’s Ted De Corsia. Ted’s another I always liked as a heavy. He embodied the word brawn. He is brawn made flesh. 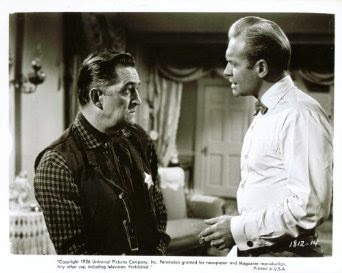 Brawny Ted the sheriff
His Brooklyn streets upbringing probably made him better in gangster movies but he was still damn good in a Western. Late in Showdown he murders his boss and assumes the mantle of principal villain. The eponymous showdown is with him. So it’s an unusually big role for Ted.


The director was the rather pedestrian Charles Haas (B-movies and TV) but the pace is alright. There could perhaps have been more action. There’s one interesting mise en scène with a mirror in the store but most of the shots are pretty static and conventional, which worsens Mahoney’s woodenness. Jock and his female lead Martha Hyer weren’t really the ideal ones for subtle interaction or noirish wordplay. Ms. Hyer (Mrs. Hal B Wallis) later got an Oscar nomination for a flick with Frank Sinatra but in all honesty… 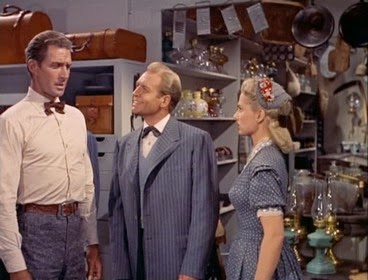 Jock a bit wooden...
David Janssen is in it, as the deputy. The future Dr. Trimble wasn’t at all bad, in fact. He was in four Western movies and quite a lot of TV stuff, especially if you count narrating Centennial. Pity he didn’t do more oaters, though. He could have been a good tough marshal or something. Dr. Trimble is the deputy
Showdown is the old one about the fellow who goes about unarmed, even as marshal. He has “had enough of guns” in the war, he says (he is a returning Reb). Of course we know in these cases that he is bound finally to shoot it out with the bad guy. It’s only a question of when he’ll pick up that six-shooter. In the face of force majeure, those who have hung up their irons don't not stick to their guns. If you follow me and forgive the syntax. The film also has the even older 'honest homesteader vs. ruthless rancher' plot. One character says to Jock, “You’re gonna have to pick a side.” Of course we already know he will line up with the sodbusters.


There’s a slightly interesting twist with badman Bettger having only one hand. He lost the other in an accident for which our hero, his childhood chum, blames himself. Bettger says the disability means that he cannot shoot, but he has been secretly practicing for years left-handed and is a dead shot. There’s another twist involving Bettger’s brother.


Well, it all pans out in the end as we kinda knew it would. Jock beats the bad guy and gets the girl. No spoiler here. 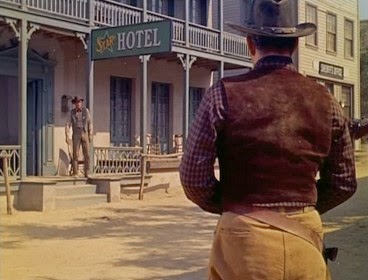 The showdown
Producer Howard Christie liked the movie so much that he did a remake a decade later, but Gunfight in Abilene (Universal, 1967) starred Bobby Darin (and Leslie Nielsen in the Lyle Bettger part) and wasn’t a patch on the original.


If I were you, I would not turn my nose up at Showdown at Abilene. No great classic of the genre, it is nevertheless a perfectly acceptable B-Western of the period and has several aspects that make it worth a watch. And the title is as close to pure Western as you are going to get. 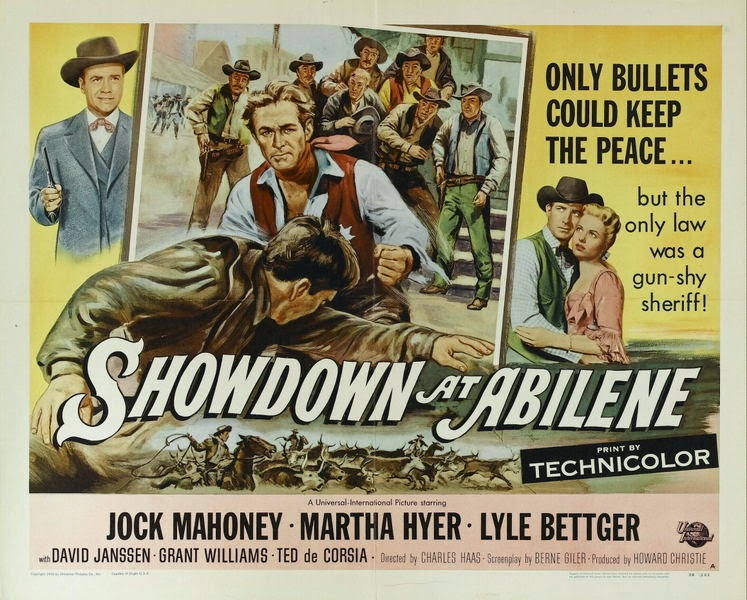 Funny thing: in the poster Lyle hand has his right hand back