While Italians were churning out cheap ‘westerns’ in Spain in the late 1960s, a few Americans were trying the same formula in Utah. They produced ‘American spaghetti’, what you might call burger westerns perhaps, cheap knock-off oaters with a slightly modern twist. Fair enough. Small independent producers had always been making B (or C) Westerns. This one was the brainchild of Robert Dix, sixth-billed in the trashy Forty Guns and son of Richard. Dix was producer, star and writer of Five Bloody Graves so it’s hard to blame anyone else.


Howard Thompson in The New York Times said it was “a perfectly awful little Western without a single gory grave.” He had a point. It is pretty bad, though I would say marginally better than most spaghettis.


After the garish spag-like titles it’s an Arizona whites-against-Apaches story. The Indians are referred to as “Yaquis, the worst kind of Apaches.”

The ‘hero’ (Dix) is Ben Thompson. The name, if not the character of poor old Ben Thompson (1843 – 1884) was used again and again in Westerns, as I said the other day when reviewing Shotgun. None of the depictions resembled him in the least.

The real Ben Thompson
The real Thompson fought for the Confederacy, then the Emperor of Mexico. He gained a reputation as a gunfighter and became a habitué of Bat Masterson and the Earps in Dodge in the 1870s. He was hired in 1881 as marshal in Austin, Texas, where he was very effective.  Thompson was murdered at the age of 40 in San Antonio in the so-called Vaudeville Theater Ambush. Denver Pyle was Ben in The Life and Legend of Wyatt Earp on TV. In Five Bloody Graves Dix's Thompson is an errant gunslinger pining the loss of his murdered wife and seeking death, though he is the only character in the movie not to find it. Given the quality of the film he was responsible for, this seems a little unfair.


The only thing which marks this movie out as anywhere remotely different is the fact that it is narrated by Death as a voiceover. They used the voice of aging actor Gene Raymond. Death gets his fill of corpses.


Less of a narrative than a series of episodic flurries of action, it tells of how Ben rescues a woman (Vicki Volante) but she and her jealous husband (Ken Osborne) are then killed by Yaquis in a raid on their farm. There’s another plot of two wicked types who sell guns to the Indians, Clay Bates, played by Jim Davis, and his sidekick Horace (Ray Young). They murder an Indian woman who turns out to be the wife of another character, the half-breed Joe Lightfoot (John ‘Bud’ Cardos, a co-producer and in charge of stunts). Once Lightfoot finds out about it, he is seriously annoyed. All these characters then meet up with a wagon party in which Jim Davis’s co-stars appear: there’s a rather overweight Scott Brady, dude gambler, and cadaverous John Carradine, a lecherous preacher. They are accompanied by three saloon gals, Althea, Kansas and Lavinia (Tara Ashton, Paula Raymond and Julie Edwards respectively). These ladies provide a bit of love interest. 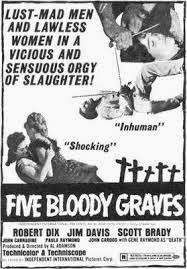 The men are not lust-mad. In fact they are very decorous mostly.
The rest of the story is about how this ragged party staggers on and one by one its members are killed, either by the Yaquis or each other.


The writing is pretty clunky and contains lines of the quality of “It’s quiet, too quiet.”


The Indians are simply nameless, characterless extras to shoot and be shot.


The sound quality and picture quality are poor. It needs remastering but wouldn’t be worth it. Amazingly, considering the dodgy camera work, the cinematographer was Vilmos Zsigmond, who had done the equally dire Deadwood ’76 in 1965 but who was later to produce visual masterpieces of the Western genre McCabe & Mrs.Miller (1971) and Heaven’s Gate (1980) as well as the fun Maverick in 1994. Something radical happened between Five Bloody Graves and McCabe & Mrs. Miller. Maybe Vilmos met Mephistopheles or did a Robert Johnson-type deal at a lonely crossroads.


The editing (Bill Faris and Pete Perry are ‘credited’) is lousy, with key climax moments skipped (perhaps for censorship reasons) so that we have the build-up and aftermath but not the deed.


The director was Al Adamson, who made a slew of cheap movies for the drive-in market. He directed six Westerns in all, all bad.


The best bit is when preacher Carradine shoots Horace with a derringer. 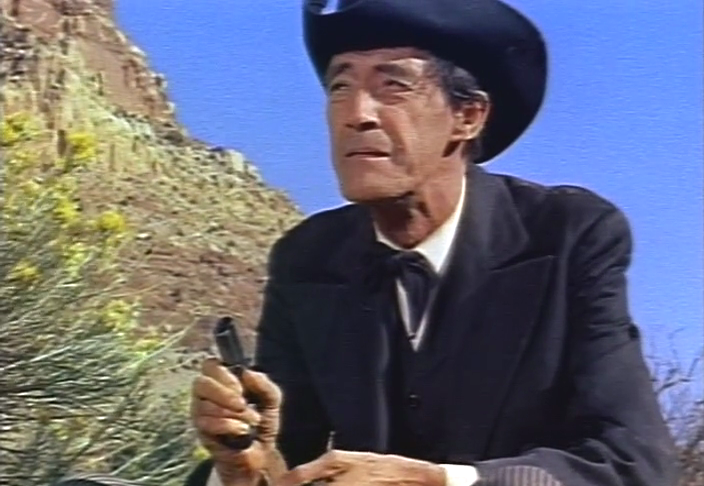