A noirish B-Western from that great year of 1948

1948 was a splendid year. It saw the birth of Jeff Arnold, Western blogger extraordinaire, for one thing. For another, it produced some of the best Western movies ever made. 1948 was the year of major works like Red River and Fort Apache, truly great works of Howard Hawks and John Ford respectively. It was also the year The Treasure of the Sierra Madre came out, if you consider that a Western. But it was the time of smaller but still outstandingly good pictures such as Yellow Sky with Gregory Peck, The Man from Colorado with Glenn Ford and William Holden, and Four Faces West with Joel McCrea. Worth a look, too, is Fury at Furnace Creek with Victor Mature.  Noir was in fashion and Westerns such as Blood on the Moon with Robert Mitchum appeared. Randolph Scott graced three oaters, Albuquerque, Return of the Bad Men and Coroner Creek. Blood on the Moon, Coroner Creek and Albuquerque were all filmings of novels by the great Luke Short, and yet another Short story was made into the excellent little Station West, which we’ll look at today. Yup, ’48 was a great year alright. If you include all those Roy Rogers and Bill Elliott pictures, as well as many other programmers, audiences that year were able to see 126 Westerns, no less, on the big screen. Oh, happy day.

Annus mirabilis
Station West starred Dick Powell. Now Powell (1904 – 1963), who had been a jazz singer before entering movies, played a lot of affable juveniles before discovering a talent for the hard-boiled. In 1944 he starred in the first of a series of gangster noirs, as Philip Marlowe (the first film Marlowe) in Murder, My Sweet, and he was Marlowe again on radio. Movies like Cornered, Johnny O’Clock and Cry Danger made him the pre-eminent Hollywood tough guy, and if you wanted a hard private eye, you couldn’t do better. With Westerns a staple of all the studios, big and small, it was natural that this tough-guyhood of Powell’s would be applied to the genre of oater, and, if you exclude the musical comedy Cowboy From Brooklyn (1938), and you would be wise to, then Station West was his first proper Western. 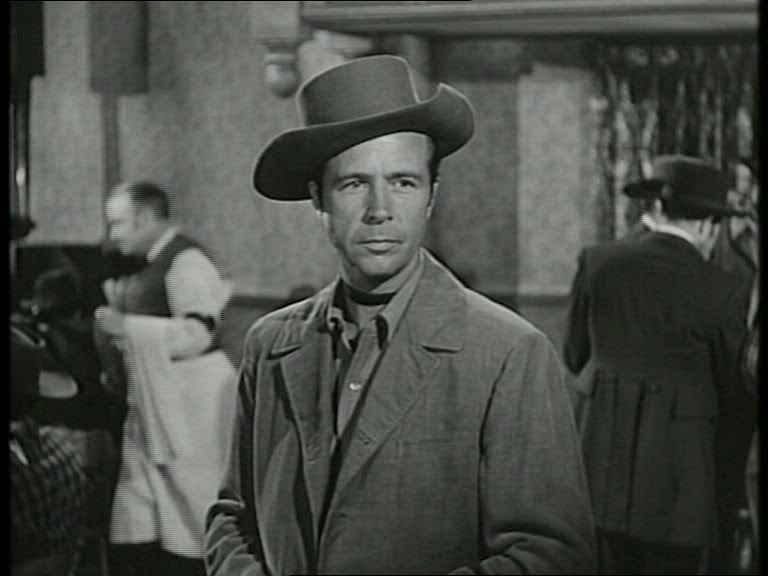 Powell doing his tough private eye act
Powell played all his Western leads as if he were in a black & white private-eye story, wisecracking and tough-guying all over the set, but in a quiet, understated, powerful way. In Station West he plays an undercover Army man investigating the murder of two soldiers in a gold robbery. The ideal role for Powell, really.


There is a song sung by Burl Ives over the titles, in that wonderfully honeylike voice he had, and Ives plays the cynical/wise hotel clerk, somewhere between the fool and the chorus, in a charming performance. This was his first Western and he went on to appear in 23 altogether, including some of Dick Powell’s Zane Grey Theatre on TV. His finest Western performance was probably opposite Robert Ryan in the 1959 André De Toth-directed Day of the Outlaw, a superb film. 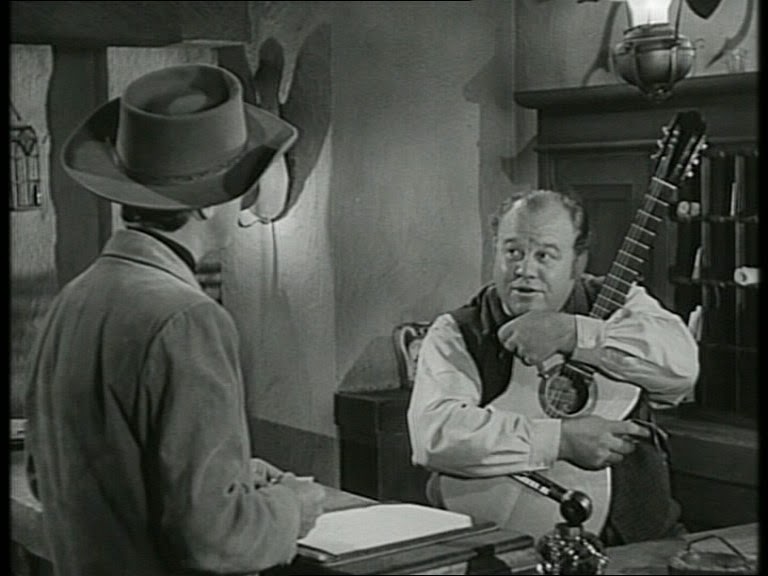 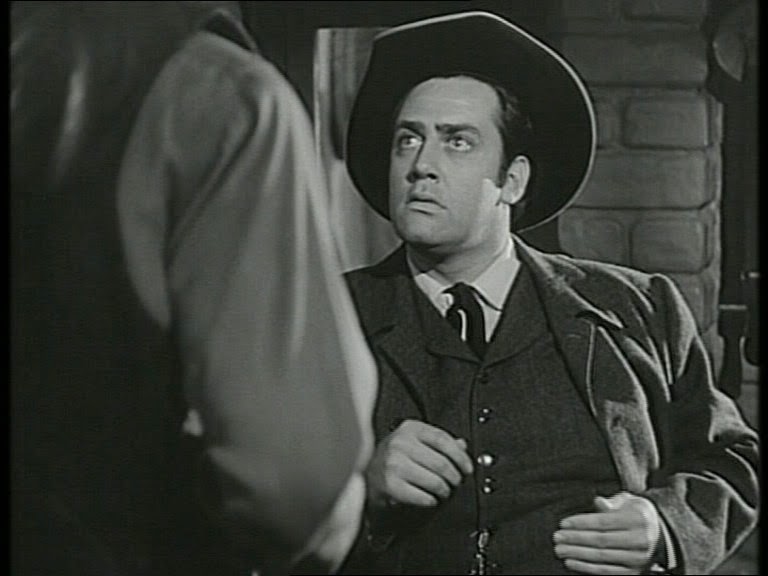 Burr: well cast as slimy lawyer
A young John Doucette is the barman. In true Luke Short fashion (and indeed in a classic set-up in so many Westerns) the hero has two dames (being Powell he probably would have thought of them as broads) to choose between. Jane Greer is particularly good as the conflicted Charlie, the saloon owner. 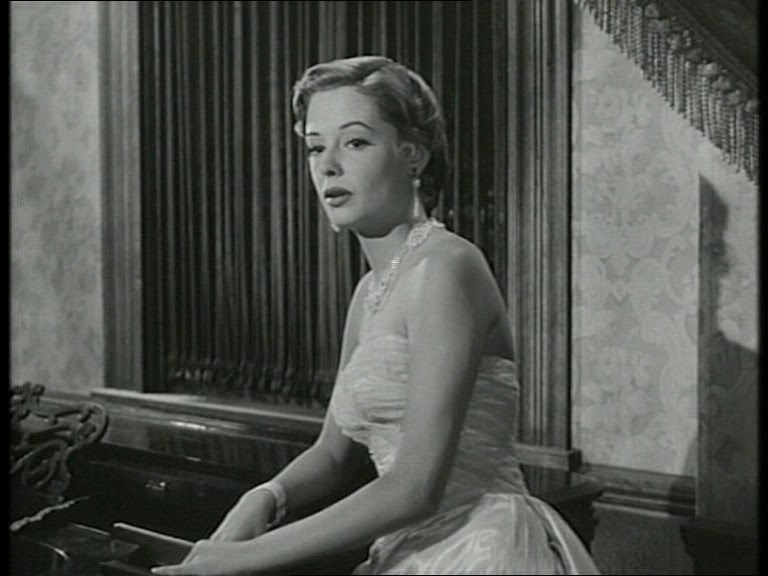 Greer very good
It was Greer’s second and last big-screen Western, though she too appeared on Dick Powell’s TV show a few times. Director Lanfield had wanted Dietrich for the part but he was lucky to get Greer. Agnes Moorehead, in her first Western, plays an especially unscrupulous and unattractive mine owner. Director Lanfield called her ‘hatchet face’ and unkind as that was, there was an element of truth to it. She was to be Jesse James’s mother in Fox’s 1958 effort and she was in a lot of Western TV shows but she never really made it in a big-screen oater.


There’s a lot of skullduggery appropriate to what is basically a nineteenth century crime drama which could have been set at pretty well any era but which happens to be a Western. There’s plot aplenty but that doesn’t slow the action down too much.


The best bit is when Charlie gives Bristow a derringer: a classic use, this, of that pocket gun, as a female saloon owner slips one to a crooked lawyer in a suit. 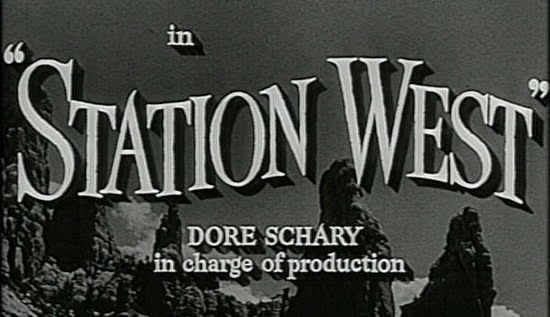 Worth a look
The movie was directed by Sidney Lanfield, his first Western. He went on to do loads of TV oaters, notably Wagon Train and The Deputy, but this was his only big-screen cowboy film. He didn’t do badly and the pace rattles right along. The writers who adapted Luke Short’s novel were Frank Fenton and Winston Miller. Fenton worked on River of No Return but also on some classy stuff like Escape from Fort Bravo and Garden of Evil. Miller had been the boy in The Iron Horse and later worked on talkie Westerns since the 1930s. He wrote the tight little Fury at Furnace Creek for Victor Mature in 1948 too, and reached Western heights working on the script of My Darling Clementine for John Ford. Both writers were experienced, more than competent and knew their onions.


So Station West is a taut little Western noir, definitely one of RKO’s better efforts and a worthy contributor to that golden year I so often drone on about.